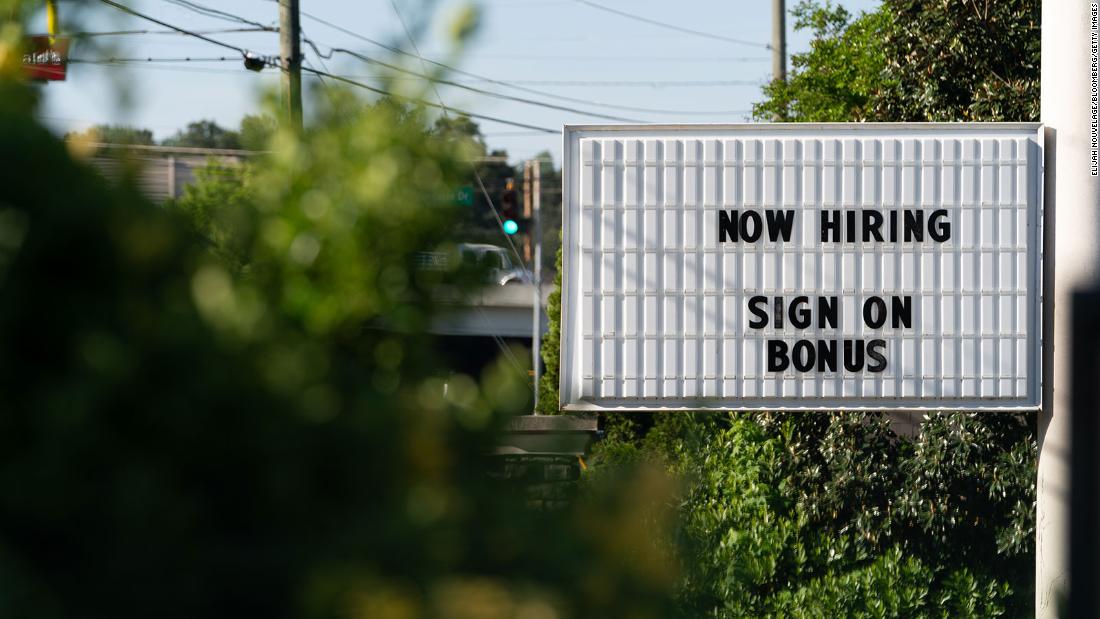 Many Republicans see these numbers and conclude the problem is unemployment payments that are, in their estimation, doled out to lazy people unwilling to work. Two dozen Republican-governed states have refused the federally funded $300 weekly unemployment supplement, and 36 states now require that anyone receiving unemployment benefits prove that they’ve looked for work unsuccessfully. Not content with red state refusal alone, Senate Republicans are trying to cut off the $300 benefit for the whole country. “We should not be in the business of creating lucrative government dependency that makes it more beneficial to stay unemployed rather than return to work,” Sen. Roger Marshall of Kansas, who is leading the Senate charge to cut off the benefit, wrote in the Kansas City Business Journal. In Michigan, the seven Republicans in their Congressional delegation are demanding an end to the federal supplement, contending in a letter to Democratic Gov. Gretchen Whitmer that: “Unfortunately, these benefits remain so robust that employees are more incentivized to stay home and collect unemployment than to go back to work.” In reality, researchers have found that the unemployment benefit’s impact on the labor shortage is fairly small. Think about it this way, write Nicolas Petrosky-Nadeu and Robert G. Valletta of the Federal Reserve Bank of San Francisco: “(in) each month in early 2021, about seven out of 28 unemployed individuals receive job offers that they would normally accept, but one of the seven decides to decline the offer due to the availability of the extra $300 per week in UI payments.”That hasn’t stopped conservative groups from blaming the labor shortage on basic support for workers. The Chamber of Commerce released a statement saying that “the $300 benefit results in approximately one in four recipients taking home more in unemployment than they earned working.” And that’s a big part of the problem: It’s not that unemployment benefits are too high — $300 a week barely covers the rent for the average family in most US states. It’s that pay is far too low.

This should be a wake-up call for a country that has spent decades mistreating, neglecting and radically underpaying its workers.

Consider: The US has not raised the federal minimum wage in more than a decade, and $7.25 an hour was a paltry sum even then. If today’s minimum wage were commensurate with productivity increases over the last 50 years, it would be $22 an hour. Workers’ purchasing power has been stagnant for 40 years, and even though workers are more productive than ever, their compensation has barely budged since the 1970s. Even more egregious is the minimum wage for tipped workers, which is an insulting $2.13 an hour, a number that hasn’t gone up in 30 years. Progressive advocates are pushing for a $15 hourly minimum wage, a more than reasonable ask, although woefully inadequate: a $15 wage would still not cover the basic living expenses and necessities of a family of four in much of the country. As it stands, some of the country’s largest employers of low-wage workersare seeing their companies’ paltry pay subsidized by the federal government. McDonalds and Wal-Mart, for example, pay their employees so badly that they are among the top employers of Americans who rely on Medicaid for healthcare and food stamps for basic sustenance, according to a study last year by the Government Accountability Office. When 70% of recipients of federal aid work full-time, according to the study, and are still so poor they qualify for help from the government, something has gone very, very wrong. It’s clear that employers are being given free rein to exploit their workers, while the government picks up the tab. Some employers say that they simply cannot afford to pay a living wage. But that failure should fall on the business, not on would-be employees. Businesses have been badly hurt by the pandemic, and while they’ve received some governmental support, it’s been wildly inadequate. But even outside of pandemic times, workers were struggling, while too many businesses felt entitled to a steady supply of poorly-paid workers, often assigning them unpredictable and exhausting schedules that came along with inconsistent income. That is not a good or sustainable business model, and it’s not one we should return to. But it’s likely not just too little pay keeping would-be workers from surging into the workforce — there is also fear of illness (Covid still isn’t over), lack of affordable childcare and a general recalibration of priorities and goals after a once-in-a-century pandemic. That recalibration is happening at every level, as white-collar employees push for greater workplace flexibility and their employers navigate how to structure the return to the office.The big difference is that when the typically better-educated and better-paid office workers revolt against inflexible workplaces and bosses who make what they believe to be unreasonable and potentially physically dangerous demands, we generally applaud them — and increasingly, their employers are taking note and working to create workplace policies that give employees at least some of what they want (especially if what they want is remote work, which can mean employers get even more of their employees’ time for less money). But when lower-paid wage workers revolt against meager wages, jobs that put them on the front line of potential Covid infection and workplaces that are often rife with harassment, abuse and disrespect, they’re often treated like ingrates leeching off the government dime. Covid brought to the fore — and exacerbated — just how unequal our country is. Despite shutdowns wreaking havoc on the economy, well-compensated and disproportionately college-educated workers were much more likely to have kept their jobs or seen their employment recover than workers with a high school education or less working in lower-paid fields; they even managed to save significant amounts of money, which many of them have been pouring into down payments on new homes. There’s also a stunning racial gap in both Covid infections and deaths and Covid-related unemployment. All of the statistics we heard about women being pushed out of the workforce when schools and childcare facilities shut down? Those women were disproportionately Black mothers, single mothers and mothers without a college degree. A pandemic that upended so many of our lives and killed more than half a million Americans was bound to make a lot of us reconsider how we were living before. Our country may treat wage workers as disposable automatons, but if the past year has taught us anything, it should be how much we need the folks who deliver our food, stock our grocery store shelves, care for our children and tend to our ill and aging. After a year of being deemed “essential,” many of these same folks are no doubt wondering why they aren’t treated as such: why they aren’t paid enough to afford food and rent, why they have to tolerate sexual harassment on the job, why they’re given so little of the autonomy and responsibility that all workers need to feel valued and satisfied. It’s about money, yes. But it’s also about a desire to be treated like a human being.

The solutions are not that complicated. A $15 federal minimum wage is the baseline; really, we should triple it, and do away with the tipped minimum wage entirely. High-quality universal childcare should be at the top of the government’s To Do list to ensure that no parent has to choose between work and their children’s care. Next on that list should be paid sick and vacation days, paid parental leave and laws mandating predictable work schedules. And workplaces simply need to be more humane, with employers and bosses treating their employees like trustworthy adults, not potentially naughty children in need of constant control and hyper-surveillance.

This is a difficult time for many businesses, especially the restaurants, bars, shops and small businesses that were hit hard by Covid shutdowns and regulations. I imagine most Americans would say that it’s these businesses that keep our communities vibrant, and we desperately want them to recover. They absolutely deserve support from both customers and the government in getting back on their feet.

But so do their employees who are, after all, the people who make our most beloved places so great.

In a since-deleted tweet responding to a question about a potential contract extension for Kansas City Chiefs safety Tyrann Mathieu, Mathieu tweeted that he's "probably not" going to get a new deal in … END_OF_DOCUMENT_TOKEN_TO_BE_REPLACED

KANSAS CITY, Mo. — A manhole left uncovered is the source of concern after a woman damaged her car in Kansas City. The single-car crash happened at 11th Street and Tracy Avenue during the busy … END_OF_DOCUMENT_TOKEN_TO_BE_REPLACED

Kansas City, Missouri's COVID-19 emergency order was set to expire at the end of the month. But Mayor Quinton Lucas made it clear Friday that private businesses can still set their own rules.Any … END_OF_DOCUMENT_TOKEN_TO_BE_REPLACED

KANSAS CITY, MO (KCTV/AP) — All restrictions meant to slow the spread of the coronavirus were being rescinded as of midday Friday in Kansas City, Missouri, following guidance from the U.S. Centers for … END_OF_DOCUMENT_TOKEN_TO_BE_REPLACED