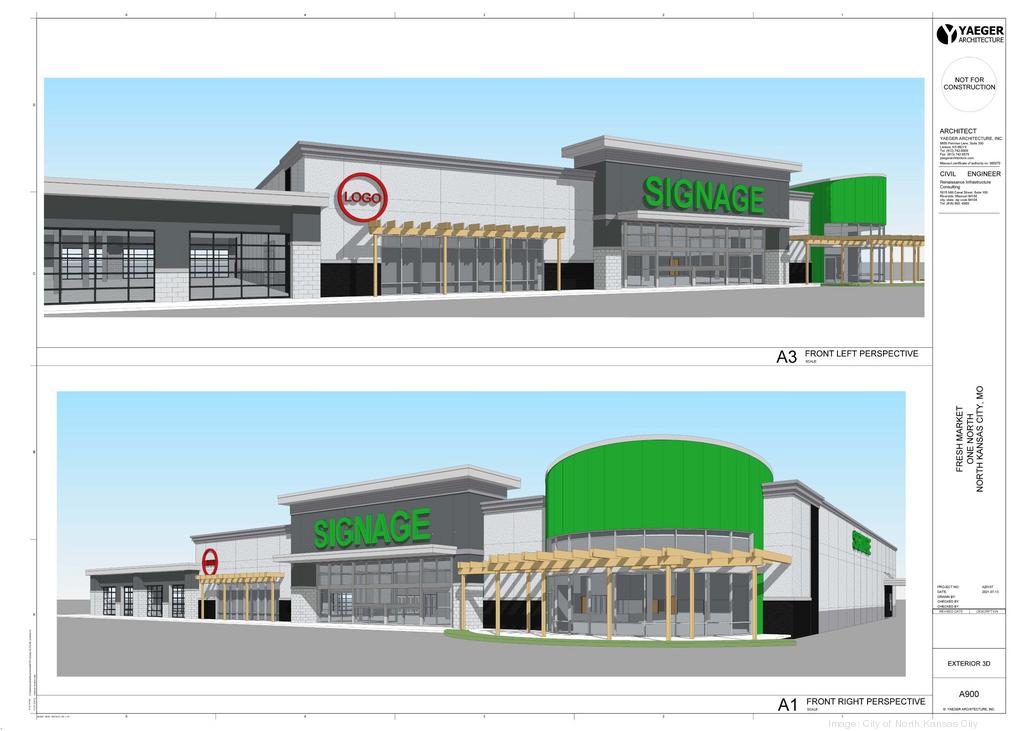 Developers are planning a 35,000-square-foot Fresh Market grocery store that could open in fall 2022 at One North. (Rendering courtesy of North Kansas City)

When it comes to sharing information on his real estate projects, Rick Worner says he’s “more of a groundbreaking kind of guy than an announcement kind of guy.”

That said, the master builder for One North was pleased to see dozens of area residents interested in two of the mixed-use development’s next upcoming components, during a two-hour open house Wednesday afternoon at the project’s dual-branded Aloft and Element hotel, southeast of Interstates 29/35 and Armour Road.

Worner, of Overland Park-based National Realty Advisors, has partnered with Milhaus, of Indianapolis, to build a $47.6 million apartment complex with 272 market-rate units.

Compared to O’Reilly Development Co.’s The Backyard at One North, a 240-apartment community that opened last year, the as-yet unnamed Milhaus project will see its units distributed across six standalone multifamily buildings, versus one larger structure wrapped around amenities. Planned features include a shared pool, clubhouse and dog park.

One North also will see a Fresh Market location built on 2.9 vacant acres northeast of the 64-acre redevelopment site’s apartments and hotel. At 35,000 square feet, the full-service grocery store is planned to feature a modern design and layout, offering fresh produce, baked goods, meats, dairy and a floral section.

Worner said the two projects will be complementary — “With the apartments that are open across the street, that are almost all full … and then with these, you’re creating enough critical mass to support the grocery store long-term.”

Read more about the project in the Kansas City Business Journal

In a since-deleted tweet responding to a question about a potential contract extension for Kansas City Chiefs safety Tyrann Mathieu, Mathieu tweeted that he's "probably not" going to get a new deal in … END_OF_DOCUMENT_TOKEN_TO_BE_REPLACED

KANSAS CITY, Mo. — A manhole left uncovered is the source of concern after a woman damaged her car in Kansas City. The single-car crash happened at 11th Street and Tracy Avenue during the busy … END_OF_DOCUMENT_TOKEN_TO_BE_REPLACED

Kansas City, Missouri's COVID-19 emergency order was set to expire at the end of the month. But Mayor Quinton Lucas made it clear Friday that private businesses can still set their own rules.Any … END_OF_DOCUMENT_TOKEN_TO_BE_REPLACED

KANSAS CITY, MO (KCTV/AP) — All restrictions meant to slow the spread of the coronavirus were being rescinded as of midday Friday in Kansas City, Missouri, following guidance from the U.S. Centers for … END_OF_DOCUMENT_TOKEN_TO_BE_REPLACED