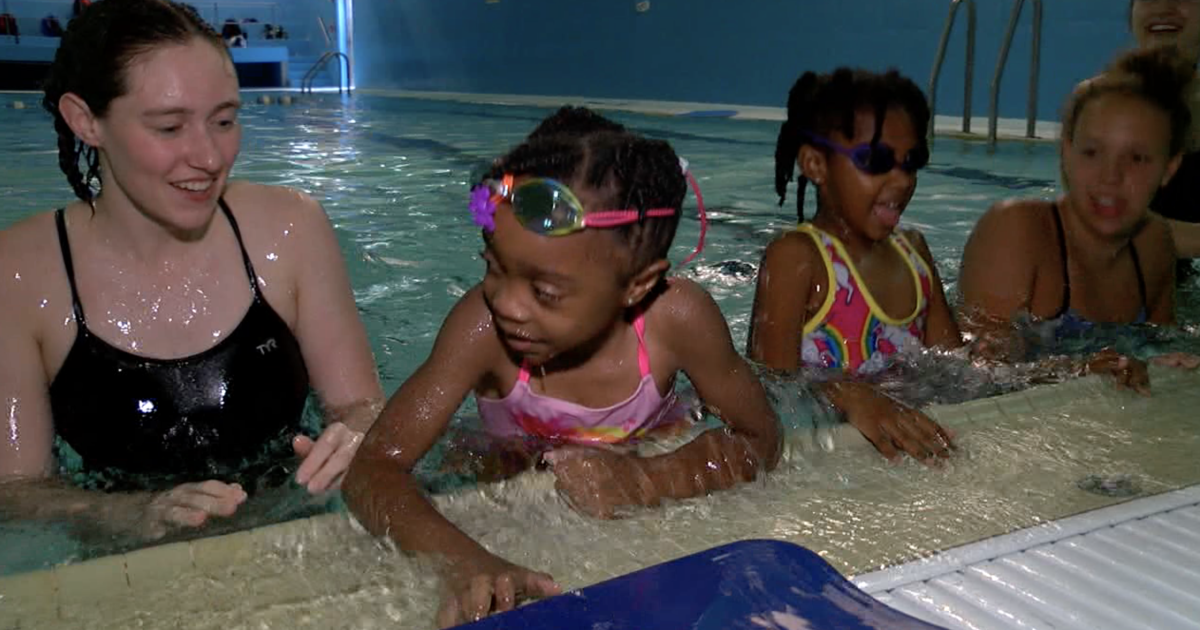 OVERLAND PARK, Kan. — Meha Asir admitted she was a late bloomer by competitive swimming standards. But the 15-year-old from Lee’s Summit, Missouri, is making up for lost time. As a member of the Empire KC Swim Club, she’s leading the charge to teach younger children how to swim.

“It’s so fun seeing them have fun and being introduced to something I love so much,” Asir said.

The swimmer and her teammates are teaching about 80 students at Boys and Girls Clubs of Greater Kansas City how to swim this summer thanks to a partnership between the organization and the Shikha Memorial Foundation Asir and her mother started. The foundation collects money to cover the costs of swim lessons, meaning the families of children in the pool with Empire KC don’t have to pay a dime for the lesson.

“There just aren’t that many outlets, particularly in the urban core, for a young person to learn how to swim,” explained Jason Roth, the Boys and Girls Clubs of Greater Kansas City’s vice president of resource development. “We’ve got the pools [at our Thornberry and J&D Wagner Units] and now with this partnership, we’ve got a great learning environment for kids to be learn how to swim safely.”

About 90 percent of the children in the Boys and Girls Clubs program are African-American. Data from the Centers for Disease Control and Prevention shows Black children are more likely to drown than their white counterparts, making these lessons all the more important.

“A lot of the pools we used to have in Kansas City have turned into splash parks, so no one really has the opportunity to learn how to swim,” said Carmen Menges, the Empire KC Swim Club coach. “Swimming is a life skill.”

Swimming turned Roeland Park, Kansas, teenager Catherine Fox into an Olympic gold medalist in 1996. In the years since standing on the podium, Fox has helped develop a learn-to-swim program available in New York and Texas called SwimJim.

Fox said she’s thankful her parents threw her in the water at a young age, before she developed a fear of the water.

“The way I responded was swimming like a fish,” Fox said. “To me, it just immediately felt comfortable and I just started to swim like that.”

Fox said a fear, or lack of confidence in swimming, is often passed down from generation to generation. She believes, even if becoming an Olympic swimmer isn’t the end goal, knowing the proper techniques, how to find safety and how to come up for air are invaluable skills.

Skills that children like 8-year-old Braedynn are now learning at the Boys and Girls Clubs pool.

“Thank you for all the good swimmers out there and thank you for teaching people how to swim,” Braedynn said during a lesson.

The Shikha Memorial Foundation is currently accepting donations to continue paying for swim lessons in the fall and spring. For information on how to donate, visit the organization’s website or Facebook page.

In a since-deleted tweet responding to a question about a potential contract extension for Kansas City Chiefs safety Tyrann Mathieu, Mathieu tweeted that he's "probably not" going to get a new deal in … END_OF_DOCUMENT_TOKEN_TO_BE_REPLACED

KANSAS CITY, Mo. — A manhole left uncovered is the source of concern after a woman damaged her car in Kansas City. The single-car crash happened at 11th Street and Tracy Avenue during the busy … END_OF_DOCUMENT_TOKEN_TO_BE_REPLACED

Kansas City, Missouri's COVID-19 emergency order was set to expire at the end of the month. But Mayor Quinton Lucas made it clear Friday that private businesses can still set their own rules.Any … END_OF_DOCUMENT_TOKEN_TO_BE_REPLACED

KANSAS CITY, MO (KCTV/AP) — All restrictions meant to slow the spread of the coronavirus were being rescinded as of midday Friday in Kansas City, Missouri, following guidance from the U.S. Centers for … END_OF_DOCUMENT_TOKEN_TO_BE_REPLACED