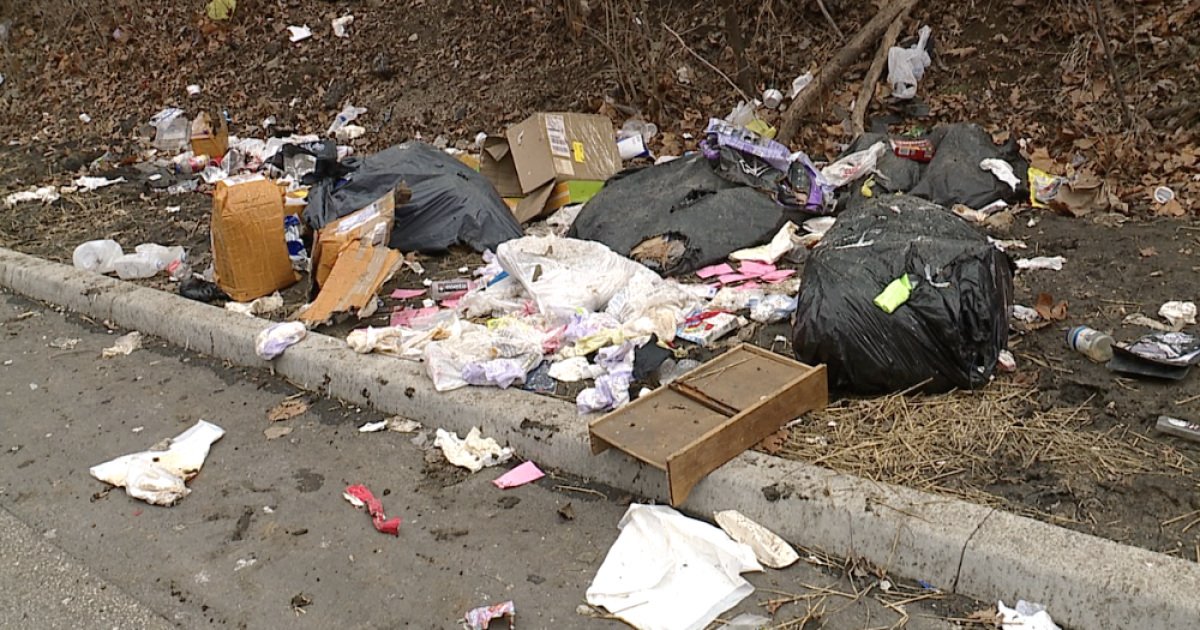 KANSAS CITY, Mo. — Neighbors near 50th and Brooklyn in Kansas City, Missouri are frustrated with the amount of illegal dumping taking place in their community.

“Is there words to describe frustration, there isn’t, because we live here and we are not this and so we do not want to be labeled this, this is not our trash,” Linda Brown, President of the Blue Hills Neighborhood Association, said.

Brown told 41 Action News that the community members do clean-ups year-round, but the site piles back up with trash.

“What we’re finding out is not the neighbors, the neighbors are doing a good job of keeping it clean, but it’s outsiders that are coming in our neighborhood making this happen,” Brown said.

On four separate occasions over the past year, Ashurst has found trash belonging to Dana Crawford, owner of Champwork Pet Supplies near 72nd and Prospect Avenue in Kansas City, Missouri.

The first time his trash was found, Ashurst let Crawford go with a warning, but has since issued three summons.

“Then I come out and literally a week later after having this exact same conversation and here’s his trash,” Ashurst said.

Crawford told 41 Action News that he hired an employee to take his trash to the city dump, and blames that employee for the illegal dumping. Crawford also stated the employee no longer works for him.

Over the phone, Crawford told 41 Action News he would go out to 50th and Brooklyn and clean up the trash.

Ashurst said he was told the same story when he issued Crawford a warning.

“It’s the same thing over and over again, people just aren’t listening or they just don’t care,” Ashurst said.

Regardless of who is to blame, residents just want their neighborhood clean and purchased cameras to put up in the area to put a stop to illegal dumping.

“We care about how our neighborhood looks and we don’t like it looking like this,” said Brown.

Anyone who locates an illegal dumping site or see someone illegally dumping their trash should 311.

In a since-deleted tweet responding to a question about a potential contract extension for Kansas City Chiefs safety Tyrann Mathieu, Mathieu tweeted that he's "probably not" going to get a new deal in … END_OF_DOCUMENT_TOKEN_TO_BE_REPLACED

KANSAS CITY, Mo. — A manhole left uncovered is the source of concern after a woman damaged her car in Kansas City. The single-car crash happened at 11th Street and Tracy Avenue during the busy … END_OF_DOCUMENT_TOKEN_TO_BE_REPLACED

Kansas City, Missouri's COVID-19 emergency order was set to expire at the end of the month. But Mayor Quinton Lucas made it clear Friday that private businesses can still set their own rules.Any … END_OF_DOCUMENT_TOKEN_TO_BE_REPLACED

KANSAS CITY, MO (KCTV/AP) — All restrictions meant to slow the spread of the coronavirus were being rescinded as of midday Friday in Kansas City, Missouri, following guidance from the U.S. Centers for … END_OF_DOCUMENT_TOKEN_TO_BE_REPLACED