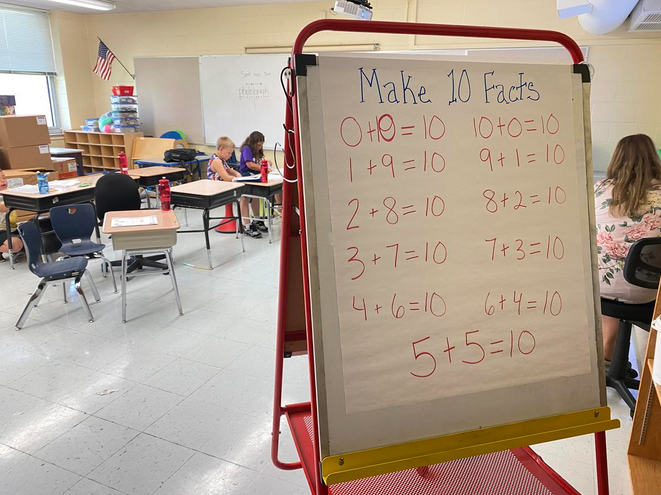 WICHITA, Kansas — One thing the world learned during the pandemic is that school kids lose pace when Zoom replaces the classroom.

“There
has been some academic slide,” said Andi Giesen, assistant
superintendent for learning services at the Wichita district. “On a
previous trajectory, we would have expected students to be maybe a
little farther along with their learning.”

In
the past, a relatively small fraction of students needed to spend the
dog days catching up with their classmates. Come fall 2021, a far larger
number of students across Kansas will enter their next grade without
the skills they should have picked up last year.

But
even more schoolchildren who need to catch up won’t go. Many students,
families and teachers say they need a break after a crazy year of
pandemic starts and stops, and they bowed out of summer school.

“It’s been a really incredibly hard year” said Kari Ritter, a Topeka teacher and coordinator of the district’s summer programs. “I think parents are ready to give their children a break. We’re definitely seeing that.”

Not long after Kansas Gov. Laura Kelly sent kids home from school more than a year ago, educators and politicians started talking about learning loss.

Congress approved three COVID-19 relief packages that will send about $130 billion directly to K-12 schools — money districts can spend to reopen safely and help kids who have fallen behind. Kansas will get about $1.3 billion over three years.

Still,
significant numbers of families weary from tending school-age children
during a year-plus pandemic don’t appear eager to rush to school this
summer.

“We’re really looking forward to just . . . having a good
time this summer,” said Emily Millspaugh, a mother of two who also
teaches pre-kindergarten in Maize. “All of our kids, their bodies are
craving interaction and movement and exploration that maybe they haven’t
gotten to do this school year.”

Millspaugh didn’t consider
enrolling her daughters, Murphy and Wren, in any kind of structured
school program this summer. Now that she and her husband are vaccinated,
they’re taking a beach trip that got canceled last year. The family got
a new labradoodle puppy, Ollie, and plans to just relax and play.

“We’re
looking forward to kind of making up for lost time,” Millspaugh said.
“And really having the opportunity to say, ‘Yes, let’s do these things,’
when we’ve had to say ‘no’ for so long.”

Wichita, the state’s largest school district, sent about 21,500 invitations to its summer programs
for students in kindergarten through eighth grade. Despite incentives
such as free breakfast, lunch and transportation, only 4,600 — about one
in five — enrolled.

“But I think this is every single year:
You’re going to invite a bunch of students, whether it’s a COVID year or
not, and you’re still probably only going to get half of them to come,”
said Amanda Kingrey, assistant superintendent of secondary schools in
Wichita. “So I think we fulfilled that (goal). ”

Teachers weren’t
quick to sign up either. The Topeka school district offered teachers
more than double the regular rate for summer school this year — money
they have onhand from the first round of federal aid — and still had a
hard time finding takers.

“It’s a very real challenge,” said
Ritter, the Topeka coordinator. “But on the flip side of that, we didn’t
get the enrollment that we envisioned either.”

Ritter’s eighth-grade daughter wasn’t interested in the catalog of classes and camps being offered in Topeka.

“I
asked about a couple of the fun classes, and she was like, ‘Nope!’ And
I’m OK with that,” Ritter said. “I completely am on board with her just
taking a mental break and knowing that next summer will be different.”

Other parents said they’re taking advantage of summer school
offerings to get their kids back into a routine and interacting with
teachers and peers.

“When they were at home for a period of time .
. . they definitely were not learning as much as they were in school,”
said Kristin Marlett, a Wichita mother of two.

She said she
wanted her sons, Oliver and Elliott, to get extra help with their
reading this summer, so she enrolled them in the half-day summer camp at
their Wichita elementary school.

“I feel like it’s not a
punishment for them to go to summer school, because I think they’re
going to have fun,” she said. “They love being around other kids, they
love learning, and they’re going to be great at it.”

It’s hard to
say precisely how far behind students might be after more than a year
of pandemic learning. The U.S. Department of Education waived federal
testing requirements after schools closed for in-person instruction last
spring.

States were required to administer the annual reading and math tests this year, but the Biden administration allowed for flexible options such as shortened tests and a longer testing window. Results from Kansas schools won’t be reported until July or August.

Education
officials say they can’t predict how long the recovery will take. But
they’re playing the long game, already planning for summer programs in
2022 and beyond.

“It may rebound quickly. We just don’t know,
because we’ve never been through this type of loss,” said Kansas
Education Commissioner Randy Watson. “But we’re hopeful that with
multiple summer schools, multiple extended years, tutoring services —
that we can make this up.”

Suzanne Perez reports on education
for KMUW in Wichita and the Kansas News Service. You can follow her on
Twitter @SuzPerezICT or email her at [email protected]

In a since-deleted tweet responding to a question about a potential contract extension for Kansas City Chiefs safety Tyrann Mathieu, Mathieu tweeted that he's "probably not" going to get a new deal in … END_OF_DOCUMENT_TOKEN_TO_BE_REPLACED

KANSAS CITY, Mo. — A manhole left uncovered is the source of concern after a woman damaged her car in Kansas City. The single-car crash happened at 11th Street and Tracy Avenue during the busy … END_OF_DOCUMENT_TOKEN_TO_BE_REPLACED

Kansas City, Missouri's COVID-19 emergency order was set to expire at the end of the month. But Mayor Quinton Lucas made it clear Friday that private businesses can still set their own rules.Any … END_OF_DOCUMENT_TOKEN_TO_BE_REPLACED

KANSAS CITY, MO (KCTV/AP) — All restrictions meant to slow the spread of the coronavirus were being rescinded as of midday Friday in Kansas City, Missouri, following guidance from the U.S. Centers for … END_OF_DOCUMENT_TOKEN_TO_BE_REPLACED