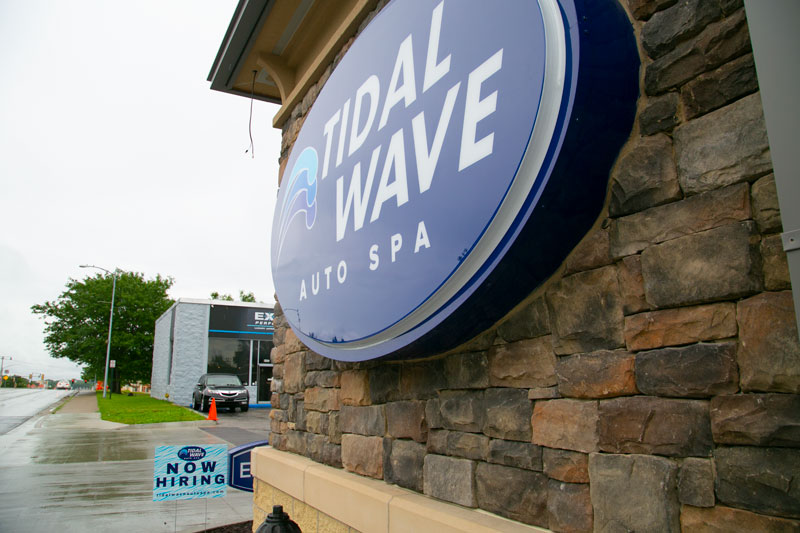 Although original plans called for a two-story building — which was the main point of opposition for councilmembers who voted against the project — the now-open Tidal Wave doesn’t go above one story.

The car wash features a vacuum bay for customers to clean out their cars, as well as an automatic car wash tunnel.

Tidal Wave Auto Spa of Mission is the third location in the Shawnee Mission area.

There is also one in Overland Park on Nieman Road and another in Prairie Village at 7930 State Line Road — which opened in June 2020.

The Mission franchise stands on the site once occupied by a Valero gas station and convenience store.

Customers can choose from four different car wash options ranging from a $10 tire shine to a $40 ceramic sea gloss option, which features rain repellent, underbody rinse and a rust inhibitor, according to Tidal Wave’s website.

In a since-deleted tweet responding to a question about a potential contract extension for Kansas City Chiefs safety Tyrann Mathieu, Mathieu tweeted that he's "probably not" going to get a new deal in … END_OF_DOCUMENT_TOKEN_TO_BE_REPLACED

KANSAS CITY, Mo. — A manhole left uncovered is the source of concern after a woman damaged her car in Kansas City. The single-car crash happened at 11th Street and Tracy Avenue during the busy … END_OF_DOCUMENT_TOKEN_TO_BE_REPLACED

Kansas City, Missouri's COVID-19 emergency order was set to expire at the end of the month. But Mayor Quinton Lucas made it clear Friday that private businesses can still set their own rules.Any … END_OF_DOCUMENT_TOKEN_TO_BE_REPLACED

KANSAS CITY, MO (KCTV/AP) — All restrictions meant to slow the spread of the coronavirus were being rescinded as of midday Friday in Kansas City, Missouri, following guidance from the U.S. Centers for … END_OF_DOCUMENT_TOKEN_TO_BE_REPLACED