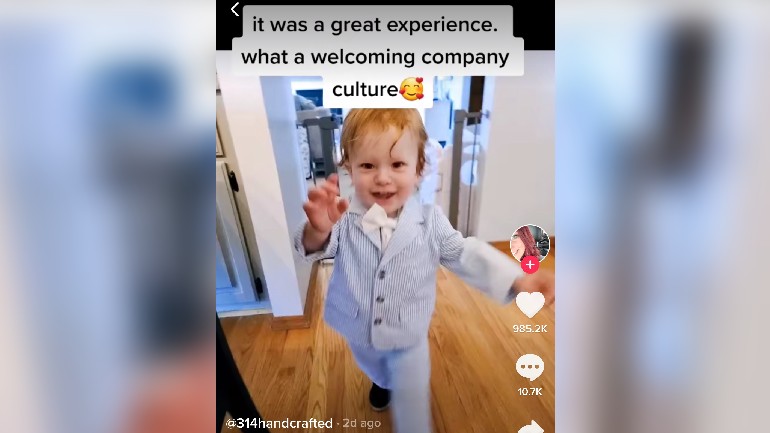 SOUTH COUNTY, Mo. – A St. Louis mother who was laid off due to the pandemic brought her toddler to a job interview – and the resulting TikTok video has been liked more than 1 million times.

Maggie Mundwiller had her first job interview at a company and was asked to come back for a second interview – but she had no child care option, KTVI reports.

The company told her that they are child friendly and invited her to bring her son, Mylo, to the interview.

Being a single mom during a pandemic, Mundwiller said there are challenges with finding childcare when in between jobs.

“We don’t have childcare yet and it’s because I’m staying home with (Mylo), but once I have a job, then we would have childcare. So when you’re stuck in that transition period and you don’t have it, I think there’s a lot parents who are left out,” Mundwiller said.

She added that her TikTok video has sparked conversations about a childcare crisis.

In the video she dresses Mylo in a dapper light blue suit, washes his stroller, and even writes him a resume.

Objective: To not find a job and eat all the snacks.

“It was a great experience. What a welcoming company culture,” Mundwiller said about the company.

She doesn’t know yet if she got the job.

Mundwiller is also the owner and designer behind 314 handcrafted.

In a since-deleted tweet responding to a question about a potential contract extension for Kansas City Chiefs safety Tyrann Mathieu, Mathieu tweeted that he's "probably not" going to get a new deal in … END_OF_DOCUMENT_TOKEN_TO_BE_REPLACED

KANSAS CITY, Mo. — A manhole left uncovered is the source of concern after a woman damaged her car in Kansas City. The single-car crash happened at 11th Street and Tracy Avenue during the busy … END_OF_DOCUMENT_TOKEN_TO_BE_REPLACED

Kansas City, Missouri's COVID-19 emergency order was set to expire at the end of the month. But Mayor Quinton Lucas made it clear Friday that private businesses can still set their own rules.Any … END_OF_DOCUMENT_TOKEN_TO_BE_REPLACED

KANSAS CITY, MO (KCTV/AP) — All restrictions meant to slow the spread of the coronavirus were being rescinded as of midday Friday in Kansas City, Missouri, following guidance from the U.S. Centers for … END_OF_DOCUMENT_TOKEN_TO_BE_REPLACED