It seems that memorable military operations just have to have a code name.

Somewhere along the way, the Missouri National Guardsmen who gathered from across the state to battle COVID-19 at 27th Street and Prospect Avenue in East Kansas City came up with their own.

The name captured the joy they saw — sometimes with tears — when they vaccinated a grandparent who hadn’t seen grandchildren for more than a year, or a Vietnam vet who had passed COVID’s winter with no visitors, or a couple yearning to visit friends again.

And it captured their pride: Task Force Freedom.

From the moment they had been thrown together, the camo-clad women and men realized the responsibility weighing on them, said Capt. Tony Rich.

“We were stewards of the vaccine,” he said. They came as if to the rescue of people whose “lives were on hold,” reaching out purposefully to the predominantly Black neighborhoods with the greatest health risks, and to people who were most vulnerable to the threat of COVID.

The pandemic is a generational experience of national distress, Rich said — one that future generations will hear of and wonder about and ask of their elders: “What did you do?”

These members of the Missouri Air and Army National Guard left their jobs — a financial advisor from St. Louis, a welder from Savannah, an EMT from Columbia, an electrician from Lee’s Summit, a housing property manager from Kansas City, others from Springfield, Branson, Lebanon.

Some spent weeks at a time away from family — a father of two sons, a mother of three, husbands missing wives, wives missing husbands.

They came because Task Force Freedom was freeing lives.

Just what it was they’d gotten themselves into wasn’t clear that first day. in mid-January. Two medics and six support personnel, sitting around a lunch table at a Northland Kansas City Denny’s.

This was not like the obviously dramatic orders some had gotten in the past: helicoptering over Hurricane Harvey flood waters to pluck marooned families from their rooftops; or supporting police forces and paramedics in the Ferguson, Missouri, civil unrest; or that of former full-time Guardsman Medic Jeromy Eslinger of Knob Noster, who served an extra tour in Iraq as a medical support on military convoys in a harrowing world of roadside bombs.

Here, said Medic Josh King, who would join the work in April, “we were fighting something invisible.”

Orders from Gov. Mike Parson deployed that first crew to Kansas City with a working plan to dispense vaccines with the Kansas City Health Department. 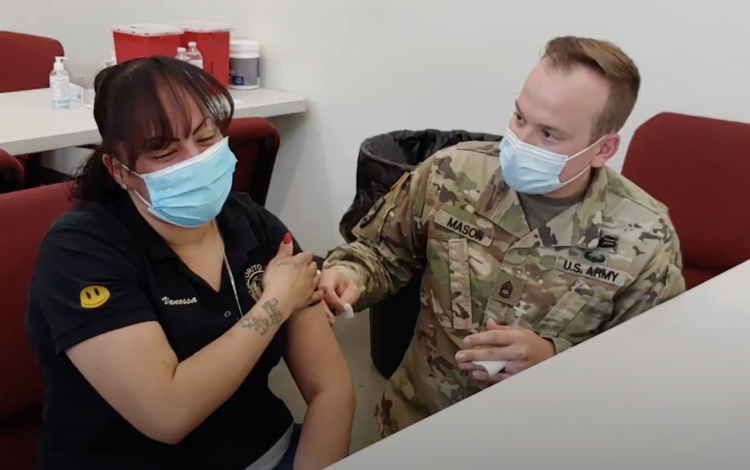 The mission was scattered at first, said Medic Mitch Mason, a welder from Savannah, particularly that first day when the original eight sat a bit out of sorts at that lunch “that Eslinger and I paid for.”

They worked a series of community sites as initial vaccine supplies came on board, until a night-time phone call set their course to 27th and Prospect.

“It was zero-dark-thirty,” Rich said. He was being assigned to head urban-focused operations in both Kansas City and St. Louis, and word from the governor’s office was that he needed to “call Pastor Miles.”

The Rev. John Modest Miles of Morning Star Missionary Baptist Church had just worked with the city to host a temporary vaccination clinic with Truman Medical Centers at the church’s Youth and Family Life Center. Now he saw an opportunity to work with the Local Investment Commission (LINC), a nonprofit citizen-driven collaborative, to support a permanent operation.

Right from that first call with Pastor Miles, Rich said, he knew the work ahead would be special — an experience that, in the end, he would call his most rewarding in 14 years with the Guard.

The team launched the operation at Morning Star in early February when vaccinations were still available only to people over 65 and people with special health risks. Within days, outreach by the church, LINC and the Guard was bringing in larger crowds, and soon, as more people were allowed to get vaccinated, the numbers went up to 300 to 500 a day.

The Guard dispatched more personnel to the site, peaking at 27, and the Kansas City Fire Department sent paramedics to further build the capacity. The Church of Scientology sent volunteers to tend to customers in the post-vaccination waiting rooms.

Mason remembers a day in March when more than 700 residents came through for vaccines. He was required to file several daily reports and was late that day. A text from command asked about the delay.

“I took a picture with my phone,” Mason said, sending it back by text so they could see the crowd, with a simple message: “Busy.”

Mason, a welder who’s also in business school, missed his wife and two boys, aged 8 and 4, back in Savannah, some 70 miles away. He could grab an occasional trip home during the week but spent weeknights in a hotel, usually going home only on weekends.

But this was an important mission “right in my backyard,” he said.

“What makes me proud of the work we do is just seeing the relief on people’s faces when they get their vaccine,” he said, “and being able to talk to people and hearing their stories and hear them say, ‘I get to go see my grandma’ … because I got the vaccine.”

Many times they helped nervous customers find confidence to get vaccinated, and to take that reassurance home to others. By late May, the Morning Star operation had delivered more than 22,000 vaccinations.

On the Road Again

A staffer at the Guinotte Manor housing community recognized Specialist Crystal Baddoo from her days when she was a property manager with the Kansas City Housing Authority and gave her a hearty greeting — though now she was dressed in camouflage.

“When did you join the Army?”

Baddoo, a property manager, is one of the National Guard vaccination team members who live in Kansas City, so her work out of Morning Star often meant serving family, friends and neighbors.

When the Guard began expanding its work, sending vaccination teams from Morning Star to housing communities, businesses and community centers, she began setting up trips to her familiar Kansas City Housing Authority sites to connect with more of the hard-to-reach households. 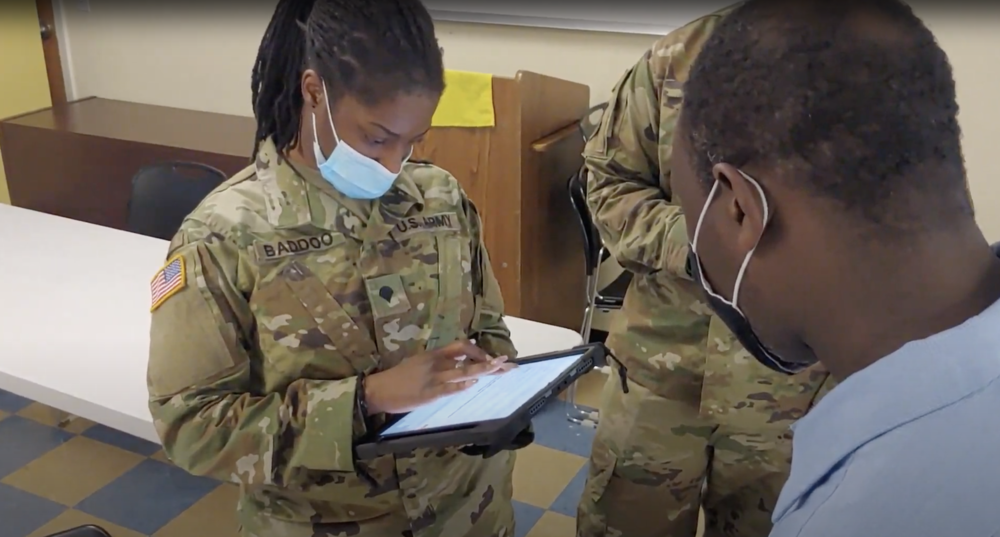 “This has been a great experience for me, and one of the reasons is because this is my home,” Baddoo said. “Being able to vaccinate people in my community has been one of the greatest accomplishments I have been a part of … doing good, one person at a time.”

It’s been a bit of fun, she said, when some friends “see me in uniform for the first time.”

This was the Guard’s Morning Star Outbound team’s mission, to go to homebound residents and to seek out deeper pockets of the city, bringing convenience to people like maintenance worker Cyjuan Anderson who got a Johnson & Johnson vaccination at Guinotte on May 24.

Anderson had strung up the specially made banner that morning outside the housing community’s main office building to promote the visiting vaccine operation. It was time, he decided, to get past his reluctance.

“It’s here. They’re giving it out,” he said “It will give me a clear conscience.” 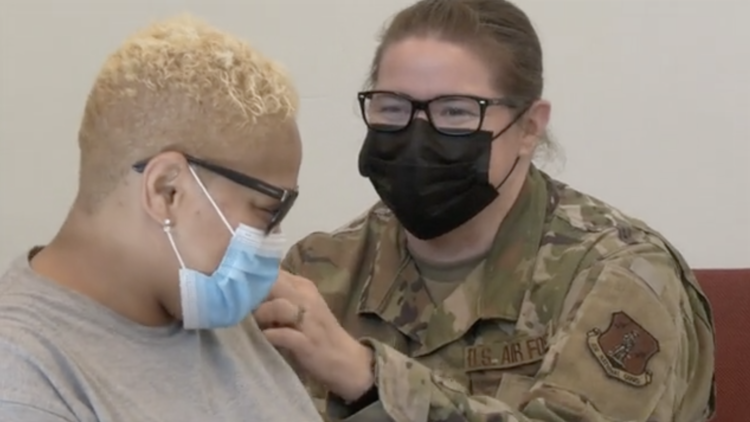 One of the homebound calls came from a woman whose frail mother was in her late 80s. Technical Sgt. Medic Carrie Neville made the house call with the Kansas City Fire Department and soon found out from the daughter that the woman before them had survived the Holocaust when as a young girl her family was forced out of Poland into a German concentration camp.

Neville is an emergency medical technician from Columbia, wife and mother of three children between 15 and 20 years old. It’s a lot to leave behind, “but I haven’t regretted it,” she said. She’ll always remember the Holocaust survivor, who had survived the worst of the world’s terror, and now COVID too.

It was 2006 when Eslinger answered the call to go to Iraq, imagining he’d engage in tense but fulfilling work, only to spend the year in safe offices while he knew, because of a medic shortage, that some convoys were rolling across dangerous terrain without proper medical support.

So he volunteered for a second year, joining an infantry unit, taking the medic’s seat on military vehicles, thinking that service under the threat of bombs and sniper fire would define his Guard career.

But it was here, home in Missouri, that it happened most of all.

“Pretty nice feeling,” he said, “doing more for the community,” a feeling he said hit him “right off the bat.” Preserving good health, even lives, “here, for civilians, alongside civilians.”

On May 13, Col. Mike Belardo, the Guard’s statewide task force commander, came to visit the Kansas City clinic, to recognize the work of the team, hand out coin medals and reflect on their mission.

“I’m a big believer in leadership through servanthood,” he said. “You made it work, (connecting with) homebound, refugees, non-English speakers — all the populations we were trying to reach.”

After the ceremony, he spoke of the collaboration with the church, with LINC, with the neighborhood and a rippling wave of good.

“This is so much more than vaccinations,” he said. “This is community building. This small drop of water that is Morning Star will go through this community for years.”

May 13 was also Capt. Rich’s last day of service. He was originally scheduled to end his duty in March but extended his time by two months to help carry on the clinic’s mission.

He said goodbye to this team of “so many different personalities.” In the five months (now going on six) since they’ve been “on orders,” they shared news of family weddings, promotions, pet adoptions, birthdays and “all sorts of life events,” Rich said.

And then there are the relationships with their community partners, “forged and built here . . . that I hope will continue for a lifetime.”

In ceremony, they sent Rich off with a final salute, but they were just as well saluting each other and themselves and the thousands who came through the clinic baring their arms to join this unifying, unforgettable mission. 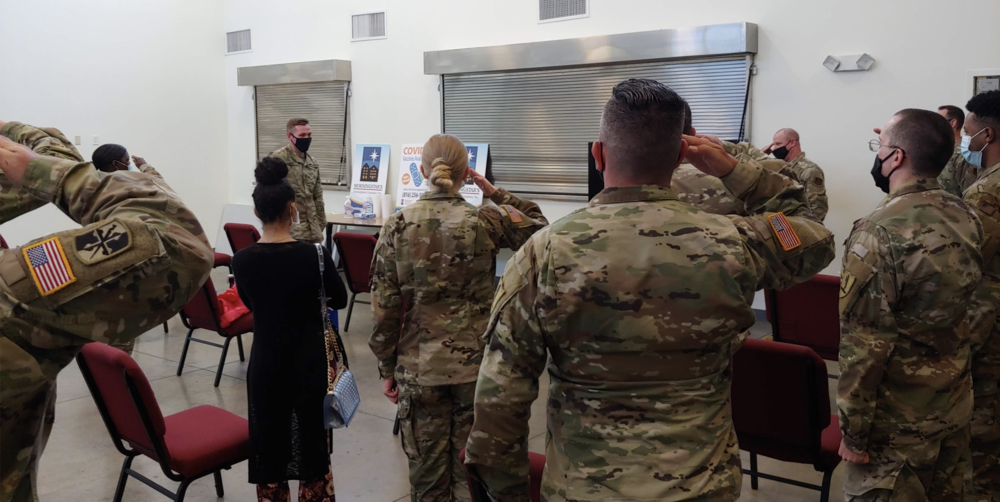 Members of the Missouri Air and Army National Guard salute Capt. Tony Rich at the Morning Star/LINC vaccination clinic on his last day of service with the Guard, May 13. Rich had extended his service by two months to remain on the vaccination mission. (Courtesy | Local Investment Commission)

This story first appeared on the website of the Local Investment Commission (LINC), a nonprofit organization that works with state and local government, businesses, community and civic leaders to improve the lives of children and families in the Kansas City region. Joe Robertson is a LINC writer.

Power Kansas City journalists to tell stories you love, about the community you love. Donate to Flatland.

In a since-deleted tweet responding to a question about a potential contract extension for Kansas City Chiefs safety Tyrann Mathieu, Mathieu tweeted that he's "probably not" going to get a new deal in … END_OF_DOCUMENT_TOKEN_TO_BE_REPLACED

When the Kansas City Chiefs selected former Tennessee offensive lineman Trey Smith in the sixth-round, the pick was immediately labeled one of the biggest steals of the draft — and rightfully so. The … END_OF_DOCUMENT_TOKEN_TO_BE_REPLACED

KANSAS CITY, Mo. — A manhole left uncovered is the source of concern after a woman damaged her car in Kansas City. The single-car crash happened at 11th Street and Tracy Avenue during the busy … END_OF_DOCUMENT_TOKEN_TO_BE_REPLACED

Kansas City, Missouri's COVID-19 emergency order was set to expire at the end of the month. But Mayor Quinton Lucas made it clear Friday that private businesses can still set their own rules.Any … END_OF_DOCUMENT_TOKEN_TO_BE_REPLACED