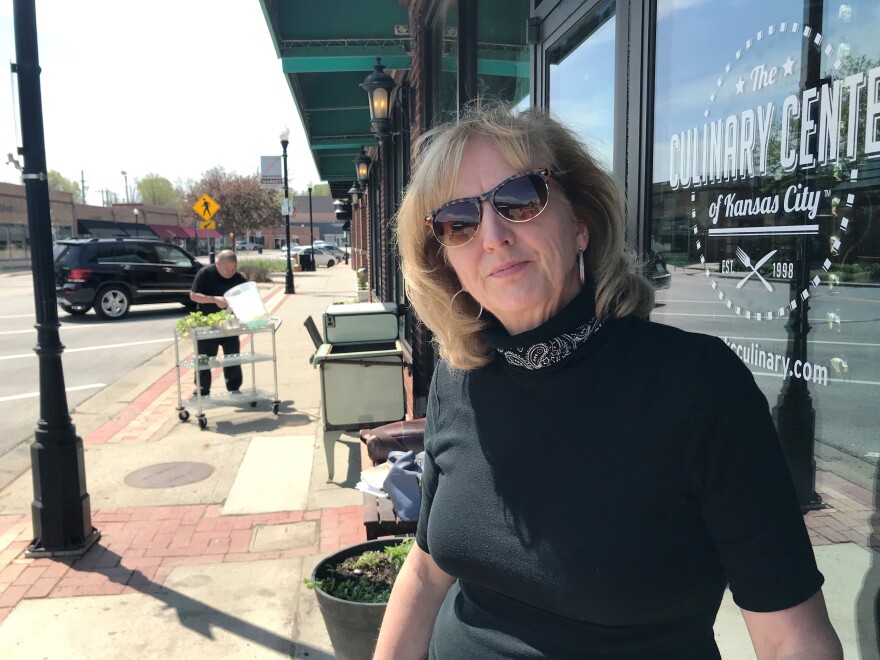 Statewide stay-at-home orders in Kansas and Missouri, set in place to curb the spread of COVID-19, are set to expire on May 3. That means many business owners are preparing to welcome customers for the first time in almost two months.

But cities and counties are still allowed to impose stricter rules about who can open and when, so conflicting guidelines are at play throughout the metro region. Kansas City, Missouri’s order remains in place through May 15, but some surrounding counties have decided to ease restrictions on May 3.

All of which has led to mixed feelings throughout the metro.

Confusing directions for how and when to reopen keep Laura Laiben awake at night. She owns the Culinary Center of Kansas City, which is located in Overland Park, Kansas.

Will people feel comfortable coming to a cooking class? Once they do re-open, how can she best protect her thirty employees? And what about the events they’re planning to cater at the end of May?

Since they closed in mid-March, Laiben said, some of their online courses have been popular.

“We recently hosted an online macaron making class that was gangbusters,” she said. “Our plans change daily, as it does with everybody else. But as of today, we are going to have our first on site class resume on May 16.”

She added that classes will likely be “demo only,” instead of their usual hands-on approach.

Cara Beck, who manages The Missouri Mud Company in Raymore, is also rethinking how they’ll do business once they open on Monday.

“We’ll have seating maybe at every other booth, and just let people sit on the patio, but I don’t think there will be a lot of people running in to do it,” she said.

The deli has been a part of Beck’s life for a long time. Owned by her mother, “The Mud,” as it’s called by locals, will celebrate its 21st birthday in October.

“I’m ready for people again. I miss the customers and having a line to the door,” Beck said.

The dress shop focuses mostly on dresses and decorations for weddings and quinceañeras, and while she plans to open her dress shop on Monday, she doesn’t expect it will help recover much lost business.

Medina typically packs most of her annual sales into the months between March and August, when most quinceañeras are held.

But Moda Bella has been closed for about 40 days. And many celebrations are either canceled or delayed until sometime after the pandemic.

“We’ve had no business all year,” Medina said. “It’s not enough to pay the bills.”

Government loans for small businesses have helped her stay afloat, she said. She also hopes to salvage some business from people ordering dresses for next year.

“We have to continue to have faith in the Mexican people,” she said. “Because we make a lot of celebrations!”

“I heard that (Wyandotte County) will allow us to open to customers next Monday,” she said. “But I decided to wait two or three weeks.”

Saenz is worried about the safety of her customers — with room for only a handful of dine-in tables, it would be nearly impossible to maintain social distancing in her current space.

Similarly, Amy Abbiatti is still trying to figure out when to open the Manor Thrift Shop she manages in Liberty, Missouri. Her store relies on volunteers, many of which are older, so she’s hesitant to open Monday.

“They are like family. A lot of them have been here since the store opened back in 1982,” Abbiatti said. “So that’s my biggest consideration. What am I bringing into the store that would not be good for them?”

Abbiatti said she’s looking at the guidelines for the county and wants to talk to her local Chamber of Commerce before making the call.

“As much as we want to get back on our feet and ready to go, we want to do it safely for everyone involved,” Abbiatti said.

The store could open as early as next Tuesday, or closer to the middle of May, when nearby Kansas City’s stay-at-home order ends, but Abbiatti stressed that it’s still up in the air.

In the meantime, she’s been checking in with her volunteers to see what they are comfortable with.

“I’ll just wait and see who I get back and who I don’t, and I won’t blame anybody for any of this because it’s way uncharted territory,” Abbiatti said. “We don’t know.”

Wondering which stay-at-home ordinance applies to you? We created a guide to the complicated orders from states, counties, and cities.

In a since-deleted tweet responding to a question about a potential contract extension for Kansas City Chiefs safety Tyrann Mathieu, Mathieu tweeted that he's "probably not" going to get a new deal in … END_OF_DOCUMENT_TOKEN_TO_BE_REPLACED

KANSAS CITY, Mo. — A manhole left uncovered is the source of concern after a woman damaged her car in Kansas City. The single-car crash happened at 11th Street and Tracy Avenue during the busy … END_OF_DOCUMENT_TOKEN_TO_BE_REPLACED

Kansas City, Missouri's COVID-19 emergency order was set to expire at the end of the month. But Mayor Quinton Lucas made it clear Friday that private businesses can still set their own rules.Any … END_OF_DOCUMENT_TOKEN_TO_BE_REPLACED

KANSAS CITY, MO (KCTV/AP) — All restrictions meant to slow the spread of the coronavirus were being rescinded as of midday Friday in Kansas City, Missouri, following guidance from the U.S. Centers for … END_OF_DOCUMENT_TOKEN_TO_BE_REPLACED