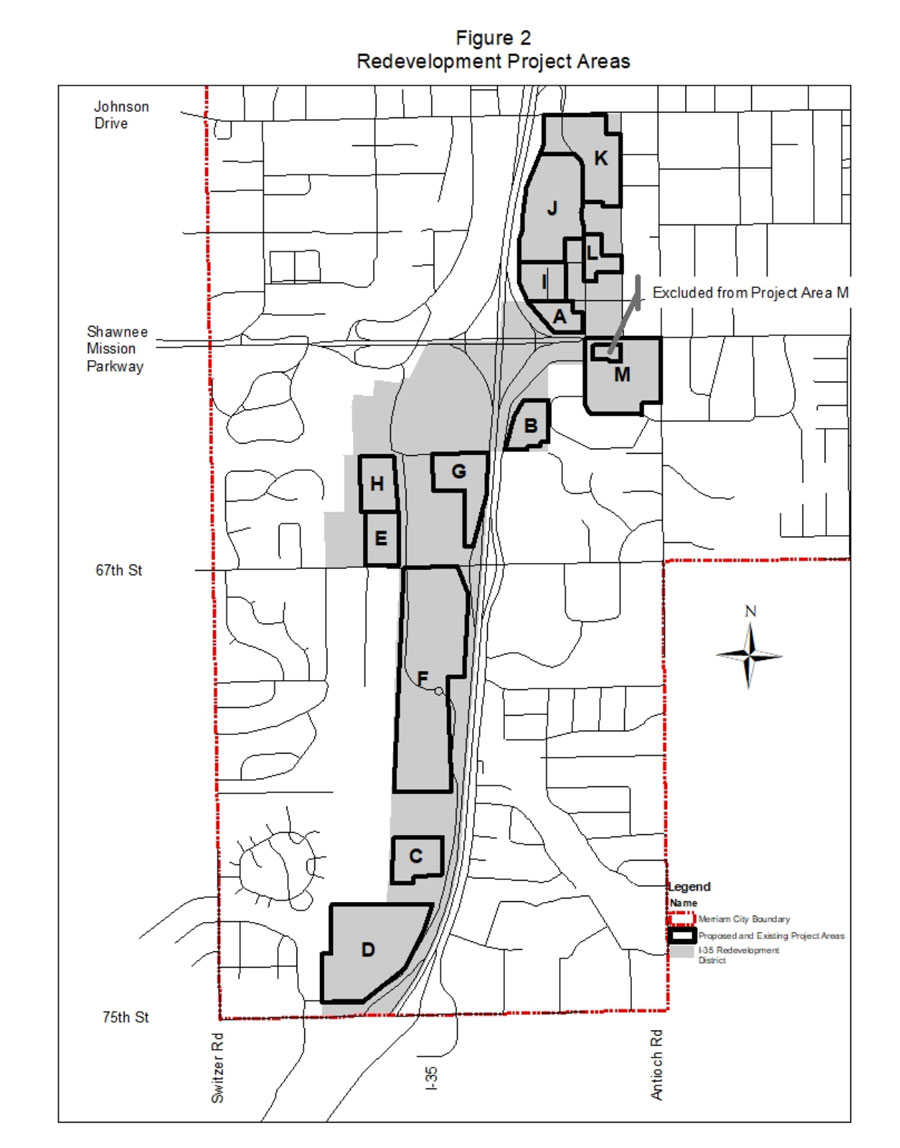 The former Kmart site has been vacant for nearly 10 years, and has significantly deteriorated over that time. Above, the interior of the Kmart. Photo via city of Merriam documents.

Since Kmart closed in January 2013, the vacant site has deteriorated significantly — including the roof, the facade and finishes like the now inoperable doors, according to city documents.

Over the past decade, multiple redevelopment plans for the site have fallen through, including a plan for a Menards hardware store and a subsequent project put together by Block and Co.

Mayor Ken Sissom said the public hearing and formal consideration of the expansion was an important part of the city council meeting, as it could make way for a new redevelopment plan on the site.

The I-35 TIF district in Merriam now includes the site of the former Kmart on Shawnee Mission Parkway at Antioch Road, labeled “M” on the map above. Image via Merriam City Council documents.

“We’re thinking about amending a TIF district’s boundaries to allow for the development of the Kmart site, which has sat vacant, and I would say blighted, for maybe eight or 10 years,” Sissom said. “As a city, we’re trying to make this site a little more attractive to potential developers, and I think it’s an important thing for us to consider.” 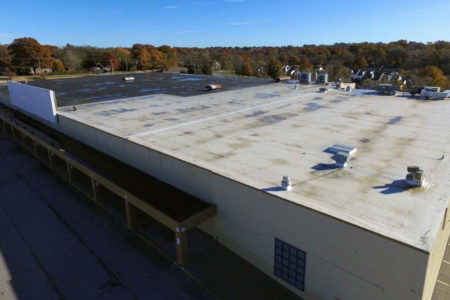 The roof at the former Kmart site is also deteriorating, with spots that leak and other failing parts. Photo via city of Merriam documents.

The last time the city council amended the I-35 TIF District was to include project “L,” which was for the development of the parking structure for the Merriam Community Center and what will be the relocated Antioch library branch next door.

With the approval of the TIF district expansion, Community Development Director Bryan Dyer said the following are the next potential steps:

Still, the TIF district expansion doesn’t mean the city will be required to approve a TIF deal specifically for Drake.

Dyer assured the city council that as a result of the site’s poor state — from the topographical issues to the substantial grading issues — any developer will likely request public financing.

“Whether it’s Drake [Development] or a different developer that wants to redevelop this site, it’s going to take a public-private partnership,” Dyer said.

Dyer said a tax increment financing application will be submitted by the developer soon, if it hasn’t already been submitted.

After the public hearing Monday, the city council unanimously waived the first reading of the ordinance and unanimously approved the expansion.

In a since-deleted tweet responding to a question about a potential contract extension for Kansas City Chiefs safety Tyrann Mathieu, Mathieu tweeted that he's "probably not" going to get a new deal in … END_OF_DOCUMENT_TOKEN_TO_BE_REPLACED

KANSAS CITY, Mo. — A manhole left uncovered is the source of concern after a woman damaged her car in Kansas City. The single-car crash happened at 11th Street and Tracy Avenue during the busy … END_OF_DOCUMENT_TOKEN_TO_BE_REPLACED

Kansas City, Missouri's COVID-19 emergency order was set to expire at the end of the month. But Mayor Quinton Lucas made it clear Friday that private businesses can still set their own rules.Any … END_OF_DOCUMENT_TOKEN_TO_BE_REPLACED

KANSAS CITY, MO (KCTV/AP) — All restrictions meant to slow the spread of the coronavirus were being rescinded as of midday Friday in Kansas City, Missouri, following guidance from the U.S. Centers for … END_OF_DOCUMENT_TOKEN_TO_BE_REPLACED