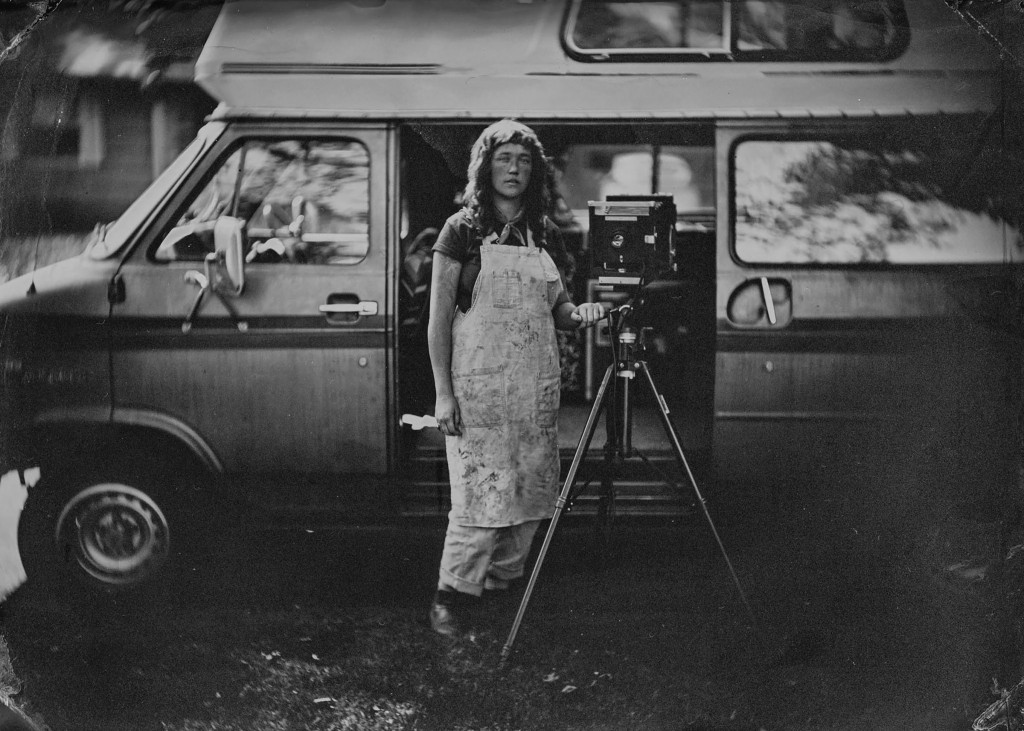 The artist and her van. // Photo by Leilani Thornton Tuttle

With an old camera of boxes and bellows, silver nitrate that stains, and cyanide that poisons, Megan Karson is making photographs. As a tintypist, Karson travels (pre-pandemic, and hopefully, after) in her van to shoot landscapes and portraits using two-hundred year old techniques. The resulting images are intimate and other-worldly.

Compared to film photography, Karson enjoys the hands-on, traditional process of making tintypes. If these old techniques aren’t practiced and taught, they could be lost.

“It’s important to me to preserve the past,” Karson says, “and that’s a big part of my work. My goal with my work is to combine preserving stories from now with preserving a process from two hundred years ago.”

Getting into making tintypes is not for the faint of heart. “I spent like two or three months collecting my gear, because it’s not something you can just buy anywhere. I had to buy a special camera and then I had to modify the camera and do all this research and find all the chemicals and figure out a darkroom that would work that was mobile. So it took quite awhile. It’s a lot of gear and it’s expensive and it’s time consuming. It’s not an ideal process for someone who just wants to make pictures for fun.”

In the wet plate collodion process to make tintypes, she prepares the plates by coating them with an emulsion containing silver nitrate, which is sensitive to light, so when the lens of the camera is opened, the light and shadow create an image on the metal. 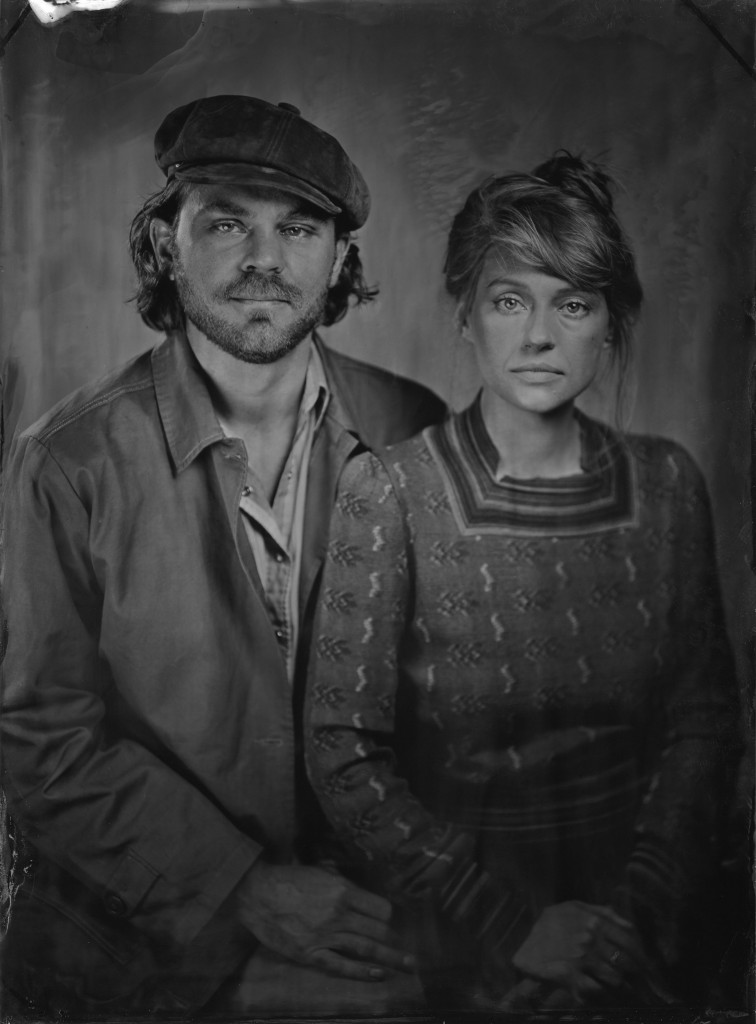 “With wet plate, the actual piece of metal, and the chemicals on them, has to remain wet while you’re taking the photo, and then they have to get back in the chemicals. So you only have a few minutes to do the whole thing.” To function on the go, Karson uses a light-tight portable hydroponics tent as her darkroom.

Once the exposed plate is back in the chemicals, “it develops in about 15 seconds,” says Karson, “and then you put it in a fixer, and that makes it not light-sensitive anymore, and then it’s done. I varnish them and then they’re safe from getting scratched or fading for hundreds of years.” 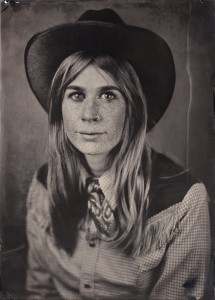 The fixer used in the original tintype process is cyanide. Modern fixers, like the ones used by film photographers in their darkrooms, are far safer, and also work on tintypes. But the end result is different, and Karson prefers the look and authenticity of the original chemical formulas. Cyanide it is. “It’s very dangerous. Which is why I wear a gas mask when I work in my dark room. And it’s actually not very easy to purchase.”

You may have seen Karson’s work when she was creating playful stuffed monsters. That project culminated with a large human-sized monster aboard a streetcar as a part of 2018’s Art in the Loop. Now, she says, “I am retired from sewing.” Her monsters, she says, “just became so much of my public identity, I was the monster lady, and it didn’t feel very expressive to me anymore. I was just manufacturing things instead of making art. So I quit doing that.”

Of all her art forms, which has also included drawing, photography was always her favorite. But, she says, “I never thought I could make money doing it, so it was on the furthest back burner of all my practices.” 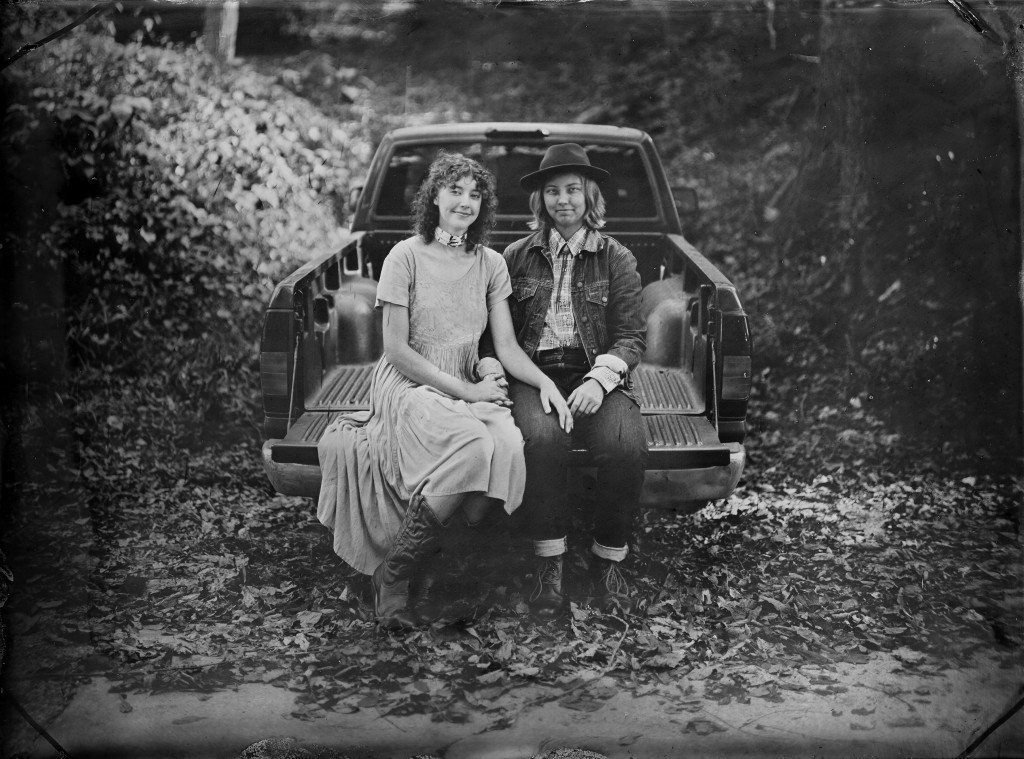 Things changed when her uncle passed away, leaving her some money. “He was an artist,” Karson says, “and he was like, ‘Quit doing shit that you hate. Here’s some means to get by for a while and you can actually make what you want to make and be an artist.’ So I was more able to focus on what I wanted to be doing, instead of just making stuff hoping it would make me money.” That gave her the means to buy her van, go to a tintype workshop in California, get herself the skills and materials to get started. And it paid off. 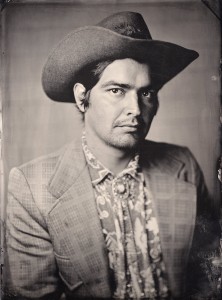 “Luckily, making tintypes, I’ve made more money than I ever did doing the other things I was doing, that I hated doing. I didn’t hate drawing—I loved drawing, but again it was, how can I make this appealing so people want to buy it, instead of just I want to make this thing because it’s important to me. I think that’s a very common thing for artists these days. It’s hard to make money and make what you want. So I feel lucky I can do that now—in pre-COVID days.”

When the pandemic shutdowns began in March, Karson was on her first long trip to travel around and make tintypes. She had to leave the desert a week before all the flowers came into bloom.

“My goal was to go on tour and set up pop-ups [to make portraits]. I could take breaks in between and explore and take landscapes, and then go into a town and meet people and make some money and make photos. I was doing it, before COVID-19.”

She travels in her 1979 Chevy van, that she fitted out for long trips, including a bed, sink, and stove. “I built the van with all this in mind. There’s enough space in there for my darkroom to be set up, but there’s also storage compartments that the dog can’t get into.” (Gotta keep the dog out of the cyanide.) 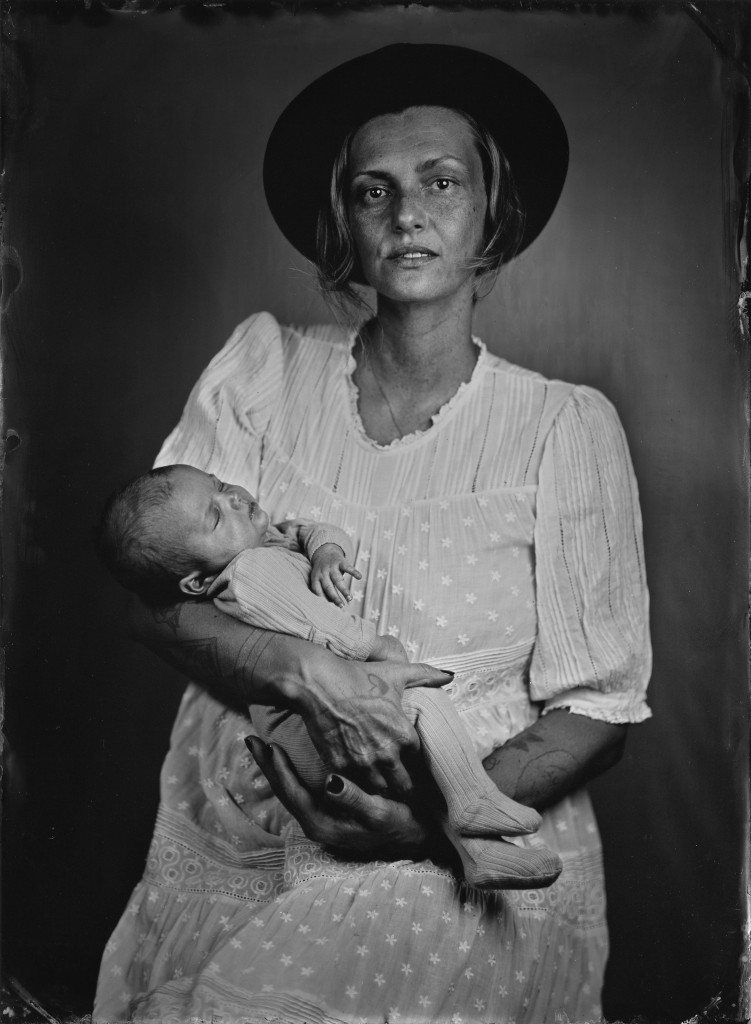 Much like she prefers the old over the new in her photographic process, Karson favors paper maps over GPS. “I don’t usually use GPS when I’m traveling. [Using a paper map] keeps me present. I actually have to pay attention to where I am and what I’m doing.” Of course, her paper map is from the 1960s, so she occasionally finds that roads no longer exist, or have been renamed. But it’s also a map of where she’s been: “I draw on it, all the roads I’ve been on, which is the other reason I carry it with me. It’s like a scavenger hunt to cross off roads.”

As the world shut down in March, Karson headed to hometown Kansas City. She recently learned that she’s a sixth-generation Kansas Citian—“My great-great-great-grandparents lived here in the late 1800s. Which is why I feel so comfortable here, but also just want to go away so badly.” While she’s been grateful to have somewhere safe and familiar to be during this year of uncertainty, she’s itching for the road again. “It’s hard to feel inspired in the place you’ve spent your whole life. For someone who’s very visual and needs visual stimulation, I’m just under stimulated here, because it’s so familiar.” 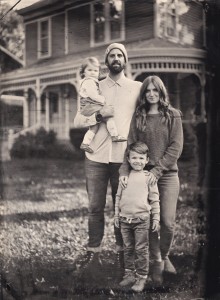 During the pandemic, she’s made some “house call” tintypes, making socially distanced portraits outside people’s homes. When asked what she’s eager to do when it’s safe to travel again, it’s landscapes.

“I love making landscapes with tintypes. It’s really difficult, it’s way harder than making portraits, because I’m out in the wild.” On the other hand, she says, “in some ways it’s easier because I can make ten, and there’s no one sitting there getting irritated. Or I can do a 10 second long exposure and I’m not worried about someone moving.”

While film camera exposures are typically tiny fractions of a second, tintypes may require five or ten seconds. In a studio, she uses lights putting off a total of 10,000 watts. “So it’s an incredible amount of light that’s needed,” she says, “which is why they’re really long exposures outdoors.” 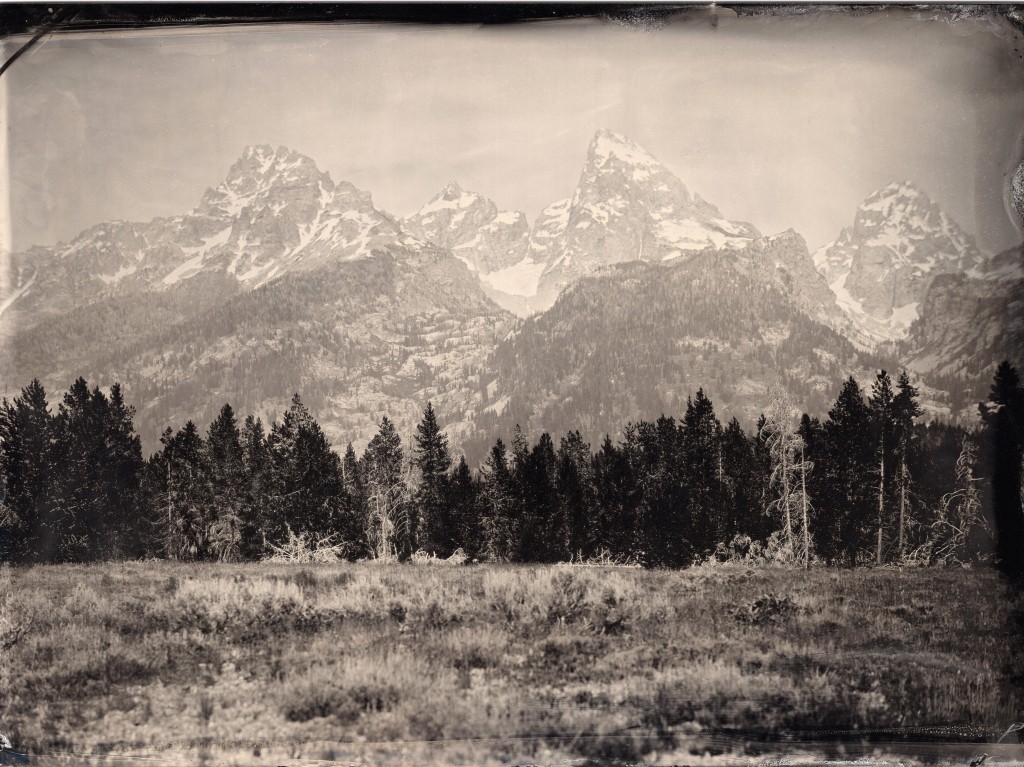 Making portraits comes with the task of managing the subjects’ expectations. A lot of her subjects are understanding or excited about the quirks of the medium. “But some people don’t really understand the whole process. ‘I just want this old timey photo of myself,’ and they don’t actually understand how difficult it is to get that photo, and that there are a lot of things that can go wrong.”

She describes herself as a perfectionist, and with the tintype process, “you kind of have to let go of your expectations. It’s kind of mysterious, which is a cool part of it, but can be frustrating sometimes.”

“There’s a lot of challenges involved in tintype making,” she says. “The chemicals are really sensitive to heat and cold. If it’s 80º it’s too hot, if it’s 50º it’s too cold. And you could poison yourself very easily. And silver nitrate is clear when you’re looking at it, but if it gets on your hand, the next day your hands will be black, it completely stains your skin. There’s nothing really easy about it.”

But she persists, and the mystery and the challenge pays off. Karson says a friend recently observed that with her tintype portraits, it’s like you can see more than just the person, you can see the souls of the people. That there’s an intimacy there. And that intimacy shows up in her landscapes too, something that doesn’t exist in a modern color photo of a cactus or a mountain. “There’s more to it with a tintype,” she says. “It has more feeling to it.” 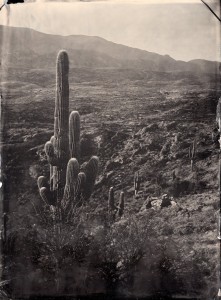 Buy prints on online at megankarson.com

KANSAS CITY, Mo. — The environment, children and smoking are issues Vari Patel and three other teens from the Kansas City metro felt needed attention so people can live healthier lives. "And when … END_OF_DOCUMENT_TOKEN_TO_BE_REPLACED

KANSAS CITY, Mo. — Kansas City, Missouri, Mayor Quinton Lucas confirmed Monday not only that he’d been married earlier this month — but that he and his wife welcomed a baby boy, too. In a post to … END_OF_DOCUMENT_TOKEN_TO_BE_REPLACED

KANSAS CITY, Mo. — Kansas City, Missouri, leaders once again will look into renaming city streets in honor of Dr. Martin Luther King Jr. The city's Board of Parks and Recreation Commissioners will … END_OF_DOCUMENT_TOKEN_TO_BE_REPLACED