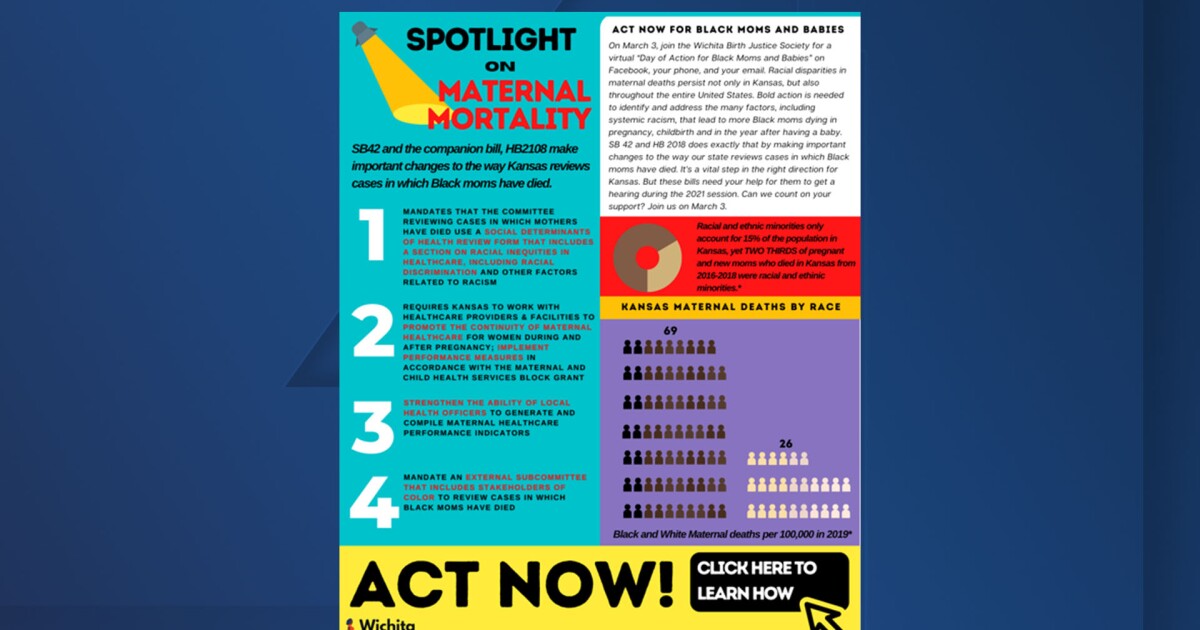 KANSAS CITY, Mo – Even though it’s been eight years, Sapphire Garcia-Lies still remembers the excitement surrounding the birth of their second daughter, Ella.

“Everything went perfectly with my pregnancy and then I had 38 1/2 weeks and I noticed that she didn’t move that much,” said Garcia-Lies.

Garcia-Lies said she visited her doctor and shared her concern only to learn it was normal.

Despite nagging suspicions, she returned home for a second opinion at the hospital two days later.

“They did a sonogram and couldn’t find a heartbeat,” said Garcia-Lies. “She died in the womb and it turned out that she had wound her cord around her neck several times and her blood supply was cut.”

Heartbroken and devastated, she delivered Ella, knowing that there would be no first breath, no first scream.

Holding her stillborn daughter in hand, Garcia-Lies said she wondered if her race caused her doctor to ignore her concerns.

“If they had noticed in time, when she was still moving some, then she could probably have been saved,” said Garcia-Lies.

The same goes for adult black women who are two to three times more likely die in childbirth compared to white women.

It’s a trend That came into the spotlight a few years ago when two celebrities consecutively experienced life-threatening complications.

In 2017, superstar Beyoncé gave birth to twins, and fans later learned that she had to have an emergency caesarean section due to preeclampsia, which can be fatal.

A few months later, tennis star Serena Williams was admitted to emergency surgery after giving birth because she suffered from a pulmonary embolism.

Both mothers are doing well today. However, the same does not apply to around 700 women per year.

While a number of factors go into these statistics, some experts and proponents said Health bias contributes to this.

Racism and Public Health
According to various medical research reports, women with skin color are more likely to be biased in healthcare. Last June, the American Medical Association “Planned measures to combat systemic racism” and five months later announced a new policy Recognizing racism as a threat to public health.

Some experts said this was from the 19th century when James Sims, often referred to as the father of OBGYN, performed experimental surgeries on enslaved women without anesthesia.

“Historically, this has resulted in a tendency that black women can endure more pain, that they are stronger,” said Dr. Sharla Smith, Assistant Professor in the University of Kansas Medical School.

Smith showcases this topic to local medical providers and shares the stories to show doctors, nurses, and medical students how women feel that their skin color concerns have not been taken seriously.

“There’s this misconception that if you’re black or from a certain community you’re not educated,” Smith said. “You don’t have health insurance. You don’t have a job. So you don’t have the knowledge to really take care of yourself.”

Kansas City mother Izula Maximillen was one of the staunch prejudices that prevented hospital staff from taking her seriously when she went to the emergency room.

At the time, she suspected that her severe pain was the result of another ectopic pregnancy.

“When I spoke to the admissions officer, I told him I was pregnant [and] that I had ectopic pregnancies in the past and I currently have one and he told me to go out to eat and sit down, “said Maximillen.

At the time, Maximillen said, she had received no major diagnoses that day other than a drug test. She waited almost five hours – floating in consciousness – until the blood count came back and showed that she had sepsis.

Only then did the hospital perform an ultrasound.

“And now they wanted to do an ultrasound and find out what was going on,” said Maximillen, “and when they did the ultrasound, they were able to confirm that there was an outbreak in my fallopian tube.”

She had lost half of her blood supply due to internal bleeding and was operated on immediately, but not before she said goodbye to her young son for the first time.

“I remember he said that he loved me and I told him that I had left him and was worried that it would be the last time I saw him,” said Maximillen.

After the operation, she recalls how she deliberately opened her eyes and vowed to share her story so that no other woman of color would experience the trauma she suffered.

ADDRESSING RACIAL BIAS IN WOMEN’S HEALTH CARE
The Maximillen and Garcia-Lies stories are just a few shared with doctors in Missouri and Kansas. And they caught the attention of the American College of Obstetricians and Gynecologists (ACOG).

“What I would say to these people who share their stories is that I believe you, and that ACOG believes this is a problem within our own practice and the larger system of health care and wellbeing“Said Dr. Colleen McNicholas, a St. Louis OBGYN and ACOG Fellow.

McNicholas said that ACOG already has a long history of working on the subject, including clinical and Advocacy work.

“That’s all of us clinical guidance to OBGYNs to laws that we have endorsed, including the Black Maternal Health Momnibus and HR 4995 and 4996“Said McNicholas.

While ACOG has taken formal steps to address racial inequalities due to racism and bias in their field, McNicholas said More needs to be done on a larger scale.

RELATED: Why the AMA is committed to a diverse workforce of medical professionals

This is where Uzazi Village comes in. The Kansas City, Missouri nonprofit is helping fill the gaps for black and brown women, free of charge.

“We are trying to reverse these trends in health outcomes and help our families in the community have healthier pregnancies and healthier babies,” said Hakima Payne, founder of Uzazi Village.

“Doula is a professional job support person or professional job coach,” Payne said. “Apart from the fact that our doulas are also trained to work with women during pregnancy and in the postpartum period.”

These women can act as advocates for women of color to ensure their voices are heard by medical providers. For Garcia-Lies, it’s a service she knows well.

She became a doula after losing her baby Ella to better advocate for women of color and their babies.

“I’ve seen clear cases where working as a doula has paid off with better results for the mother or baby,” said Garcia-Lies.

It is a struggle to help others that will keep them motivated and keep Ella’s memory alive.

For more information on maternal and child mortality and inequality, see below:

In a since-deleted tweet responding to a question about a potential contract extension for Kansas City Chiefs safety Tyrann Mathieu, Mathieu tweeted that he's "probably not" going to get a new deal in … END_OF_DOCUMENT_TOKEN_TO_BE_REPLACED

KANSAS CITY, Mo. — A manhole left uncovered is the source of concern after a woman damaged her car in Kansas City. The single-car crash happened at 11th Street and Tracy Avenue during the busy … END_OF_DOCUMENT_TOKEN_TO_BE_REPLACED

Kansas City, Missouri's COVID-19 emergency order was set to expire at the end of the month. But Mayor Quinton Lucas made it clear Friday that private businesses can still set their own rules.Any … END_OF_DOCUMENT_TOKEN_TO_BE_REPLACED

KANSAS CITY, MO (KCTV/AP) — All restrictions meant to slow the spread of the coronavirus were being rescinded as of midday Friday in Kansas City, Missouri, following guidance from the U.S. Centers for … END_OF_DOCUMENT_TOKEN_TO_BE_REPLACED