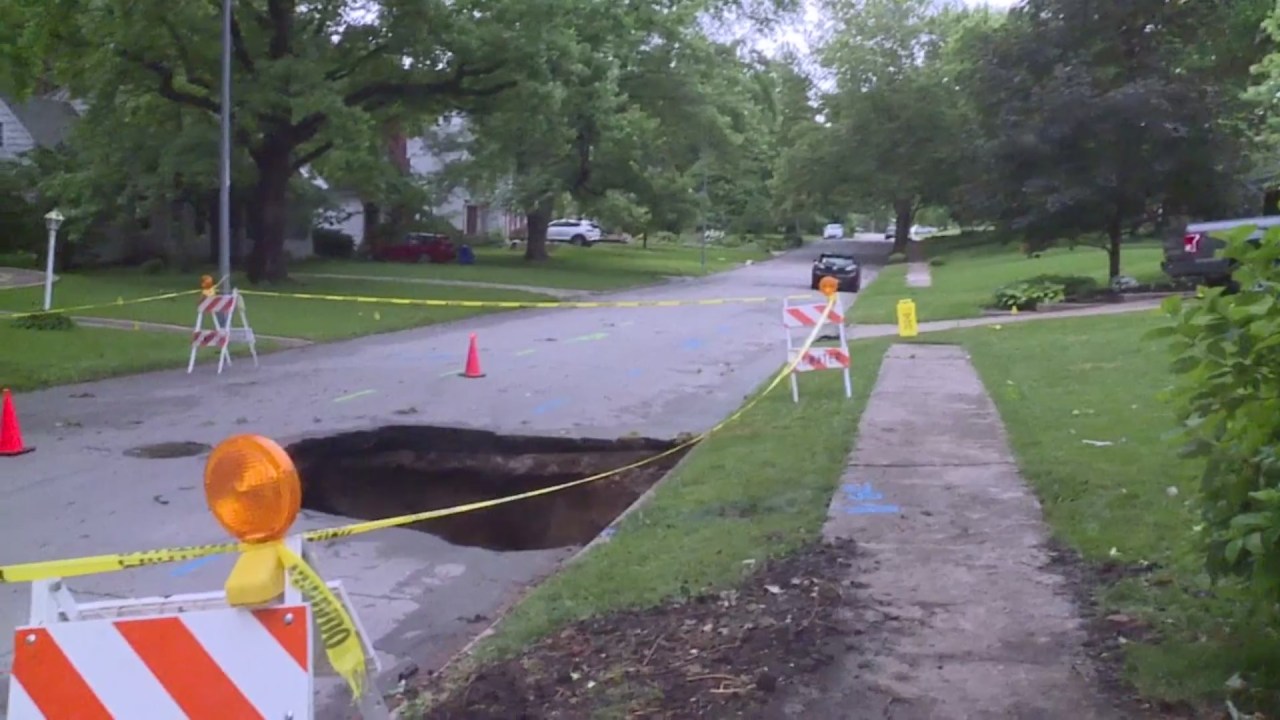 Witnesses say it’s been growing bigger and bigger by the hour. Kansas City Water crews were on scene Friday night at 70th and Cherry streets, trying to secure the scene.

Officials say a nearby water main break caused the problem.

Michael Dix had parked his car in the very spot where that sinkhole opened up. He’s grateful he moved it before disaster hit this KC street.

“I’m glad I move my car, and it’s a small car. It would’ve fit in there just nicely,” he said.

This gaping sinkhole started opening up at about 3 p.m. Friday. Dix had a front row seat from his property line.

“I looked over, and there was a hole about half this width,” he said. “And over the course of the last five or six hours, it’s just grown and grown and grown.”

A contractor dropped off some large steel plates to cover the hole earlier Friday evening as the spectacle became a neighborhood curiosity.

“This is wild, not something you see in the city every day, that’s for sure. It’s pretty cool,” neighbor Erica Ketchem said.

Although the road might be passable in the next day or so, the water supply to people on this portion of 70th Street might be out for a while.

“A few days or weeks without a shower might be a little bit testy,” Dix said. “My wife and I will sleep in separate bedrooms probably.”

In a since-deleted tweet responding to a question about a potential contract extension for Kansas City Chiefs safety Tyrann Mathieu, Mathieu tweeted that he's "probably not" going to get a new deal in … END_OF_DOCUMENT_TOKEN_TO_BE_REPLACED

KANSAS CITY, Mo. — A manhole left uncovered is the source of concern after a woman damaged her car in Kansas City. The single-car crash happened at 11th Street and Tracy Avenue during the busy … END_OF_DOCUMENT_TOKEN_TO_BE_REPLACED

Kansas City, Missouri's COVID-19 emergency order was set to expire at the end of the month. But Mayor Quinton Lucas made it clear Friday that private businesses can still set their own rules.Any … END_OF_DOCUMENT_TOKEN_TO_BE_REPLACED

KANSAS CITY, MO (KCTV/AP) — All restrictions meant to slow the spread of the coronavirus were being rescinded as of midday Friday in Kansas City, Missouri, following guidance from the U.S. Centers for … END_OF_DOCUMENT_TOKEN_TO_BE_REPLACED