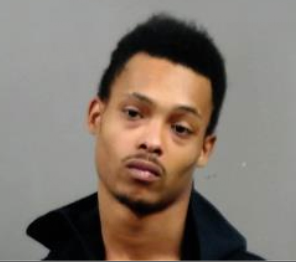 Watley-Jones from a previous arrest in Sedgwick Co.

RENO COUNTY— A Kansas City man who was part of a shooting that injured two people near the Hutchinson Walmart will spend a little more than a year in prison.

Deante Watley-Jones, 22,  pleaded to two counts of aggravated assault in the shooting of Darin Rodriguez Nov. 9, 2019, during a confrontation between occupants of two vehicles.

Watley-Jones could have received a much longer sentence, but the state and defense agreed to the plea on a less-severe charge. The defense asked for probation in the case, but Judge Joe McCarville noted that he could not find enough reason to support the defendant’s claim of self-defense.

According to police, the argument started near the intersection of Ring Road and 17th Avenue. When Rodriguez got out of the vehicle, he was allegedly shot by Jones, who was sitting in the back seat of the vehicle. The bullet then went through the open door of the victim’s car, ricocheted off the interior, and grazed the driver of the suspect’s car, 74-year-old Paula Thomas.

In a since-deleted tweet responding to a question about a potential contract extension for Kansas City Chiefs safety Tyrann Mathieu, Mathieu tweeted that he's "probably not" going to get a new deal in … END_OF_DOCUMENT_TOKEN_TO_BE_REPLACED

KANSAS CITY, Mo. — A manhole left uncovered is the source of concern after a woman damaged her car in Kansas City. The single-car crash happened at 11th Street and Tracy Avenue during the busy … END_OF_DOCUMENT_TOKEN_TO_BE_REPLACED

Kansas City, Missouri's COVID-19 emergency order was set to expire at the end of the month. But Mayor Quinton Lucas made it clear Friday that private businesses can still set their own rules.Any … END_OF_DOCUMENT_TOKEN_TO_BE_REPLACED

KANSAS CITY, MO (KCTV/AP) — All restrictions meant to slow the spread of the coronavirus were being rescinded as of midday Friday in Kansas City, Missouri, following guidance from the U.S. Centers for … END_OF_DOCUMENT_TOKEN_TO_BE_REPLACED