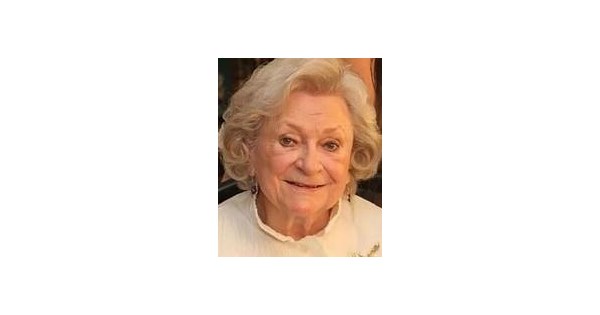 Loretta Dumovich Riss
September 28, 1930 – November 1, 2020
Kansas City, Missouri – Loretta Dumovich Riss of Kansas City, Missouri, passed away November 1, 2020, at the University of Kansas Hospital. She was 90.
Loretta was born September 28, 1930, on Strawberry Hill in Kansas City, Kansas, the youngest of ten children born to Franca “Frances” (Horvat) and Mijo “Michael” Dumovich. Loretta was married to the late Robert Bailey “Bob” Riss. She graduated from St. John the Baptist Catholic School and Bishop Ward High School. She then joined Riss & Company, where she moved through the ranks and, over time, assumed many roles with affiliated companies throughout her career, including: Corporation Secretary and Director of Riss International Corporation; Corporation Secretary and Director of Riss Intermodal Corporation; Corporation Secretary and Director of World Leasing Corporation; Vice-President and Director of Republic Industries; Corporation Secretary and Director of Commercial Equipment Company Inc.; Vice President and Corporation Secretary of Commonwealth General Insurance Company; Vice President and Corporation Secretary of Heart of America Fire & Casualty Company; Director of Grandview Bank; President and Director of Columbia Properties, Inc.
In her role as President of Columbia Properties, Loretta bought, sold and leased trucking terminals and office buildings all over the country. She was a founding member of Terminal Properties Exchange, a member of the Kansas City Real Estate Board, and a member of the Building Owners and Managers Association of Kansas City.
Loretta loved Kansas City. She and Bob were members of Our Lady of Sorrows Catholic Church, where Loretta was an active volunteer. Loretta lived in San Francisco Tower in Crown Center for 45 years, serving on the Board and as President of the condominium association. Loretta was a loyal customer of many Kansas City restaurants, enjoying her weekly outings with family and friends. Each one had her famous martini ready upon arrival.
She was also a steadfast fan of her sports teams, never missing a KU basketball game and avidly watching the Royals and Chiefs. She was delighted to participate in their winning parades as champions from her balcony at home with family.
Loretta’s family was very important to her. Loretta’s mother lived with her until her mother passed away, and Loretta was close to all of her brothers and sisters. Loretta, and later Bob and Loretta, hosted a family party on Christmas night each year.
Loretta liked to travel, frequently taking nieces and nephews with her on her trips. After they married, Bob and Loretta traveled the world, often taking grandchildren and great nieces and nephews with them. She loved her home in Colorado Springs and her trips with Bob each fall to Vermont.
Loretta was preceded in death by her parents and her husband, her sisters, Ann Martinac, Mary Hoytal, Margaret Standish, Rose Koska, Helen Dalton, Catherine Wilkins, and Bernice Bukovac, and her brothers, Michael Dumovich and George Dumovich. She is survived by her stepson, Edward S. Riss and wife, Jan, of Mission Hills, Kansas; three step-daughters, Leslie Riss Raemdonck and husband, Dirk, Breckenridge, Colorado; Laura Riss Stanford and husband, Tad, Los Gatos, California; and Julie Riss Jurden and husband, Len, Prairie Village, Kansas; and her ten step-grandchildren and 14 step-great grandchildren who adored her. Regardless of age, they loved hearing her tales of being a Rockette and the Princess of Croatia. Always a thoughtful and generous aunt, Loretta is also survived by her many loving nieces, nephews, and great nieces and nephews, all of whom hold her dearly in their hearts with special memories of their times with her.
There will be a funeral Mass on September 18, 2021, at 10:00 a.m. at Our Lady of Sorrow Catholic Church, 2552 Gillham Road, Kansas City, MO 64108. Donations in honor of Loretta may be made to Our Lady of Sorrows Church – by mail or at www.oloskc.org – or to benefit neuroscience nursing care at The University of Kansas Health System, with donations made payable to The University of Kansas Health System and mailed to Fund Development, The University of Kansas Health System, 2330 Shawnee Mission Parkway, Suite 305, Westwood, KS 66205, or made online at: https://www.kansashealthsystem.com/giving/donate.

In a since-deleted tweet responding to a question about a potential contract extension for Kansas City Chiefs safety Tyrann Mathieu, Mathieu tweeted that he's "probably not" going to get a new deal in … END_OF_DOCUMENT_TOKEN_TO_BE_REPLACED

KANSAS CITY, Mo. — A manhole left uncovered is the source of concern after a woman damaged her car in Kansas City. The single-car crash happened at 11th Street and Tracy Avenue during the busy … END_OF_DOCUMENT_TOKEN_TO_BE_REPLACED

Kansas City, Missouri's COVID-19 emergency order was set to expire at the end of the month. But Mayor Quinton Lucas made it clear Friday that private businesses can still set their own rules.Any … END_OF_DOCUMENT_TOKEN_TO_BE_REPLACED

KANSAS CITY, MO (KCTV/AP) — All restrictions meant to slow the spread of the coronavirus were being rescinded as of midday Friday in Kansas City, Missouri, following guidance from the U.S. Centers for … END_OF_DOCUMENT_TOKEN_TO_BE_REPLACED