Not in this pandemic year.

“Usually I’m about 80% staffed by February,” said Hill, Wichita’s aquatics director. “This year, I was about 10% staffed.”

Lifeguarding
took a hit last summer, when the COVID-19 pandemic closed most gyms,
water parks and community pools. High school and college students who
would normally work as guards took the summer off or found other jobs.
Training classes were cancelled. So were junior lifeguard programs for
11- to 14-year-olds.

“That’s our pipeline,” Hill said. “In a lot of ways, we were kind of starting this summer from scratch.”

Wichita is not alone.

But
the pool will open for limited hours — only Tuesdays, Thursdays and
weekends — because there aren’t enough guards to staff it.

Roeland
Park boosted lifeguard pay to $12 an hour, up from $10 an hour. Other
cities offer signing bonuses and other perks or recruit younger teens.

Prairie Village cut back its pool hours this summer because of the shortage. So will the city of Shawnee in Johnson County.

The American Lifeguard Association
says lifeguard shortages are common across the country. The traditional
summer job is more nostalgia than reality because teens and young
adults increasingly look for year-round work.

COVID-related travel
restrictions have limited the number of seasonal college and foreign
exchange students. And overall interest in lifeguarding is declining. 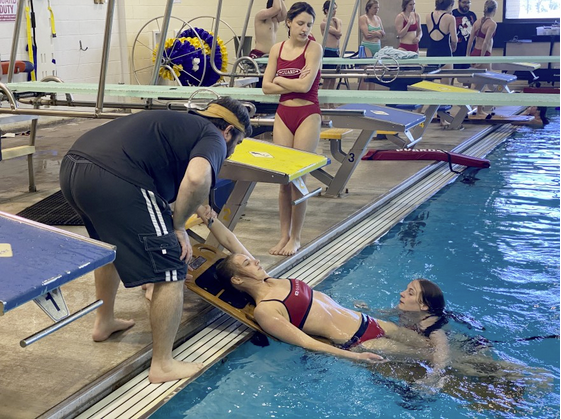 Brian Hill, left, shows lifeguard trainees how to place a victim onto a backboard. Hill manages the aquatics program for the city of Wichita.

Pools depend on guards returning year after year, and on younger swimmers envisioning themselves on the lifeguard stand.

“So
much of it is kids growing up going to the pool every day,” said Joe
Hutchinson, a high school swim coach who manages a private pool in east
Wichita. “They see their older friends who are lifeguards, and they say,
‘I want to do that next summer,’ and then they start getting ready for
that job and getting certified.

“Since there wasn’t the
opportunity to see your friends be lifeguards last summer,” he said,
“that new wave of lifeguards that normally fills in those empty spots
just isn’t there.”

It’s also hot-weather work that toggles between
boredom and stress — part babysitting, part lifesaving. And it’s not
for everybody.

“It can be very difficult to deal with people.
That’s the hardest part,” said 18-year-old Jacob Steffen, who has worked
at Wichita-area pools for two years.

“Last summer we had a very
weird schedule due to the coronavirus, so we were open for two hours at a
time and then closed for an hour,” he said. “So I had to deal with a
lot of very angry people, because you have to kick them out of the
pool.”

Jared Rutti, recreation supervisor of Garden Rapids at the Big Pool water park in Garden City, said he has 44 lifeguards hired so far. He could use up to 60.

Aaron
Stewart, Garden City’s parks and recreation director, said the novelty
of the new park has helped with recruiting lifeguards and other
employees.

“We have a brand new water park for people to work at,” Stewart said. “So that’s attractive and exciting.”

As
vaccinations increase and COVID restrictions ease, swimming pools,
beaches and water parks are reopening across the state. And they require
teams of lifeguards to keep them running safely.

Alanis Balza Medina, a 20-year-old who started lifeguarding when she was 16, is glad to be back. 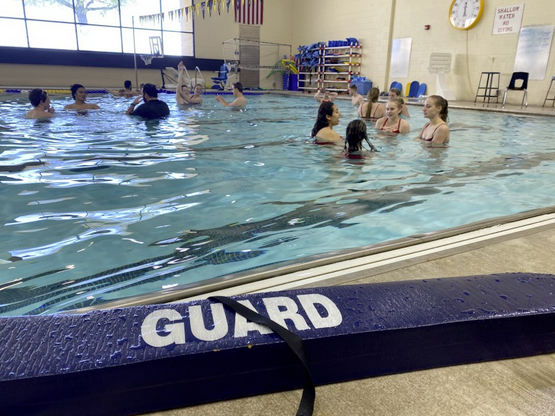 About a dozen teenagers and young adults attended a recent lifeguard certification class at Northwest High School. Because of COVID-related closures last year, some pools are having a hard time finding enough lifeguards.

“It’s my go-to summer job,” said Balza Medina, who is pursuing a
degree in elementary education at Emporia State University. “This is the
job that I enjoy and (that) gives me a lot of training for my future.
… And it’s a great work environment to be in as well.”

She swam
at Wichita’s Harvest Pool as a young child and remembers admiring the
lifeguards and appreciating how friendly they were. She started
lifeguarding at Wichita’s Evergreen Pool and worked her way up to the
head guard position. Now she manages Orchard Pool and trains guards
throughout the summer.

“It’s a tough job sometimes. However, when
it’s just the guards, it’s a community — basically a family — that you
become, because you’re always with these people,” she said.

“You
have to learn to work as a team and make sure you can function together
as a whole. Because if you don’t, there’s someone’s life in danger.”

Lifeguards need to be at least 15, complete a three-day training session and pass a certification test.

Talk
to any longtime lifeguard, and you’ll hear stories about life-saving
rescues. Balza Medina recalls an incident in 2018, when a young girl
fell off the side of an elevated diving board and had to be treated on
site and taken to the hospital. 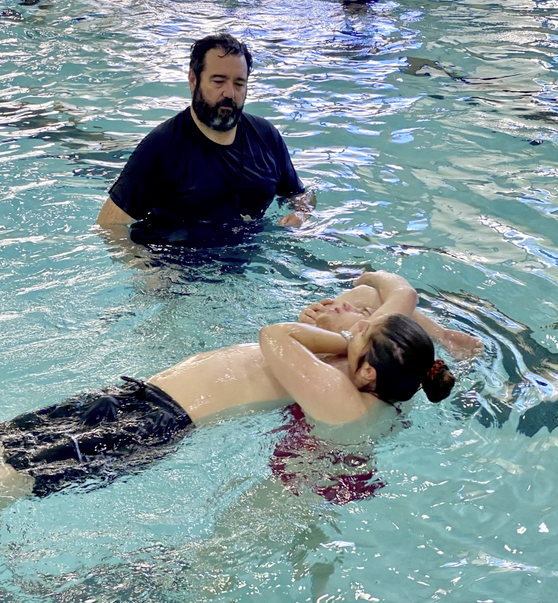 “That was probably the scariest situation that I’ve had,” she said.
“It’s not something that people necessarily think about, but we go
through very extensive training to be prepared to protect our patrons.”

Sam
Cortes was only 15 and a first-year guard at Minisa Pool in Wichita
when he performed his first save. During a pool party, a young child
fell into the deep end. His father panicked and jumped in after him.
Neither one could swim.

“So my very first save was a double
rescue,” said Cortes, who trains guards and manages the aquatics program
at McConnell Air Force Base.

“It was all adrenaline, because like
I tell people: It goes back to our training,” he said. “You’re only as
good as your training, so in any emergency you go back to what you’ve
trained for.”

Suzanne Perez reports on education for KMUW in
Wichita and the Kansas News Service. You can follow her on Twitter
@SuzPerezICT or email her at [email protected]

In a since-deleted tweet responding to a question about a potential contract extension for Kansas City Chiefs safety Tyrann Mathieu, Mathieu tweeted that he's "probably not" going to get a new deal in … END_OF_DOCUMENT_TOKEN_TO_BE_REPLACED

KANSAS CITY, Mo. — A manhole left uncovered is the source of concern after a woman damaged her car in Kansas City. The single-car crash happened at 11th Street and Tracy Avenue during the busy … END_OF_DOCUMENT_TOKEN_TO_BE_REPLACED

Kansas City, Missouri's COVID-19 emergency order was set to expire at the end of the month. But Mayor Quinton Lucas made it clear Friday that private businesses can still set their own rules.Any … END_OF_DOCUMENT_TOKEN_TO_BE_REPLACED

KANSAS CITY, MO (KCTV/AP) — All restrictions meant to slow the spread of the coronavirus were being rescinded as of midday Friday in Kansas City, Missouri, following guidance from the U.S. Centers for … END_OF_DOCUMENT_TOKEN_TO_BE_REPLACED