As afternoon turned to evening on Friday, Shenya Robinson and two friends sat in lawn chairs under the skybridge in the shadow of Union Station.

It was Robinson’s birthday, and she celebrated with her first live concert since the COVID-19 pandemic changed nearly everything for everybody.

“I’m super excited to come back out to it,” Robinson said. “Live music is just a part of life for me.”

Like a lot of music lovers, Robinson has needed the relief that only live music can provide. And more than three weeks after Kansas City, Missouri, dropped its face mask and indoor social distancing rules, announcements from the president that the country will have enough vaccines for all adults by the end of May are encouraging her to find it.

Robinson, who lives in Lenexa, said she had no hesitations about going out this weekend. She didn’t even bring a mask.

“On a beautiful day like today, it’s just the perfect way to end a s—– week,” she said.

“The type of crowd that I go and associate with — mostly my age group, very responsible people. So I’m sure most of them I assume are fully vaccinated,” she said.

Appollis, 61, is a jazz and big band fanatic, and ventured back out to her favorite spot, The Phoenix, as soon as they started having shows again.

“It was great because in the beginning they were still doing the social distancing with the chairs and stuff, so you felt a little protected. But now they’re full capacity, so we’re sitting almost back-to-back,” said Appollis.

She summed up what many in the mostly-maskless crowd were feeling.

“I don’t think it’s fully, fully back to normal because there’s still that cautiousness, you know? That apprehension, that ‘is-this-really-over?’” she said.

Lemonade Park has been one of the city’s most popular outdoor operations since it opened during the pandemic.

The safety-minded entertainment venue is a partnership between Wes Gartner and Jill Myers, of Voltaire and Moxie Catering, and Steve Tulipana and Shawn Sherrill, who also co-own the live entertainment joints RecordBar and MiniBar.

Both indoor venues have been mostly dormant for more than a year, Tulipana said.

“I’ve loved what we’ve been able to do at Lemonade Park,” Tulipana said. “It’s definitely put some money in the bands’ pockets and put some money in our employees’ pockets, but the numbers that we do out there — it is subsistence.”

Besides, he said, outdoor concerts are just not the same as indoors, where you can be immersed in the music, audience and mood. 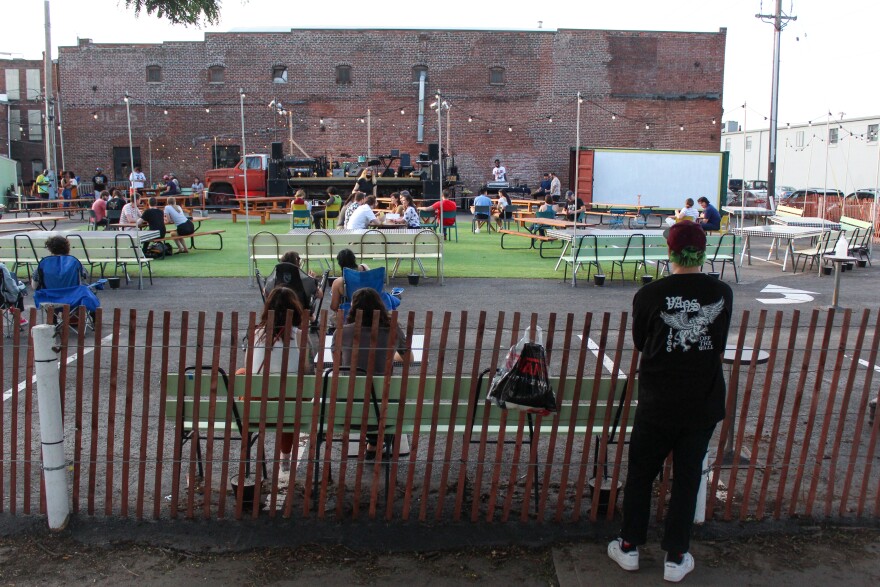 Lemonade Park, in the West Bottoms, is designed with distancing in mind. “Technically, we could sell a lot more tickets,” said co-owner Steve Tulipana. “But I think we still want to honor the people that invested in those shows, that wanted to have an environment where people weren’t on top of each other.”

According to the Centers for Disease Control and Prevention, 42% of Missourians have gotten at least one dose of a COVID-19 vaccine, along with 47% of Kansans.

Tulipana said, as those vaccination rates tick up across the country, bands are increasingly telling agents they’re ready to book live gigs again.

“I am seeing, come July, a lot of events,” he said. ”We’re announcing a lot of stuff, and a lot of people are getting back on tour.”

If the stock price of concert company Live Nation is any indication, Tulipana is not alone in thinking Americans are raring for live music’s return. Shares for that company hit an all-time high in March, and have hovered there since.

But the fate of many venues, RecordBar included, is not guaranteed. Tulipana said he’s still waiting to hear back on his application for federal aid money.

“And if that doesn’t happen we’d have to have three times the business come fall, when all our idle loans and stuff that paid our rent for the last year come due,” he said.

“I actually just went to my first (live show) since the pandemic,” said Kevin Morby, who spent part of his childhood in Kansas City and settled here again in 2017, after making a name for himself on the indie and folk rock scenes.

The band was Heartless Bastards, the venue was the Mohawk in Austin, Texas.

“It was kind of just like spur of the moment,’” he said, “and it was so great. It was such an amazing experience.”

Since the pandemic has waned, Morby has booked his first performances back: three-nights at Tulipana’s Lemonade Park, which sold out days in advance. Morby will take the stage with Waxahatchee, Katie Crutchfield’s indie music project, on Sunday, Monday and Tuesday nights.

The two have been living together since before the novel coronavirus gripped the world.

“I think that people are just really craving, just really needing live music back,” he said.

Morby has plans for outdoor shows and festivals throughout the summer, and doesn’t predict a transition to indoor work until the fall, providing outbreaks remain rare.

“I think it’s a huge blessing that we’re all able to keep in touch … via the internet,” he said. “But I think the spontaneity (of live music) is exactly what everyone has been thirsting for, and we’re now starting to see come back.” 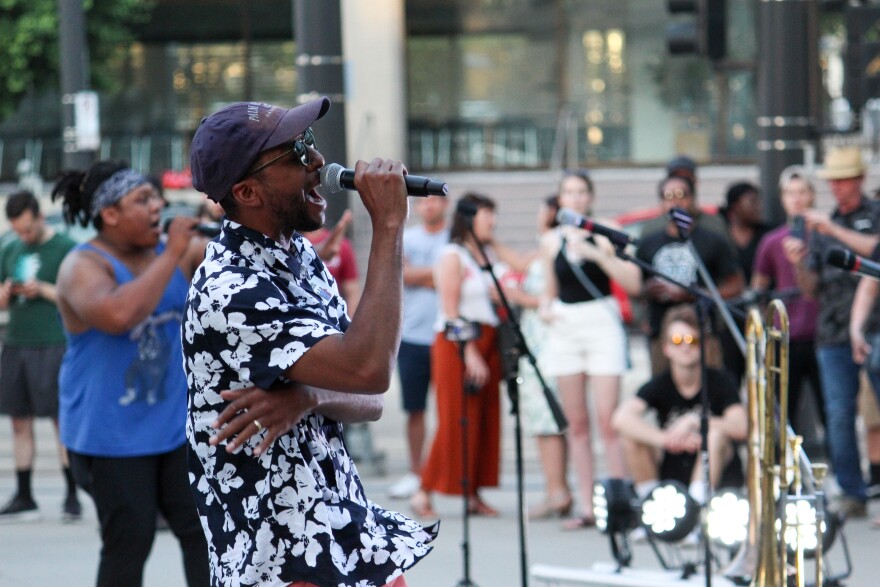 Rappers Kemet the Phantom, in the foreground, and Kadesh Flow teamed up with the Marcus Lewis Big Band to form Brass and Boujee. The group performed outside Kansas City’s Union Station on Friday.

Other signs of normalcy are appearing as well. Reviving a longstanding live music tradition, one band member at Friday’s Troostival event urged the audience closer to the stage.

“Now it feels like a concert!” he said into the microphone, as dozens of plastic chair legs simultaneously scooted across the concrete.

“We have a mobile stage that allows us to go anywhere in the country … so we figured, why not start now by spreading the good news about the incredible Black musical talent here in Kansas City,” said Kemet Coleman, known onstage as Kemet the Phantom, in an interview before the show. “We’ve also overcome a little bit of this COVID pandemic, and we’re now able to celebrate.”

Coleman is also the founder of Troostival, a festival in October aimed at amplifying Black creatives while combating racial injustice. Not only does he hope to see that main event go off as usual this fall, Coleman also has plans for two more pop-up events in June.

As far as coronavirus precautions go, Coleman said he’ll be following along with any and all city guidelines, this weekend and for the foreseeable future.

In a since-deleted tweet responding to a question about a potential contract extension for Kansas City Chiefs safety Tyrann Mathieu, Mathieu tweeted that he's "probably not" going to get a new deal in … END_OF_DOCUMENT_TOKEN_TO_BE_REPLACED

KANSAS CITY, Mo. — A manhole left uncovered is the source of concern after a woman damaged her car in Kansas City. The single-car crash happened at 11th Street and Tracy Avenue during the busy … END_OF_DOCUMENT_TOKEN_TO_BE_REPLACED

Kansas City, Missouri's COVID-19 emergency order was set to expire at the end of the month. But Mayor Quinton Lucas made it clear Friday that private businesses can still set their own rules.Any … END_OF_DOCUMENT_TOKEN_TO_BE_REPLACED

KANSAS CITY, MO (KCTV/AP) — All restrictions meant to slow the spread of the coronavirus were being rescinded as of midday Friday in Kansas City, Missouri, following guidance from the U.S. Centers for … END_OF_DOCUMENT_TOKEN_TO_BE_REPLACED