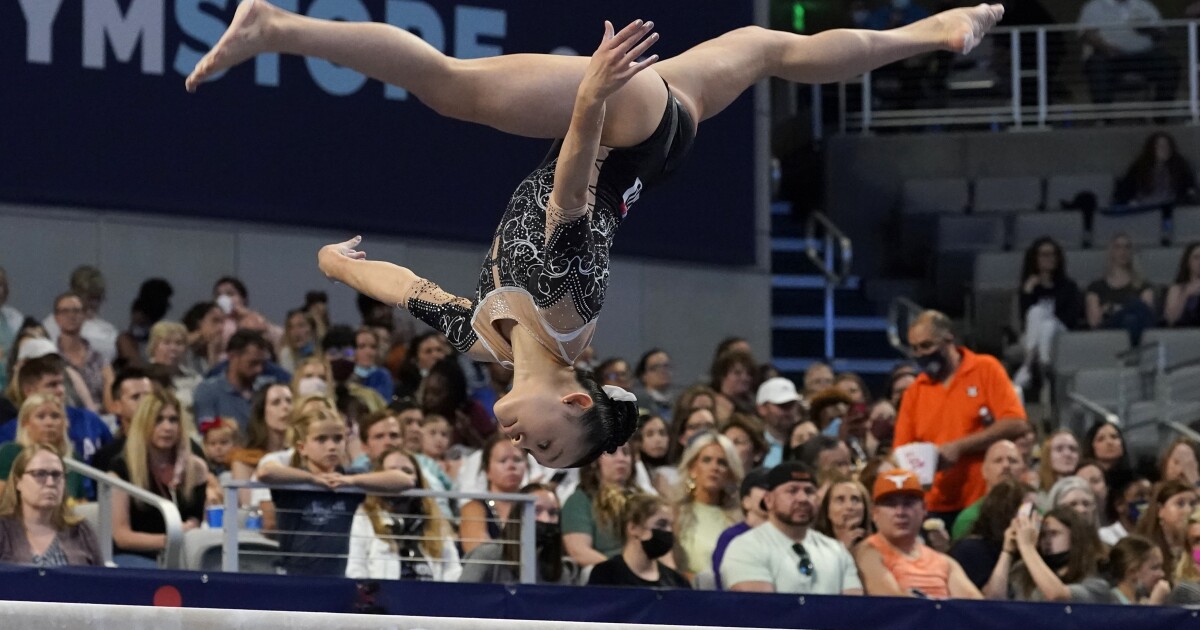 The 17-year-old, who is part of the GAGE Center in Blue Springs, will be going against fellow GAGE gymnast Kara Eaker. The first round starts on Friday.

“It’s incredibly exciting to see that she can compete with really the best in the world and it’s an amazing experience,” Marco Wong, Leanne’s Dad said.

The family never expected their little girl, who loved to flip and turn, to one day to be heading to the Olympic Trials.

“It’s pretty hard to believe that it actually could happen and I guess it kind of teaches us don’t be afraid to dream. Think big,” Marco Wong said.

Leanne’s love for the sport started at a young age.

Before she started gymnastics, she tried ice skating, but she wasn’t a fan.

Her mom said once she started gymnastics and started competing, she started winning constantly.

Her rare talent stood out to Al Fong, the owner of the GAGE Center where she trains in Blue Springs. The center has produced several Olympians.

“Al said, ‘Yeah I think she has some kind of talent here. We want to proceed beyond that, perhaps training her as elite,'” Ding said.

The then 13-year-old decided she would go elite, and it’s paying off as she is close to competing in the Olympics in Tokyo.

While she works to accomplish her goal, her family will be in the stands cheering her on.

The youngest Wong even gave his sister a pep talk before championships recently with all of his gymnastics knowledge.

“He said, ‘This is what you are going to do Leanne. You gotta be consistent and if you can do this and you hit this and get this score, you are definitely going to be the top,'” Ding said.

The family said they are beyond excited about what their daughter has accomplished in life. Win or lose, they will forever be proud of their Leanne.

“Just to see that she can really perform at that level and train so hard and after all these years of training that…you can see her grow in so many ways. That’s been really exciting,” Marco Wong said.

Leanne will attend the University of Florida in the fall and she will be on their gymnastics team.

In a since-deleted tweet responding to a question about a potential contract extension for Kansas City Chiefs safety Tyrann Mathieu, Mathieu tweeted that he's "probably not" going to get a new deal in … END_OF_DOCUMENT_TOKEN_TO_BE_REPLACED

KANSAS CITY, Mo. — A manhole left uncovered is the source of concern after a woman damaged her car in Kansas City. The single-car crash happened at 11th Street and Tracy Avenue during the busy … END_OF_DOCUMENT_TOKEN_TO_BE_REPLACED

Kansas City, Missouri's COVID-19 emergency order was set to expire at the end of the month. But Mayor Quinton Lucas made it clear Friday that private businesses can still set their own rules.Any … END_OF_DOCUMENT_TOKEN_TO_BE_REPLACED

KANSAS CITY, MO (KCTV/AP) — All restrictions meant to slow the spread of the coronavirus were being rescinded as of midday Friday in Kansas City, Missouri, following guidance from the U.S. Centers for … END_OF_DOCUMENT_TOKEN_TO_BE_REPLACED