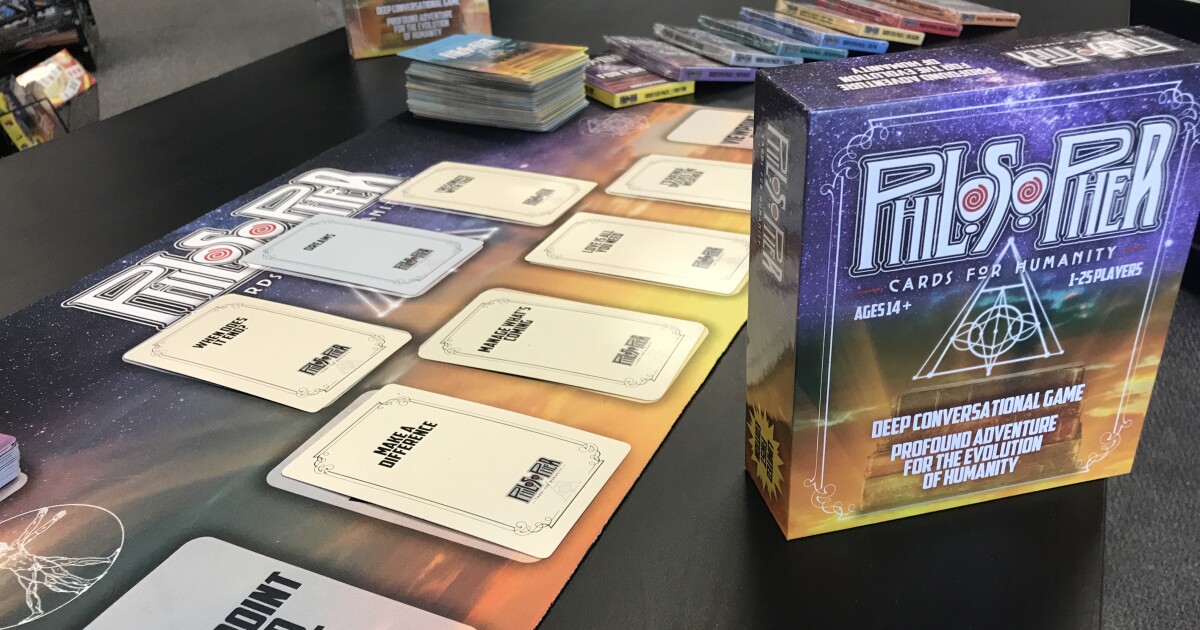 OVERLAND PARK, Kan. — Americans are turning to board games to fight boredom, avoid screens and create connections during the COVID-19 pandemic. NBC reports major game makers saw sales increase toward the end of 2020 and into 2021.

Loni Bernard is hoping to ride that wave of enthusiasm. The woman from Kansas City, Missouri, created her own card game called Philosopher.

“It plays like Apples to Apples but there’s more to it,” Bernard said referencing the popular card game.

In Philosopher, everyone receives viewpoint cards. Each round a new player plays the role of philosopher.

“Every body gets chance to talk about what really matters to them in their heart,” Bernard said.

She hopes the game promotes deeper human connection. Game topics range from serious to funny and players can purchase booster packs under the topics of human experience, history, religion, and more.

“Sales since then have just been through the roof. We’re either double or triple our normal sales numbers for this time,” Jonathan Reinig the store manager at Game Cafe said.

In an emailed interview, Shawn Davison, an owner of Level One Game Shop, said there’s been a certain level of nostalgia associated with the gaming boom.

“The most significant increase was definitely in Pokemon,” Davison said in the email. “Cards have increased significantly in price since 2019, and the number of people who have started collecting has been really awesome to see. We even have seen Kansas City Chiefs players get into collecting! Other trading card games have also seen a large increase in players and collectors.”

Over the phone, Walter Stewart, general manager at TableTop Game and Hobby, said games for small groups and families have been more popular than party games for larger crowds.

In January, TableTop opened the Cardboard Corner. The cafe is a gathering space where people can eat, drink and play board games. Game Cafe offers a similar gathering place.

The retailers described varying degrees of backlogs due to manufacturing and shipping delays. Level One’s website will now automatically notify customers when the store restocks a particular item.

Bernard is currently raising money to print and distribute Philopsher on the crowdfunding website Kickstarter. She says no matter how the Kickstarter campaign goes, she plans to begin selling her game at stores around Kansas City by the end of July.

Eventually, she wants to sell the game around the world.

Bernard will be selling her game at the KC Mystic Fair Friday, June 18 from 3 to 8 p.m. at the Cotillion Room and Garden at 16816 E US Highway 40, Independence, Missouri.

In a since-deleted tweet responding to a question about a potential contract extension for Kansas City Chiefs safety Tyrann Mathieu, Mathieu tweeted that he's "probably not" going to get a new deal in … END_OF_DOCUMENT_TOKEN_TO_BE_REPLACED

KANSAS CITY, Mo. — A manhole left uncovered is the source of concern after a woman damaged her car in Kansas City. The single-car crash happened at 11th Street and Tracy Avenue during the busy … END_OF_DOCUMENT_TOKEN_TO_BE_REPLACED

Kansas City, Missouri's COVID-19 emergency order was set to expire at the end of the month. But Mayor Quinton Lucas made it clear Friday that private businesses can still set their own rules.Any … END_OF_DOCUMENT_TOKEN_TO_BE_REPLACED

KANSAS CITY, MO (KCTV/AP) — All restrictions meant to slow the spread of the coronavirus were being rescinded as of midday Friday in Kansas City, Missouri, following guidance from the U.S. Centers for … END_OF_DOCUMENT_TOKEN_TO_BE_REPLACED