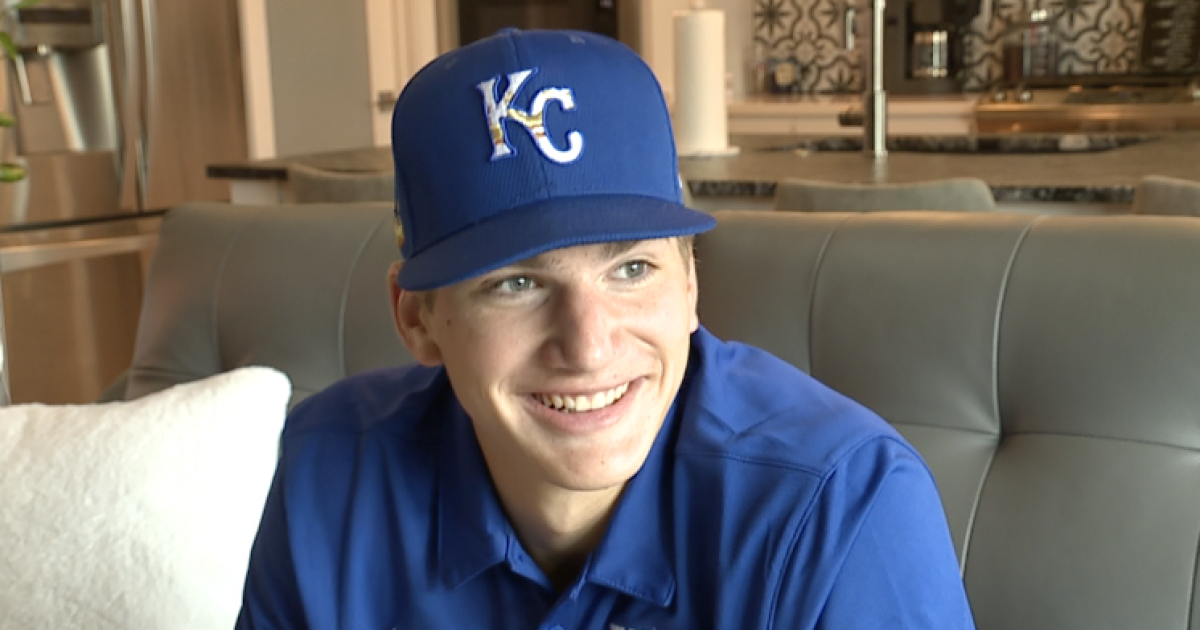 When Kudrna joins the club, it won’t be his first encounter with the front office.

“I’ve gotten to meet Dayton [Moore] and talk to him a couple of times, and his son backed into my car so that was kind of the first way I got to meet him,” Kudrna said.

The incident happened at Building Champions Baseball Academy in Overland Park. Kudrna told 41 Action News he got a new car door out of that meeting, and now he has the deal of his dreams.

Following Day One of the MLB Draft, Kudrna said he was certain he would be picked by the Royals on Day Two.

“I’ve always been a Royals fan you know, since I was here,” Kudrna said, “and we moved to Texas for a little bit and I watched the Rangers, but I always loved the Royals and kind of a dream team as a kid. And you always want to play for your hometown team and now that I’m a Royal, it’s surreal.”

Kudrna was a student-athlete at Blue Valley Southwest High School, played on the Royals Scout Team and committed to play at Louisian State University.

“It’s been a little stressful, but I’ve enjoyed every moment of it, you know,” Kudrna said. “Not many kids get to go through it, and I knew I had two good options and you take it day by day and you figure it out. And I always said I’d let it play out and the best would happen.”

Debating what he would do after high school, his mother told 41 Action News he would be successful on any route he takes.

“He’ll take the challenge,” Wendy Kudrna said. “He’s always been able to adapt to whatever situation and thrive in it.”

Ben Kudrna was the top ranked prospect in Kansas, and the highest drafted Kansas High School player since 2016.

In a since-deleted tweet responding to a question about a potential contract extension for Kansas City Chiefs safety Tyrann Mathieu, Mathieu tweeted that he's "probably not" going to get a new deal in … END_OF_DOCUMENT_TOKEN_TO_BE_REPLACED

KANSAS CITY, Mo. — A manhole left uncovered is the source of concern after a woman damaged her car in Kansas City. The single-car crash happened at 11th Street and Tracy Avenue during the busy … END_OF_DOCUMENT_TOKEN_TO_BE_REPLACED

Kansas City, Missouri's COVID-19 emergency order was set to expire at the end of the month. But Mayor Quinton Lucas made it clear Friday that private businesses can still set their own rules.Any … END_OF_DOCUMENT_TOKEN_TO_BE_REPLACED

KANSAS CITY, MO (KCTV/AP) — All restrictions meant to slow the spread of the coronavirus were being rescinded as of midday Friday in Kansas City, Missouri, following guidance from the U.S. Centers for … END_OF_DOCUMENT_TOKEN_TO_BE_REPLACED