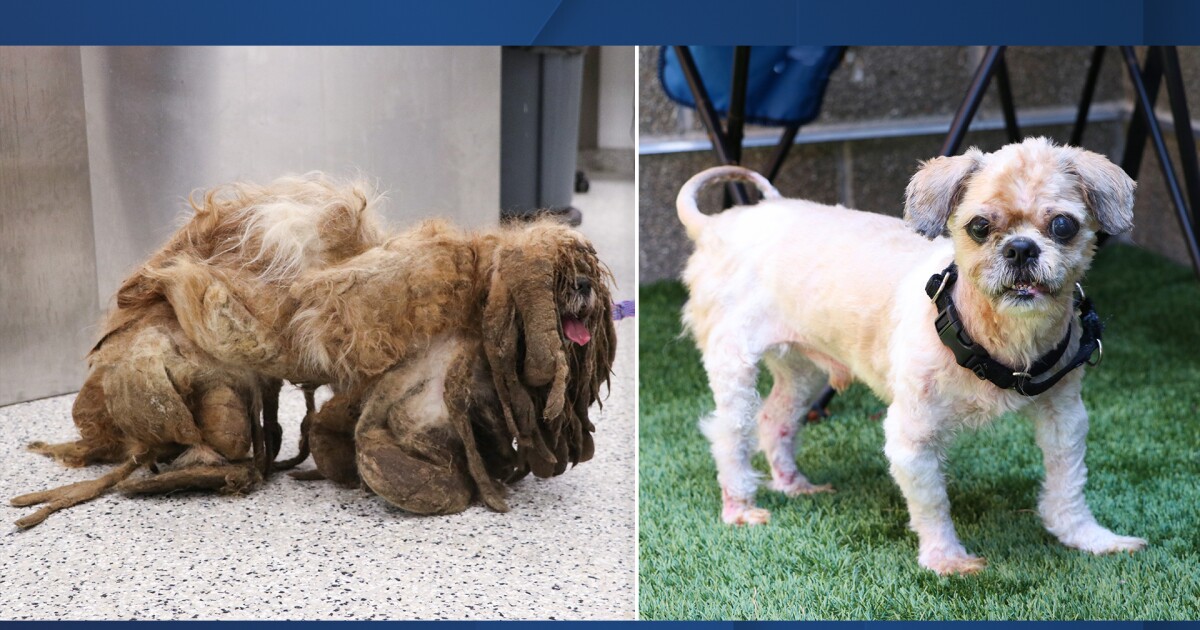 KANSAS CITY, Mo. — A dog found with severely matted fur and other health issues is on the mend thanks to a Good Samaritan and KC Pet Project.

The dog, now named Simon, was dropped off at KC Pet Project on Monday morning by someone who found him on the side of the street. He weighed almost 20 pounds because of the mass of fur and dirt caked on his body.

The KC Pet Project’s veterinary team sedated him and spent two hours shaving him. In the end, they took off more than six pounds of matted fur and dirt.

The shelter posted a video of his transformation on TikTok, where it had been viewed more than 26 million times as of Wednesday afternoon.

Simon will need some dental work and his skin is a bit dry, according to the shelter, but overall, they said they’re happy with his health.

“Everybody loves to see these before and after moments that shows a pet at their very worst and then how, thanks to medicine and love and care, they’re able to make this remarkable transformation,” Tori Fugate, chief communications officer at KC Pet Project, said.

The shelter said Simon is neutered, so it appears he was someone’s pet at some point.

However, he’s not microchipped and didn’t have any tags. They still are looking for his owner, but they have also gotten dozens of requests to adopt him.

Fugate said the help they were able to give Simon is possible because of donations to KC Pet Project’s Roadrunner Medical Fund.
Those interested in donating can do so on the KC Pet Project website.

In a since-deleted tweet responding to a question about a potential contract extension for Kansas City Chiefs safety Tyrann Mathieu, Mathieu tweeted that he's "probably not" going to get a new deal in … END_OF_DOCUMENT_TOKEN_TO_BE_REPLACED

KANSAS CITY, Mo. — A manhole left uncovered is the source of concern after a woman damaged her car in Kansas City. The single-car crash happened at 11th Street and Tracy Avenue during the busy … END_OF_DOCUMENT_TOKEN_TO_BE_REPLACED

Kansas City, Missouri's COVID-19 emergency order was set to expire at the end of the month. But Mayor Quinton Lucas made it clear Friday that private businesses can still set their own rules.Any … END_OF_DOCUMENT_TOKEN_TO_BE_REPLACED

KANSAS CITY, MO (KCTV/AP) — All restrictions meant to slow the spread of the coronavirus were being rescinded as of midday Friday in Kansas City, Missouri, following guidance from the U.S. Centers for … END_OF_DOCUMENT_TOKEN_TO_BE_REPLACED