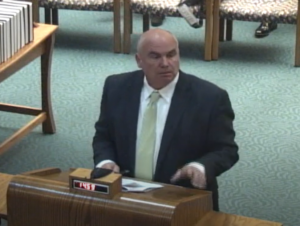 The Kansas Supreme Court dealt with a decision by the Kansas Court of Appeals by focusing on jurisdictional issues without defining boundaries of the Kansas Open Records Act as it pertained to public access to audio records of district court proceedings.
(Tim Carpenter/Kansas Reflector)

The issue before the Supreme Court was whether attorney Linus Baker could compel the Johnson County District Court under the Kansas Open Records Act to release copies of audio recordings from two open court hearings associated with a protection-from-abuse case involving Baker’s adult daughter. Johnson County officials refused to turn over the recordings and a district court judge rejected Baker’s attempt to force release of the audio.

However, the recordings were provided to Baker by the Kansas attorney general’s office as part of the discovery process in Baker’s lawsuit filed in 2017.

Baker appealed the district court’s decision to the Kansas Court of Appeals, which in 2018 reversed the lower court. The Court of Appeals concluded there was no Kansas statute or Supreme Court rule that specifically prohibited or restricted disclosure of audio recordings of open court proceedings.

Baker and lawyers for Johnson County, including Overland Park attorney Joseph Colantuono, were eager for the Supreme Court to consider the case’s implications for KORA.

“We want direction because this is an issue that is capable of repetition,” Colantuono said.

In response, a majority of the Supreme Court agreed to dismiss the appeal after concluding Baker no longer had standing in the legal conflict because he had received the recordings. In terms of involvement by state appellate courts, the Supreme Court majority said both lacked jurisdiction to review the district court’s actions because the issue regarding audio recordings was moot.

The larger public-interest question about boundaries of KORA was left unresolved by the Supreme Court majority.

In view of the dissenters, the Supreme Court’s four-justice majority enabled government agencies in Kansas to refuse release of audio records, surrender the recordings after being sued and otherwise maintain a policy of rejecting requests for that type of record.

Biles wrote that the court’s majority sanctioned a “self-manipulating loophole for public agencies to avoid any practical long term legal precedent under our public records law.”

“Like Lucy in the cartoon series,” Biles said, “dodgy government officials will be able to avoid a bad legal outcome by simply pulling the football away from Charlie Brown at the last possible minute. And, this scenario can just repeat itself to stop inconvenient litigation by concerned citizens under the guise of creating an instant lack of traditional standing while preserving an illegal policy that denies the public access to their government’s records.”

The majority opinion didn’t solve whether the Kansas Open Records Act required a district court to make audio records of open court proceedings available for public inspection. The Supreme Court’s involvement was constrained by Baker’s acquisition of the recordings and his loss of standing to pursue legal claims for that audio, the opinion said.

“When a party loses standing, courts lose jurisdiction,” the majority said. “And, without jurisdiction, we must dismiss the appeal.”

In addition, the Supreme Court majority said they rejected “the dissent’s concerns that public officials will simply provide records when a litigant nears success, then return to a pattern and practice of refusing records in appropriate cases. The dissent’s fears are unfounded.”

In 2015, the Johnson County District Court administrator told Baker the two courtroom recordings were exempt from disclosure under KORA. The records custodian said Baker could purchase a transcript of the proceedings from a court reporter. Baker said he preferred to hear the actual recordings and sought district court intervention, but Chief Judge Kevin Moriarty denied that request.

The Johnson County custodian of records contended complying with Baker’s view of KORA could result in disclosure of privileged attorney-client conversations inadvertently captured by recording devices.

As Baker’s lawsuit proceeded, an attorney with the office of Attorney General Derek Schmidt gave Baker copies of the two audio recordings. The attorney general’s office said the response to Baker’s discovery request wasn’t an “admission to the allegations and claims in your petition.”

The Supreme Court’s minority opinion argued KORA was designed to make sunshine the “strongest antiseptic” for government secrecy with its rays penetrating areas previously closed to the public. The Kansas Legislature declared KORA’s provisions “shall be liberally construed and applied to promote such policy.”

The Supreme Court minority asserted the majority latched onto a way of avoiding “our duty to safeguard this state’s steadfast promise to maintain an open government.”

Biles wrote the recordings were “begrudgingly produced” by the attorney general’s office and the Johnson County records custodian adhered to the position state law didn’t require public inspection of the recordings.

“I would further hold these audio recordings are plainly subject to public disclosure under the act,” Biles wrote. “And, I would add that latter conclusion is not anywhere near a close call. The majority simply avoids it.”

In a since-deleted tweet responding to a question about a potential contract extension for Kansas City Chiefs safety Tyrann Mathieu, Mathieu tweeted that he's "probably not" going to get a new deal in … END_OF_DOCUMENT_TOKEN_TO_BE_REPLACED

KANSAS CITY, Mo. — A manhole left uncovered is the source of concern after a woman damaged her car in Kansas City. The single-car crash happened at 11th Street and Tracy Avenue during the busy … END_OF_DOCUMENT_TOKEN_TO_BE_REPLACED

Kansas City, Missouri's COVID-19 emergency order was set to expire at the end of the month. But Mayor Quinton Lucas made it clear Friday that private businesses can still set their own rules.Any … END_OF_DOCUMENT_TOKEN_TO_BE_REPLACED

KANSAS CITY, MO (KCTV/AP) — All restrictions meant to slow the spread of the coronavirus were being rescinded as of midday Friday in Kansas City, Missouri, following guidance from the U.S. Centers for … END_OF_DOCUMENT_TOKEN_TO_BE_REPLACED