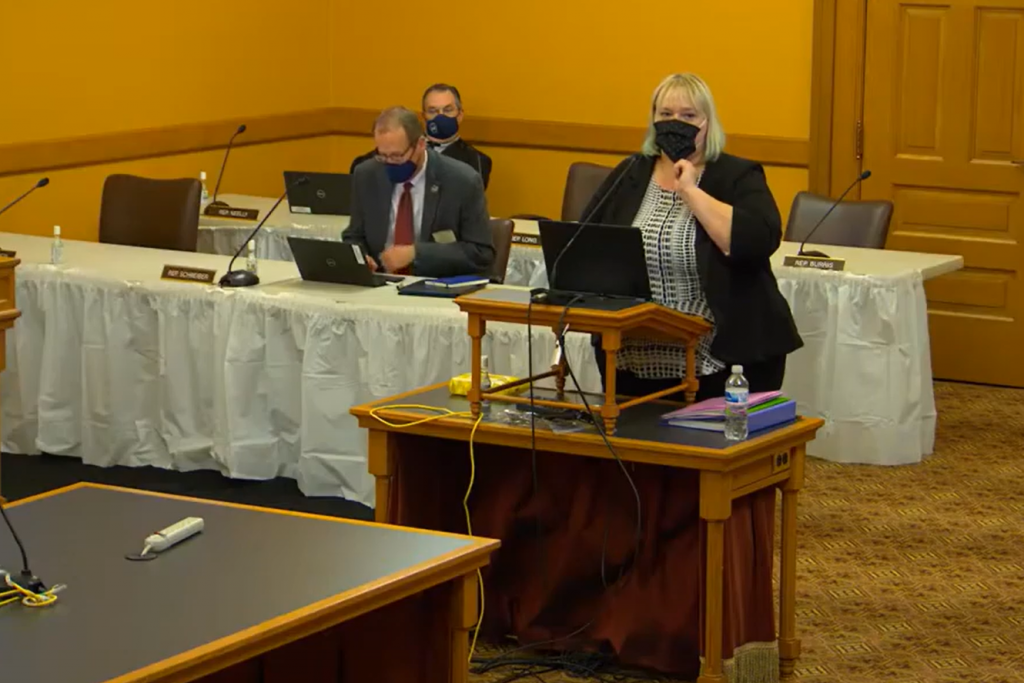 TOPEKA — The executive director of the Kansas board overseeing court-appointed defense in felony criminal cases says the state public defender system is in crisis.

Issues with caseloads, staffing, pay parity and overall lack of infrastructure are weighing down public defenders, said Heather Cessna, executive director of the Kansas Board of Indigent Defense Services. These issues have been mounting for decades and have reached unmanageable levels, she said.

Cessna provided the House Judiciary Committee with an update last week of the state public defense system’s struggles. The most significant issue, Cessna said, is that public defenders are working far too many hours and being paid far too little for their work, creating retention issues down the line.

Current national standards recommend defense attorneys work no more than 150 felonies per year per attorney. At BIDS’ 11 trial offices across Kansas, the average in 2020 was 205 cases per attorney.

Only three of these offices were able to come in under the recommended threshold, and maintaining proper caseload came at a cost. On the opposite end, Sedgwick County had a staggering 278 cases per attorney.

In a 40-hour workweek, the high case load allows just 10 hours per case for any level of case. That would be malpractice, so defense attorneys are left working longer hours to ensure proper care is given to each case, Cessna said.

“The reality is that in order to cope with that, our attorneys are working evenings and weekends constantly, which is what partially burns them out and causes these turnover issues that we’ve been experiencing,” Cessna said.

Cessna reported 81% of BIDS employees said they believe in the work they do, but 55% indicated they had considered leaving the agency within the past year because of caseloads and pay.

Assigned counsel pay is $80 per hour for cases they are working on. A 2017 Kansas Bar Association survey found that the average hourly rate of private counsel in Kansas was around $225 per hour, meaning BIDS attorneys are making about 64% below the market rate.

“If I recall, I was charging $80 an hour for my services 40 years ago,” said Rep. John Carmichael, D-Wichita and a former attorney. “How in the world do you find any lawyer, other than people working for BIDS, who would work for $140 an hour in today’s world?”

Beyond pay, BIDS also needs to upgrade its case management system. And there is no training division, unusual for a system of this size, Cessna said.

“I recall some time back around 2005, in the public defender’s office in Garden City, Kansas, the staff and the lawyers were buying their own toilet paper,” said Rep. John Wheeler, a Republican from Garden City and retired attorney. “How long has this crisis been going on?”

Cessna said it has been an ongoing issue for decades. She said BIDS should have expressed these concerns to the Legislature sooner but under previous leadership did not always confront problems head-on.

The board also wants $3.5 million to increase the statutory pay rate from $80 to $100 for assigned counsel. That rate would go up again in future phases.

“Right now, that public defense system is not functioning,” Cessna said. “Our hope is that with the budget requests … we could eventually move towards this holistic defense program in a way that will eventually result in some cost savings down the road, that we will be able to solve those problems in a fundamental manner and, at the end of the day, be able to provide appropriate support for our public defenders and our assigned counsel and our clients.”

In a since-deleted tweet responding to a question about a potential contract extension for Kansas City Chiefs safety Tyrann Mathieu, Mathieu tweeted that he's "probably not" going to get a new deal in … END_OF_DOCUMENT_TOKEN_TO_BE_REPLACED

KANSAS CITY, Mo. — A manhole left uncovered is the source of concern after a woman damaged her car in Kansas City. The single-car crash happened at 11th Street and Tracy Avenue during the busy … END_OF_DOCUMENT_TOKEN_TO_BE_REPLACED

Kansas City, Missouri's COVID-19 emergency order was set to expire at the end of the month. But Mayor Quinton Lucas made it clear Friday that private businesses can still set their own rules.Any … END_OF_DOCUMENT_TOKEN_TO_BE_REPLACED

KANSAS CITY, MO (KCTV/AP) — All restrictions meant to slow the spread of the coronavirus were being rescinded as of midday Friday in Kansas City, Missouri, following guidance from the U.S. Centers for … END_OF_DOCUMENT_TOKEN_TO_BE_REPLACED