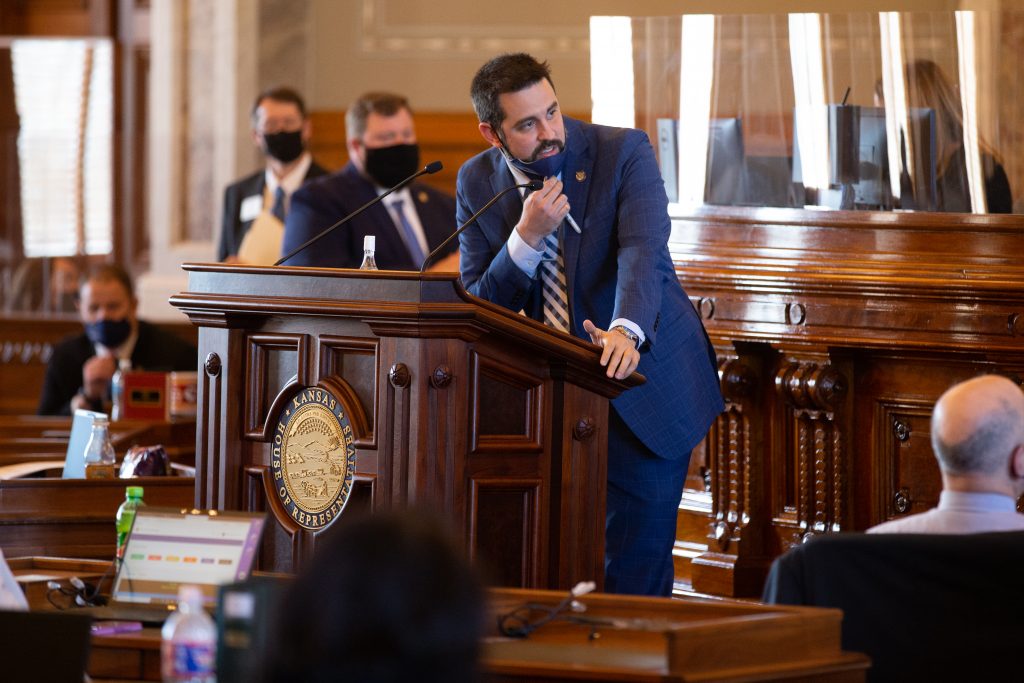 TOPEKA — Kansas Rep. Mark Samsel cautioned his colleagues Thursday in a speech on the House floor about the dangers of criminalizing “a routine act” between a husband and wife.

Current Kansas law shields spouses from prosecution for sexual battery. House Bill 2120 would make it a crime for one spouse to touch the other with the intent to arouse sexual desires without consent.

“To me, it gets to what does the sanctity of marriage mean?” Samsel said. “And I’m single, so I’m not the best person to speak to this. But when you do get married, what does that mean? And what implied consent are you giving?”

The Wellsville Republican asked colleagues to consider this hypothetical: “Imagine after a long, hard day at work, and let’s say wife or husband is already asleep, and then perhaps touches the spouse hoping to arouse sexual desires, or perhaps it happens the next morning. But to me, I think if we change this law, a crime has been committed.”

Samsel pointed out that some marriages end badly — “divorce or other situations” — and even though the victim would still have to overcome the burden of proof, the spouse would be subject to a felony charge.

“My concern,” Samsel said, “is we are triggering ethical obligations for what would seemingly be a routine act between man and woman.”

He continued: “When you sign up for marriage, what does that involve? Not just for the next day, but for hopefully 30 and 40 and 50 years to come. There was a couple of college students before covid that came through last year. And instead of just no meaning no, and trying to get that for consent, it was actually yes means yes. So those are discussions that I hope this body continues to have.”

Proponents of the bill said it was important to remove the last spousal exemption for a sex-related crime under Kansas law.

Rep. Brett Parker, D-Overland Park, said the bill doesn’t create a new crime but rather applies the law evenly across all relationships.

“So what is now illegal in a committed relationship between two engaged people applies the same way if they are married,” Parker said. “So all this would say is that marriage does not alleviate the need for consent.”

The bill received bipartisan support with 110 voting for it and 10 men and three women opposed.

“I want to acknowledge all the bipartisan work that went into repealing this nonsense exception,” said Rep. Nick Hoheisel, R-Wichita, in a tweet after the House debate. “A marriage certificate IS NOT a license for an individual to sexually abuse or batter their spouse.”

KANSAS CITY, Mo. — The environment, children and smoking are issues Vari Patel and three other teens from the Kansas City metro felt needed attention so people can live healthier lives. "And when … END_OF_DOCUMENT_TOKEN_TO_BE_REPLACED

KANSAS CITY, Mo. — Kansas City, Missouri, Mayor Quinton Lucas confirmed Monday not only that he’d been married earlier this month — but that he and his wife welcomed a baby boy, too. In a post to … END_OF_DOCUMENT_TOKEN_TO_BE_REPLACED

KANSAS CITY, Mo. — Kansas City, Missouri, leaders once again will look into renaming city streets in honor of Dr. Martin Luther King Jr. The city's Board of Parks and Recreation Commissioners will … END_OF_DOCUMENT_TOKEN_TO_BE_REPLACED