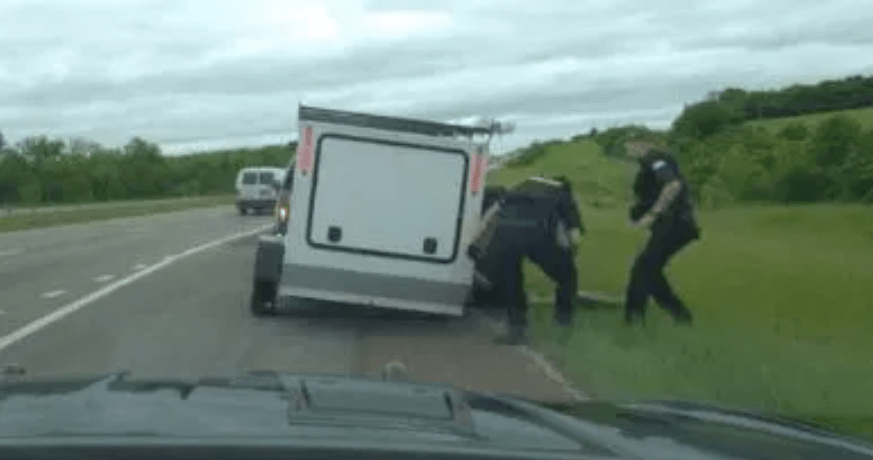 EUDORA, Kan. — A Kansas Highway Patrol Trooper and three members of the Eudora Police Department are credited with saving a man’s life.

Lt. Dennis Shoemaker with the Kansas Highway Patrol and the police officers responded to an accident on K-10 Highway in Douglas County on May 28. A man had tried to change a flat tire on the shoulder when his trailer fell on him and trapped him underneath.

According to the Kansas Highway Patrol, the four officers lifted the trailer off the man and free him. The man’s injuries were so severe that three officers began first aid while the fourth officer shielded the man’s wife from his injuries.

According to the patrol’s Facebook post, Shoemaker speaks to or texts with the man’s family almost daily.

Other responders said if the officers hadn’t of arrived when they did, the victim likely wouldn’t have survived.

In a since-deleted tweet responding to a question about a potential contract extension for Kansas City Chiefs safety Tyrann Mathieu, Mathieu tweeted that he's "probably not" going to get a new deal in … END_OF_DOCUMENT_TOKEN_TO_BE_REPLACED

KANSAS CITY, Mo. — A manhole left uncovered is the source of concern after a woman damaged her car in Kansas City. The single-car crash happened at 11th Street and Tracy Avenue during the busy … END_OF_DOCUMENT_TOKEN_TO_BE_REPLACED

Kansas City, Missouri's COVID-19 emergency order was set to expire at the end of the month. But Mayor Quinton Lucas made it clear Friday that private businesses can still set their own rules.Any … END_OF_DOCUMENT_TOKEN_TO_BE_REPLACED

KANSAS CITY, MO (KCTV/AP) — All restrictions meant to slow the spread of the coronavirus were being rescinded as of midday Friday in Kansas City, Missouri, following guidance from the U.S. Centers for … END_OF_DOCUMENT_TOKEN_TO_BE_REPLACED