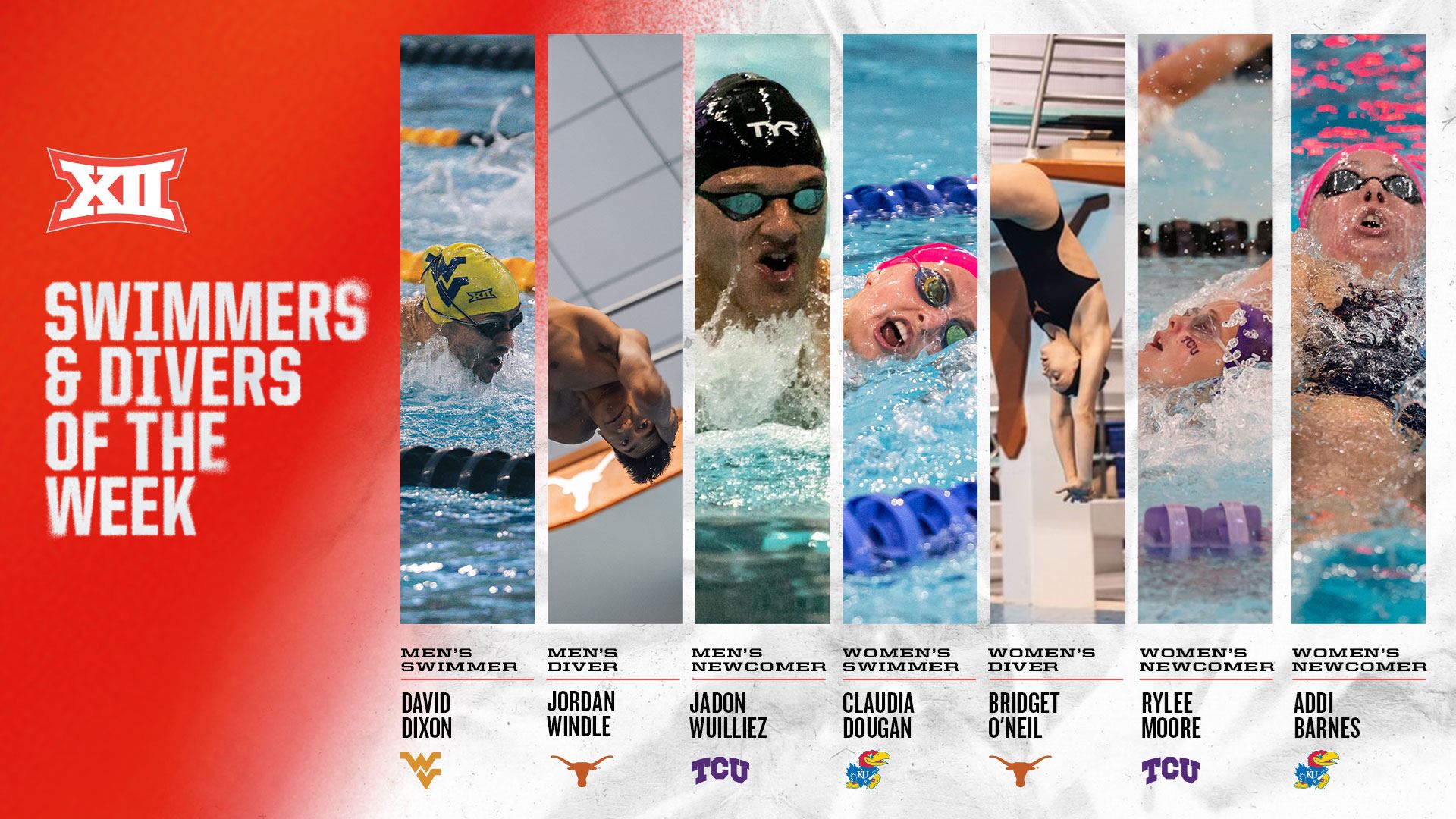 Dougan won four events at the Kansas Classic, including individually in the 100 freestyle (49.85) and the 200 freestyle (1:50.01). The sophomore also anchored the winning Kansas 200 freestyle and 400 medley relay teams to help the Jayhawks win the classic for the fourth straight year.

O’Neil claimed first place in the 1-meter (327.50) at the Texas Diving Invitational. The sophomore also finished in third place in the 3-meter (372.20). This is the Southlake, Texas native’s second Big 12 weekly award.

Barnes closed out the fall season on a high note for the Jayhawks, recording four top-five finishes at the Kansas Classic. The native of Overland Park, Kansas finished second in a pair of individual events, including the 500 (4:52.01) and 1,650 freestyle (17:04.16).

Windle started the UT Diving Invitational with 463.05 points to share the top spot of the men’s 3-meter springboard and earned his fourth Big 12 Diver of the Week this season and his 21st career Big 12 weekly honor. The four-time defending Big 12 Diver of the Year claimed his second event of the UT diving invitational while competing on platform for the first time this season as the All-American was the lone competitor to break 400 points in the event, ending the six-round event with 402.35 points. Windle also finished third in the 3-meter with 393.45 points.

In a since-deleted tweet responding to a question about a potential contract extension for Kansas City Chiefs safety Tyrann Mathieu, Mathieu tweeted that he's "probably not" going to get a new deal in … END_OF_DOCUMENT_TOKEN_TO_BE_REPLACED

KANSAS CITY, Mo. — A manhole left uncovered is the source of concern after a woman damaged her car in Kansas City. The single-car crash happened at 11th Street and Tracy Avenue during the busy … END_OF_DOCUMENT_TOKEN_TO_BE_REPLACED

Kansas City, Missouri's COVID-19 emergency order was set to expire at the end of the month. But Mayor Quinton Lucas made it clear Friday that private businesses can still set their own rules.Any … END_OF_DOCUMENT_TOKEN_TO_BE_REPLACED

KANSAS CITY, MO (KCTV/AP) — All restrictions meant to slow the spread of the coronavirus were being rescinded as of midday Friday in Kansas City, Missouri, following guidance from the U.S. Centers for … END_OF_DOCUMENT_TOKEN_TO_BE_REPLACED