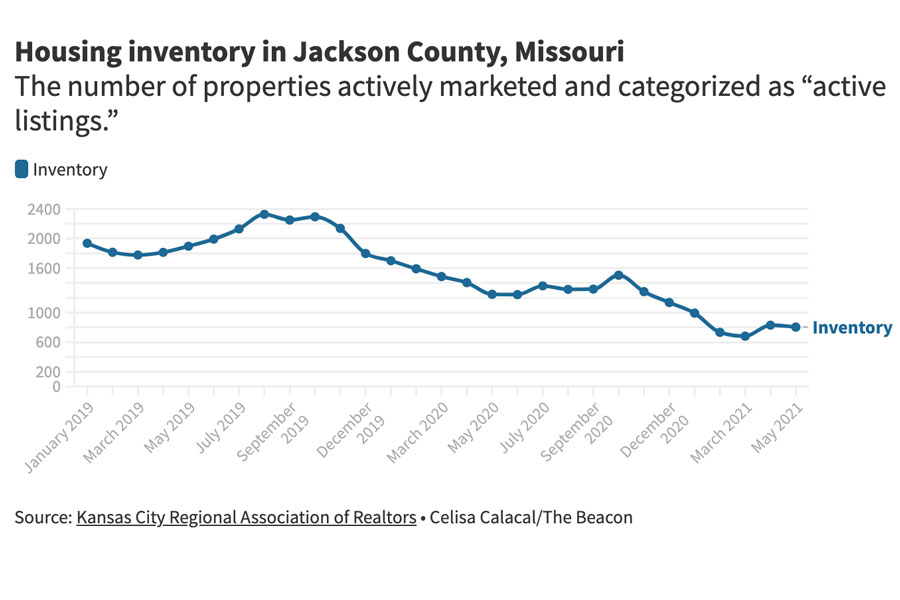 Night after night, Stephanie Murray sits up late in a recliner, searching the internet for help. It’s not her recliner; just one in an Extended Stay America hotel in Overland Park, Kansas. Murray, her husband and two dogs have lived there for 17 months.

At $56.72 a day, she needs charitable assistance to pay the room bill. She also needs help finding an apartment that will accept the federal housing voucher she recently received after a five-year wait.

The pandemic didn’t introduce housing insecurity into Murray’s life. She’s struggled to find a safe, affordable place since at least the Great Recession of 2008.

But, as it did for hundreds of people in the Kansas City region, the pandemic made Murray’s situation worse. And as housing shortages grow more acute, so do health issues and people’s ability to cope.

Murray says her stress level is through the roof, and her husband had a second heart attack in September in the hotel lobby. He has congestive heart failure, and they try to conserve miles on their old car by limiting driving to his various doctor appointments.

Housing in general is difficult to find in Kansas City. Here, and throughout the nation, demand is higher and supply is lower than it’s been in decades.

According to the National Low Income Housing Coalition, Missouri has an extreme deficit of affordable and available homes — the state is short by 122,075 homes. Kansas is short by 44,042. And those calculations are based on 2019 Census data; today’s numbers are likely higher.

During the pandemic, demand for affordable housing far outpaced supply, leaving families like the Murrays in the lurch. The reasons are complex.

Paul Wenkse in one of the houses he’s remodeling for use as an affordable rental. Photo credit Chase Castor/The Beacon.

Wenske spent years studying housing instability in Kansas City, first covering the lead-up to the Recession for the Kansas City Star as a consumer reporter, then working for six years at the Federal Reserve Bank of Kansas City as a community development specialist.

Having spent so much time trying to understand the intricacies, he and his wife, Nancy Meis, decided to be part of the solution. In six years, they’ve bought, rehabbed, and either resold or rented about 30 homes on both sides of the state line.

Murray’s husband helped with Wenske’s rehabs until he was physically unable to work. Like Stephanie Murray, he draws disability pay.

For several years, Murray and her husband, who didn’t wish to be interviewed, lived in a home in Mission, Kansas, where she was a paid caregiver to an older friend. When the man died at the start of the pandemic from a non-COVID-related illness, the couple was left homeless.

“It was quick. We didn’t have anywhere to go,” Murray says.

During the spring of 2020, the Murrays and their two pit bulls slept in their car at various QuikTrips. One night in Merriam, Kansas, just off of Interstate-35, a woman approached them and offered to help.

“She brought us out here, and she says, ‘I’m going to pay for two weeks,” Murray says.

Since then, Murray has paid the daily rate by calling churches and nonprofits as far away as Lake of the Ozarks.

Wenske says the Kansas City region failed to heed the lesson of the Great Recession — that we need more affordable housing.

“What’s happening right now is suddenly, ‘Oh my god, we have this problem,’’ he says. “Well, we had it, and we didn’t solve it, and now we have to.”

He rattles off the familiar list of what led to the subprime meltdown in 2008: fraud, Wall Street greed, inflated appraisals, predatory lending, and carelessness by banks. Inflated appraisals and banks’ willingness to loan to people who couldn’t quite afford their payments led to foreclosures.

“Not only did consumers lose homes, but investors lost homes,” Wenske says. “Let’s say you own 10 homes, and you go into foreclosure. All of those tenants in those houses suddenly lost their home.”

Banks sold off parcels of empty houses on the cheap, often to out-of-state investors who fixed them up and sold or rented them for more than they were worth.

For more than a decade, prices of rentals and home resales have continued to rise. Wenske says they increased by 16% last year. 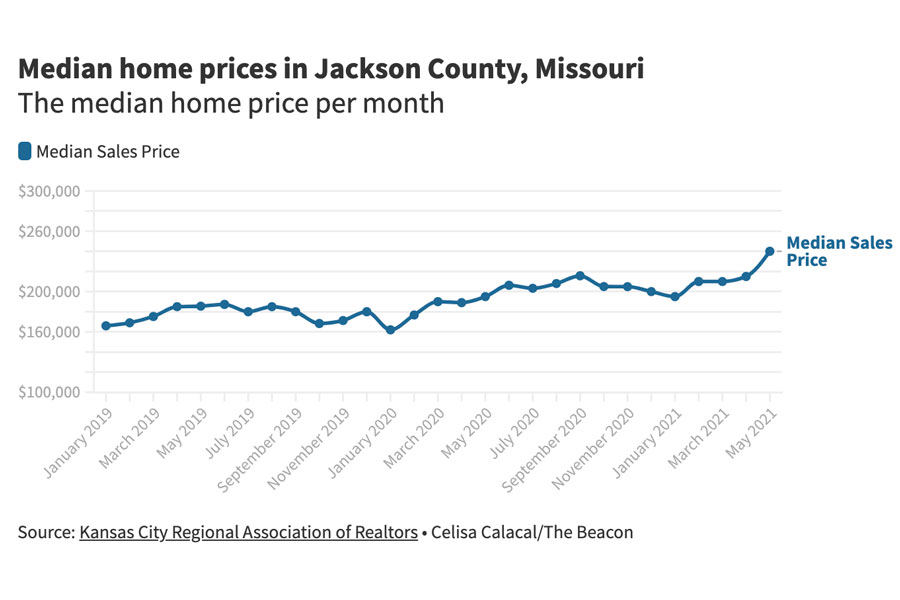 At its worst, unemployment nationwide hit 14.8% in 2020. Renters and homeowners fell behind on payments, and many may never catch up.

“I think there’s a root cause that was kind of aggravated by the pandemic,” Kelly Edmiston says. He was a senior economist at the Federal Reserve Bank of Kansas City for 15 years and is now an assistant professor of population health at the University of Kansas School of Medicine.

After going through a foreclosure, potential buyers have difficulty securing another mortgage, Edmiston says. For many who lost homes in the Recession, “renting was really the only option. Not only did rent go up, but people ended up in poor conditioned places. They were the only ones that were affordable and available.”

“In 2007, there were about 40 affordable and available homes for every 100 extremely low-income renter households, while in 2019 there were 37,” Threet says. “The lowest-income renters struggle because the market never produces enough on its own that is affordable for those renters.”

That doesn’t look like a big decrease, but those are pre-pandemic numbers. 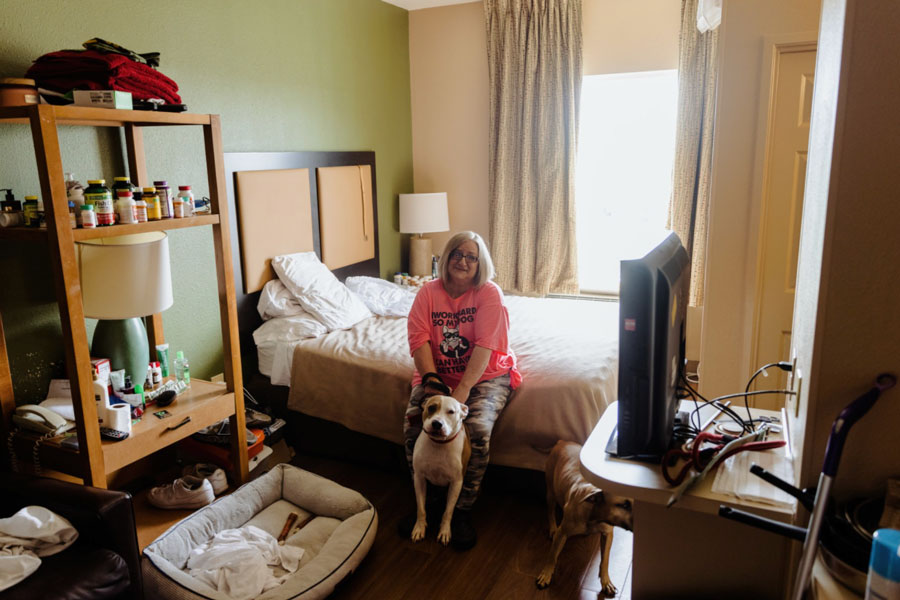 Stephanie Murray sits with her dogs in the room she shares with her husband. They’ve stayed at an Extended Stay America hotel since April 2020, while they look for a place to use their housing voucher. Photo credit Chase Castor/The Beacon.

In 2016, the Murrays applied for a federal housing subsidy. They finally received a Section 8 voucher in April — for a one-bedroom apartment up to $857 a month. But Stephanie Murray explains that the actual rent can’t exceed $700, because it also must cover utilities. She hasn’t found a place for that price yet.

“It’s not just a matter of getting this wonderful voucher,” she says.

In 2018, the City Council approved the creation of a housing trust fund. Wood says it is intended to hold $75 million from sources other than federal or state aid. Possible income streams are sales or property tax, the private sector, or bond financing.

“Those dollars wouldn’t have the federal regulations that would come with them and would give the city a lot more flexibility to do creative financing to create more affordable housing units,” Wood says.

But although the fund exists, no money is going into it. City, community and business leaders have yet to agree on where it should come from.

Tenant advocacy group KC Tenants has announced its own People’s Housing Trust Fund — it wants to fund it with money divested from the police department and developers.

Wenske says sustained partnerships will create more permanent solutions than recent ideas like tiny home communities and sheltering unhoused people in hotel rooms. He sees those ideas as more trendy than sustainable, and they don’t address the root issues.

In the fall of 2018, Wenske started working with the Salvation Army on a sort of pilot program with one of his rental properties.

“They put homeless people in a house, then they pay for the rent,” he says. “And we paid for utilities and all of the upkeep and things like that. It’s worked out really well.”

The partnership feels sustainable to him – and perhaps one of many lessons that Kansas City can put to use as it struggles to get a grip on the crisis of affordable housing.

The project was made possible by a grant from the Robert Wood Johnson Foundation with additional support from INN’s Amplify News Project and the Solutions Journalism Network.

In a since-deleted tweet responding to a question about a potential contract extension for Kansas City Chiefs safety Tyrann Mathieu, Mathieu tweeted that he's "probably not" going to get a new deal in … END_OF_DOCUMENT_TOKEN_TO_BE_REPLACED

KANSAS CITY, Mo. — A manhole left uncovered is the source of concern after a woman damaged her car in Kansas City. The single-car crash happened at 11th Street and Tracy Avenue during the busy … END_OF_DOCUMENT_TOKEN_TO_BE_REPLACED

Kansas City, Missouri's COVID-19 emergency order was set to expire at the end of the month. But Mayor Quinton Lucas made it clear Friday that private businesses can still set their own rules.Any … END_OF_DOCUMENT_TOKEN_TO_BE_REPLACED

KANSAS CITY, MO (KCTV/AP) — All restrictions meant to slow the spread of the coronavirus were being rescinded as of midday Friday in Kansas City, Missouri, following guidance from the U.S. Centers for … END_OF_DOCUMENT_TOKEN_TO_BE_REPLACED