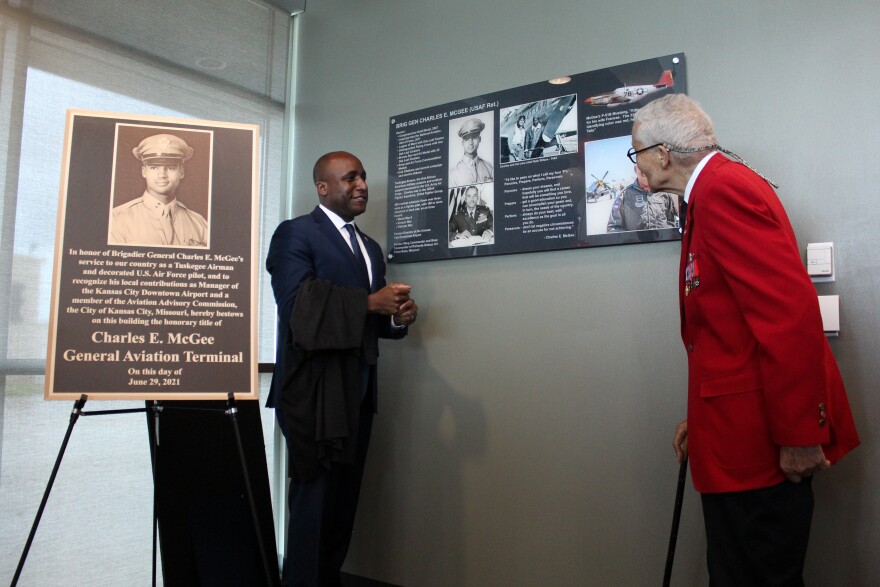 The general aviation terminal at Kansas City’s downtown airport has a new name, in honor of a Tuskegee Airman with connections to the area.

The terminal’s new namesake, 101-year-old Air Force Brig. Gen. Charles McGee, attended the ceremony with friends and family, elected and military officials, and members of the Heart of America chapter of the Tuskegee Airmen.

“It is rare that we get to stand in front of heroes,” Mayor Quinton Lucas said at the ceremony on Tuesday. “As one kid who grew up seeing what you all did, to know that we all can do anything, I say thank you.”

McGee was born in 1919 in Cleveland, Ohio, and, according to his National World War II Museum biography, moved around a lot as a kid. McGee’s love for aviation developed early, and after a stint in the Civilian Conservation Corps and at the University of Illinois, he enlisted in 1942 in the Army Air Forces, which predates the U.S. Air Force.

“As a youngster I learned to treat other people like you want to be treated,” McGee said at the ceremony. “What I’ve accomplished, certainly, I hope, is an inspiration to many.”

As a pilot in the experimental program at the Tuskegee Institute, McGee was among the first African Americans allowed to fly military aircraft. During World War II, he helped escort heavy bombers over targets in German-occupied Europe. The Tuskegee Airmen’s success in the war was considered critical to the eventual racial integration of the U.S. military after the war.

McGee is one of only nine Tuskegee Airmen still living, according to a press release.

He remained in the service until 1973, and flew 409 combat missions in World War II, Korea and Vietnam, more than any other Air Force pilot.

“So a Tuskegee Airman — which in and of itself is amazing,” said Air Force Brig. Gen. Mike Schultz. “Any fighter pilot that successfully flies three conflicts is a fighter pilots’ fighter pilot.”

McGee was stationed at Kansas City’s Richards-Gebaur Air Force Base in the 1950s, and was the first Black commander of the Richard-Gebaur Air Reserve Base. Upon his retirement as a colonel, McGee and his wife Frances chose to return and make Kansas City home. He currently lives in Maryland.

From 1980 to 1982, McGee was manager of the Kansas City Downtown Airport, as it was called at the time, and he later served on the Kansas City Aviation Department’s Aviation Advisory Council.

According to Stars and Stripes, McGee amassed dozens of medals and awards, including two Legions of Merit, three Distinguished Flying Crosses and a Bronze Star Medal. In 2007, President George W. Bush awarded him the Congressional Gold Medal, and in 2011, McGee was inducted into the National Aviation Hall of Fame in Dayton, Ohio. During last year’s State of the Union address, President Donald Trump gave McGee an honorary promotion to brigadier general.

“The recognition of what was accomplished, certainly, I am pleased and proud to receive that recognition and hopefully it will help me carry on as we try to motivate our youth in aviation and space career opportunities,” McGee said at the time.

The airport itself is named for Dr. Charles B. Wheeler, who served in the Navy and Air Force, and was mayor of Kansas City when the facility opened. Its name will remain unchanged.

Along with the renaming, a historical plaque will be placed at the terminal, which sits on the west side of Wheeler Airport, at 925 Lou Holland Drive.

“I hope some of the words here don’t stay in this room,” McGee told the crowd gathered. “What you’ve said needs to be shared with those young folks out there, who are the future of our country.”

In a since-deleted tweet responding to a question about a potential contract extension for Kansas City Chiefs safety Tyrann Mathieu, Mathieu tweeted that he's "probably not" going to get a new deal in … END_OF_DOCUMENT_TOKEN_TO_BE_REPLACED

KANSAS CITY, Mo. — A manhole left uncovered is the source of concern after a woman damaged her car in Kansas City. The single-car crash happened at 11th Street and Tracy Avenue during the busy … END_OF_DOCUMENT_TOKEN_TO_BE_REPLACED

Kansas City, Missouri's COVID-19 emergency order was set to expire at the end of the month. But Mayor Quinton Lucas made it clear Friday that private businesses can still set their own rules.Any … END_OF_DOCUMENT_TOKEN_TO_BE_REPLACED

KANSAS CITY, MO (KCTV/AP) — All restrictions meant to slow the spread of the coronavirus were being rescinded as of midday Friday in Kansas City, Missouri, following guidance from the U.S. Centers for … END_OF_DOCUMENT_TOKEN_TO_BE_REPLACED