Kansas City’s Charlotte Street Foundation, a source of support for the region’s artists, will show off its long-awaited home this weekend with a two-day grand opening.

The foundation provides grants and other supports for visual and performing artists. For more than two decades its studio residencies, art spaces and black box theaters were scattered across the metro.

After completing work on a $10 million new arts campus in Roanoke Park last year, the foundation had to wait some more. Its building sat mostly empty in the pandemic.

Charlotte Street’s founder, David Hughes, says this is a pivotal moment for the foundation.

“While Charlotte Street has had many temporary spaces over time, this permanent home — with almost all the programming based at this hub —will have important impacts for artists, the arts community and the city, as well as of course for Charlotte Street itself,” he says.

Hughes stepped down eight years ago but he says he’s watched the organization grow into a formidable force for local art in the region.

“I think Charlotte Street is doing better today than I ever could have imagined —- and is in so much better shape than when I stepped down,” Hughes says. “They are doing world-class work in support of our community of artists. Now they have a world-class facility.”

The new campus is the result of a $10 million capital campaign to create an anchor for artists and support staff. At more than 20,000 square feet, the campus includes a gallery, a black box theater and studio space for visual and performing artists.

The building, perched among trees above an industrial park, once housed a medical supply company that has since moved to Lenexa, Kansas. Renovations were completed in 2020, but the opening had to be postponed because of the pandemic.

“When we were first working on the space, I used to joke that the model for an artist residency is literally like a cabin in the woods,” says executive artistic director Amy Kligman. “We want artists to be a part of the city. But it’s nice to also have this little bit of a retreat-like setting to come to and make work.” 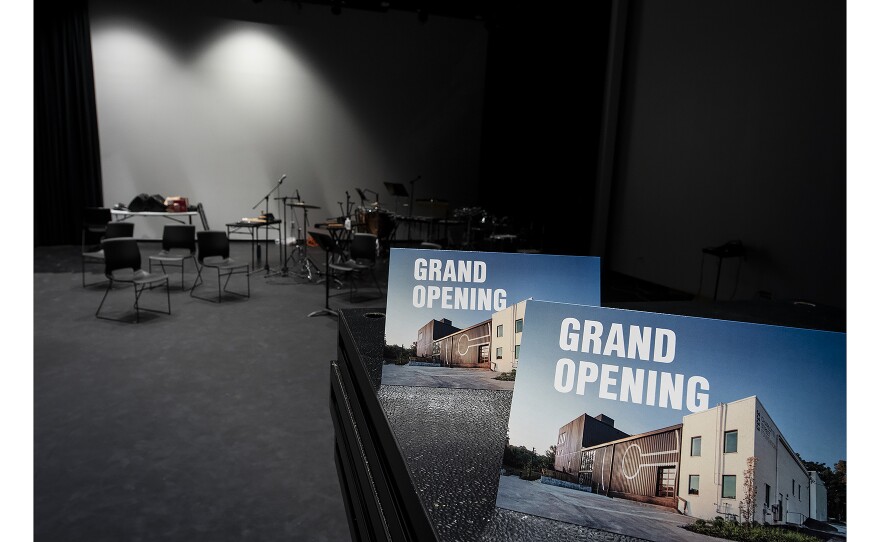 Charlotte Street Foundation is perhaps best known for its unrestricted cash support for artists. Since 1997, it has distributed more than 1.5 million in awards and grants.

While awaiting the opening of its new home, the foundation continued to support artists throughout the pandemic.

“I was a recipient of one of the $1,000 emergency grants, which was a huge help because that was like right when I was struggling with unemployment,” says artist Jillian Youngbird. “So that was a big help that got me through a pretty rough patch.”

Youngbird was at the new headquarters this week, making some final adjustments to her installation piece, “Three Cowboys Walk Into a Bar.” It’s part of a new exhibit on identity that’s called “Who We Were, Who We Are, Who We Will Be.”

“This space blew me away when I first came in,” Youngbird says. “It’s beautiful. This feels like a really nice communal space where everybody can come and participate in art in all types of ways. So I think it’s really cool.” 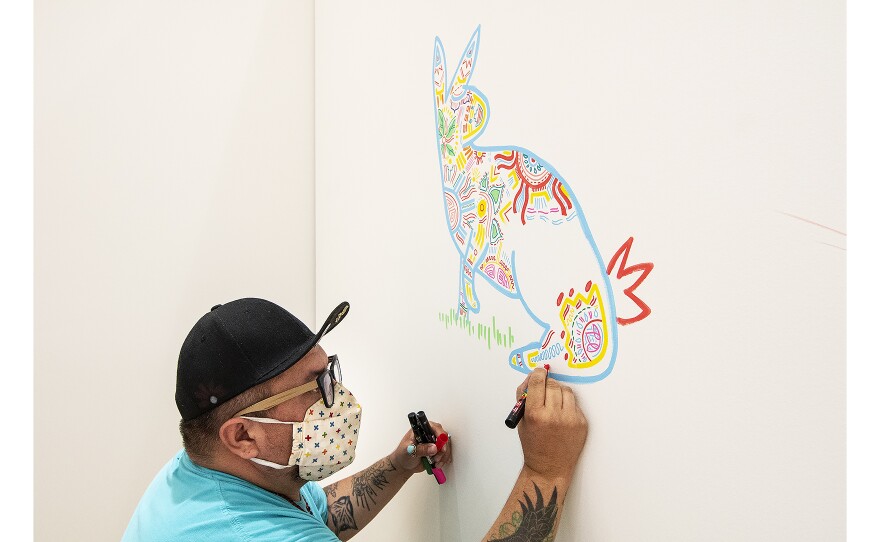 Artist Chico Sierra uses neon-colored markers to create a mural with animal and human figures. The mural “The Further I Am, The More I See” includes moving projections and is part of the group show ‘Who We Were, Who We Are, Who We Will Be.”

Across from Youngbird’s installation, artist Chico Sierra was creating a mural with animal and human figures with neon-colored markers.

“The transformation is nuts, like it’s so crazy,” Sierra says. “I think a lot of things are going to happen here. I mean, a lot of things have slowly started happening, you know, since the pandemic, and it’s a shame that it was empty for so long, but it’s going to change art in Kansas City, you know, like change the experience for artists here.”

After the long wait, Sierra says it’s good to be working among artists again.

Chico Sierra’s mural with moving projections “The Further I Am, The More I See” is part of group show ‘Who We Were, Who We Are, Who We Will Be.”

“Just being here and doing like an installation in this building with other artists who I respect and people that I’ve worked with before, it sort of puts, you know, like it’s some artistic meat on your bones,” Sierra says.

Another exhibit of sculptures and murals is in the works outside in the building’s courtyard. Guest curator Mary Lawson, from The Union For Contemporary Art in Omaha, Nebraska, has embarked on a year-long project designed to reach out to artists of the African diaspora in the Midwest.

Upstairs on the second floor, musician and composer Seth Andrew Davis mixed experimental tracks in one of the performance studios. Davis says he sees the building awakening as more artists come in to work. 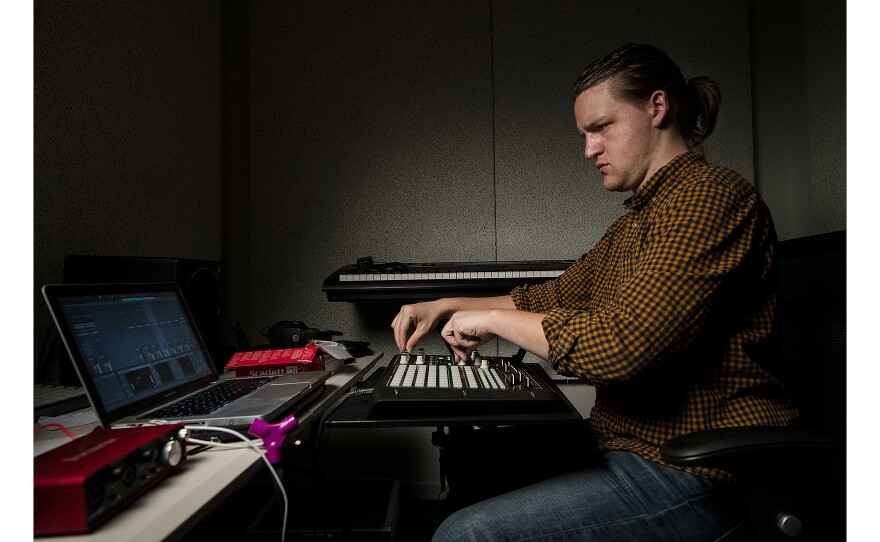 Musician and composer Seth Andrew Davis mixes experimental tracks in one of the performance studios.

“It’s cool to see that it’s all under one roof now and there’s all this other stuff going on at the same time,” Davis says. “I come in and there’s people working in the dance studio. I see my fellow residents upstairs, you know, working in their studios.”

“When people are in the doors, I’m hoping that that is going to be the moment that it finally feels real,” Kligman says. “It’s been a tangible place for a long time now, a long time, like a year. But it still doesn’t feel real.”

In a since-deleted tweet responding to a question about a potential contract extension for Kansas City Chiefs safety Tyrann Mathieu, Mathieu tweeted that he's "probably not" going to get a new deal in … END_OF_DOCUMENT_TOKEN_TO_BE_REPLACED

When the Kansas City Chiefs selected former Tennessee offensive lineman Trey Smith in the sixth-round, the pick was immediately labeled one of the biggest steals of the draft — and rightfully so. The … END_OF_DOCUMENT_TOKEN_TO_BE_REPLACED

KANSAS CITY, Mo. — A manhole left uncovered is the source of concern after a woman damaged her car in Kansas City. The single-car crash happened at 11th Street and Tracy Avenue during the busy … END_OF_DOCUMENT_TOKEN_TO_BE_REPLACED

Kansas City, Missouri's COVID-19 emergency order was set to expire at the end of the month. But Mayor Quinton Lucas made it clear Friday that private businesses can still set their own rules.Any … END_OF_DOCUMENT_TOKEN_TO_BE_REPLACED