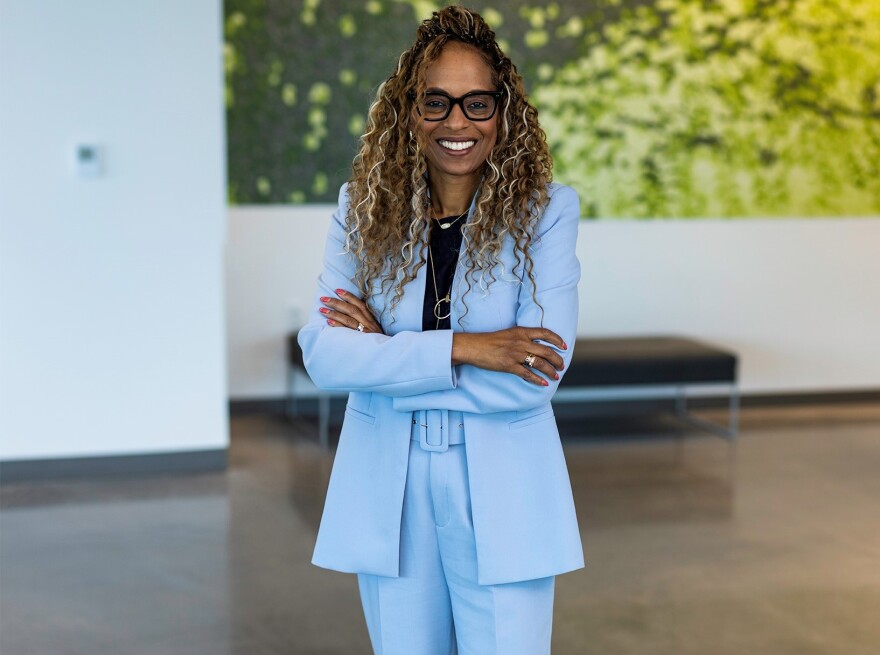 Sandra Stites looks forward to Mother’s Day, a day the women in her family celebrate each other.

On the Saturday before Mother’s Day this year, Stites, her grey Patagonia vest matching her grey, shoulder length braids, joined her 88-year-old mother, her sister, 57, her daughter, 29, and her son’s 25-year old long-time girlfriend for pedicures at the West Plaza Salon.

Sandra Stites (middle) gathered her mother, sister, one of two daughters (the other is workingin Chicago) and her sons long time girlfriend for a Mother’s Day pedicure.

“We have all the women in town, minus our eldest daughter, for pedicures and lady’s lunch,” Stites said, smiling as she perused the line of massaging salon chairs they occupied. “I wouldn’t be anything without my family, zero,” she said.

Stites has been an Ob-Gyn for 30 years, currently with the KC Women’s Clinic Group in Overland Park. It was their mother, Edna Stell, a 1954 graduate of Wiley College in Marshall, Texas, after which she taught elementary school for almost 30 years, who assumed her kids would do well.

“I knew they needed a good education,” she said. “They went to the best schools and they did very well.”

Stites was the first African American to attend the private Barstow School. Her sister soon followed.

Stites went on to Princeton University, UMKC Medical School, and a residency at the University of Rochester.

More women than men have received college degrees over the last several decades, and an increasing number of them have been Black women.

A 2014 study by editors of HBCU Buzz found that Black women were enrolling in college at a higher rate than other races and genders, and data also show that Black women account for more than half of the Black population graduating with postsecondary degrees.

Even as reports identify Black women as the most well educated demographic in the country, they still feel the impact of the intersection of racism and sexism.

A 2020 poll by the Gallup Center on Black Voices found that Black women are more likely than their white or Latina counterparts to feel disrespected, undervalued, or treated unfairly in the workplace.

When we left the nail salon the day before Mother’s Day, I joined the Stites women as they gathered over homemade quiche and fruit salad around the dining room table.

As we talked about the experiences that have shaped their careers, Stites acknowledged she’s accustomed to encountering racism at work.

For example, she said she’ll be talking with a patient when someone delivers a meal and interrupts the conversation, assuming she’s not the doctor.

On another occasion, a white nurse blocked her entry to a hospital floor.

“The OB floors are locked, you need an ID to get in,” she said. “When the nurse was coming out, I was at the door with my ID in my hand. She looked me eye to eye and slammed the door.”

Stites said her heart still races recalling incidents like these.

Professional Black women we spoke with recognized the stereotypes Black Women encounter: Michelle Obama – the terrorist, on the cover of the New Yorker Magazine in 2008, and tennis icon Serena Williams, widely chastised for reacting angrily to a judge , who accused her of cheating in the 2018 U.S. Open.

Christy Pichichero, Professor of History and French at George Mason University and Director of Faculty Diversity in the College of Humanities and Social Sciences, has written extensively about race and culture.

“When we’re just speaking up in a direct way, when an injustice is happening, there is an intimidation factor, like, ‘Oh no, here is an angry Black woman who is out of control, irrational,’” she said. “When the same thing comes from a white man, it would be viewed as authoritative. So, race and gender are bound together in that image.”

In 2013, Essence Magazine asked a group of Black women to keep a diary of media images of themselves. “Negative imagery of Black women is seen twice as often as positive images,” the magazine found.” “Baby Mamas, angry Black women, unhealthy Black women and uneducated sisters.”

Michelle Wimes has held a number of high-level positions in Kansas City, including partner at prestigious law firms and board work for many non-profits. She was recently appointed Senior Vice President and Chief Equity and Inclusion Officer at Children’s Mercy

Some of these images have been imposed on Michelle Wimes, 54.

Years ago, as a new Black lawyer at a large Kansas City law firm, she conformed to the standard for women lawyers, mostly white, who came to work in the black or grey suit, bow tie and pumps.

She just watched as the white men she shared an office with had access to mentorship no one afforded her.

She said it took years to gain enough confidence to speak up. “I said, ‘I want to go to depositions, to shadow trials, to go to lunch with Senior partners'” sharing her story. “I proactively sought those experiences and I don’t know if I’d have had the moxy to do that if I didn’t see (them) getting to.”

She started to change her workplace appearance.

“What that looked like was being comfortable wearing braids … not showing up like I needed to press or relax my hair,” she said. “I could wear colors, be vibrant, you know, just be who I was.”

Myles Durkee, professor of Psychology at the University of Michigan, researches ways in which Black professionals feel the need to change in order to fit in at work, commonly known as code-switching.

The results of his studies revealed contradictions. For example, he found that both Black and white respondents believed Black professionals cannot speak the way they do with other Black people if they want to be respected in a majority white workplace.

But when he looked at gender demographics, he found disagreement on the issue of hair styles. White women said they thought it was unprofessional for Black women to wear natural hairstyles to work.

“That’s where a lot of racial stereotypes came into play,” he said. “When we asked white women specifically, why did they feel that way about natural hair … they associated natural hair with nappy, kinky, ungroomed, etc.”

While all the Black women I spoke with said stereotypes affected their experience at work, it’s impossible to generalize among any demographic group. 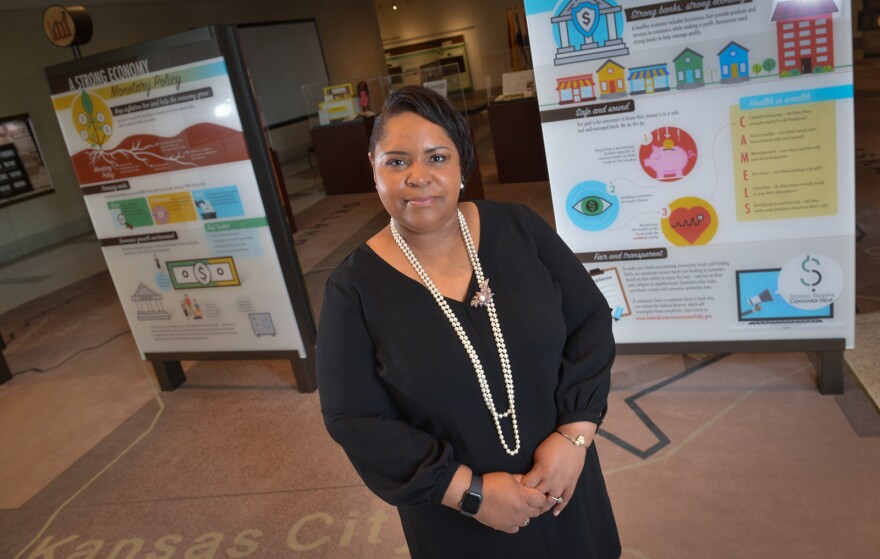 Porcia Block grew up with a single mother who didn’t graduate from high school. She says her success came from “taking bits and pieces” of everything around her – mentors, spirituality, colleagues.

Porcia Block, 45, who was promoted earlier this year to Senior Vice President and State Auditor at the Federal Reserve Bank of Kansas City, felt the impact of her race and gender as pressure to perform.

“I’d often find myself being the only Black woman in the room,” she said. “I always felt I really needed to bring my ‘A’ game.”

She said mentors, Black and white, were key to her success. She plans to play a similar role for young Black women interested in her field.

“You want to ensure the door remains open to others,” Block said. “You’re not only on your own path, but you have to be thinking ‘how do I set in motion opportunities for others to come through?’” 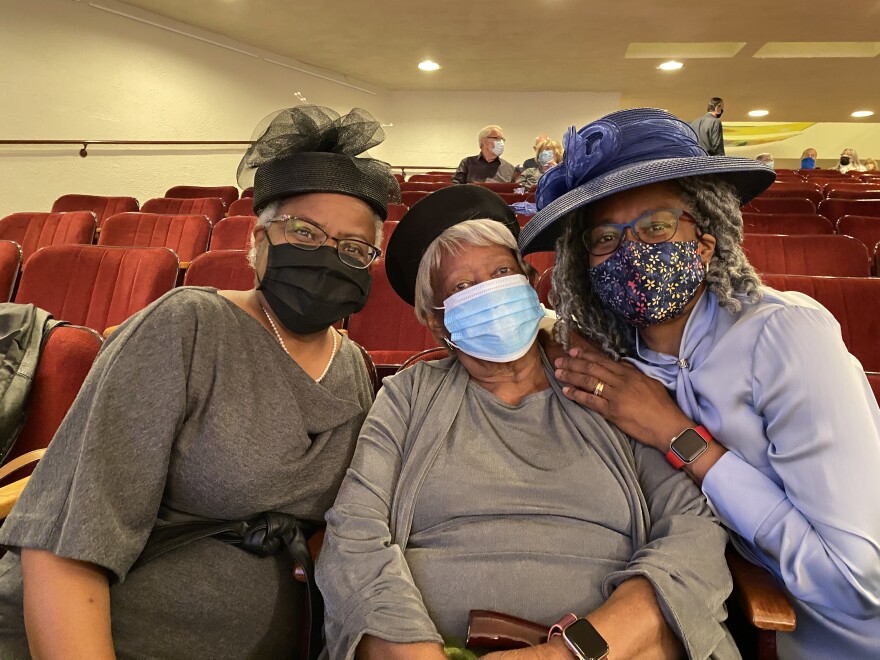 The grown Stites children share this sense of responsibility that comes with opportunity and success.

Sierra and Ailea Stites, the elder two, have both made career choices that address systemic racism in public health.

At one point in our conversation, I asked how they see racism manifesting itself at work.

“It’s implicit,” Sierra and her mother responded right away, simultaneously. “If you weren’t a white reporter, you’d say, ‘Yeah, of course, I get it,” Sierra said.

Being a Black professional women is a daily, sometimes exhausting experience.

Sandra Stites and her family ended their Mother’s Day weekend gathering on Sunday at Community Christian Church on the Plaza. It was the first in-person service since the beginning of the pandemic.

All the women were in elegant Sunday hats, another family Mother’s Day tradition. It was not one seen imitated among the mostly white congregation. 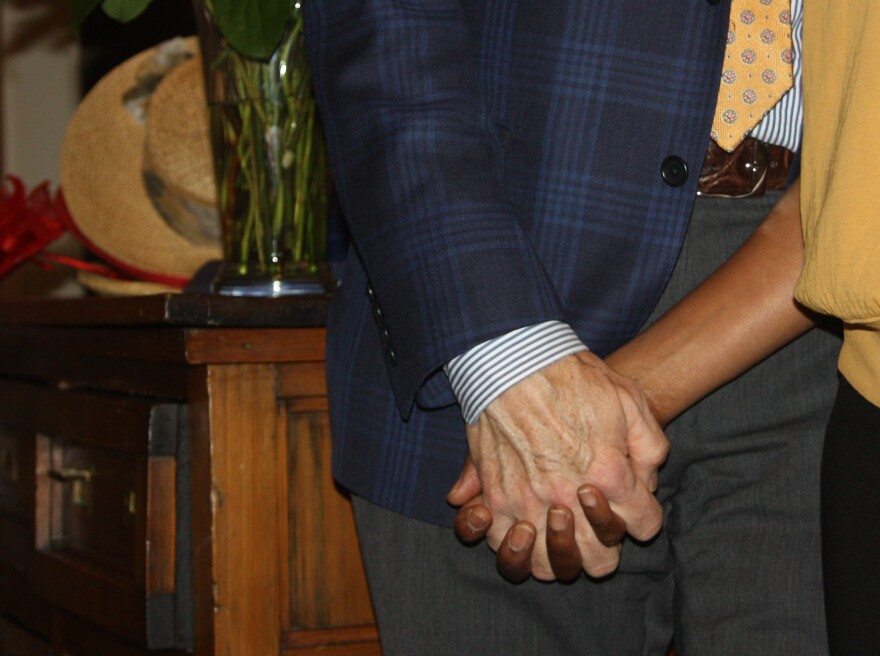 The Dr.s Stites got pushback from familiy and friends early in their relationship. Today, their families love them both and they have many close friends. When travelling, they ask if business owners can accept an interracial couple when making researvations in some parts of the country, like southern Missouri. Sometimes they’re told no.

Stites stands out for another reason. Her husband, Dr. Stephen Stites, is white.

Studies show the number of mixed marriages of Black and white Americans has increased dramatically in the last 50 years. But Sandra and Stephen still knew they’d face challenges as an interracial couple.

“We knew we had to be better than just a couple that loved each other a bunch,” Sandra said. “We knew it was going to be hard, especially for kids.”

Stephen Stites says their shared values: family, work, faith, and a love of the outdoors would sustain them. As for how others saw them, the common good they see in most people will prevail.

“Love trumps hate,“ he says. “What you have to do is make sure you try to do good things, and I think that sends a very powerful message to everybody.”

Under the Radar: Recognizing Black Excellence is a KCUR series aimed at countering the pervasive negative images of African Americans by showcasing Black success stories in Kansas City.

In a since-deleted tweet responding to a question about a potential contract extension for Kansas City Chiefs safety Tyrann Mathieu, Mathieu tweeted that he's "probably not" going to get a new deal in … END_OF_DOCUMENT_TOKEN_TO_BE_REPLACED

KANSAS CITY, Mo. — A manhole left uncovered is the source of concern after a woman damaged her car in Kansas City. The single-car crash happened at 11th Street and Tracy Avenue during the busy … END_OF_DOCUMENT_TOKEN_TO_BE_REPLACED

Kansas City, Missouri's COVID-19 emergency order was set to expire at the end of the month. But Mayor Quinton Lucas made it clear Friday that private businesses can still set their own rules.Any … END_OF_DOCUMENT_TOKEN_TO_BE_REPLACED

KANSAS CITY, MO (KCTV/AP) — All restrictions meant to slow the spread of the coronavirus were being rescinded as of midday Friday in Kansas City, Missouri, following guidance from the U.S. Centers for … END_OF_DOCUMENT_TOKEN_TO_BE_REPLACED