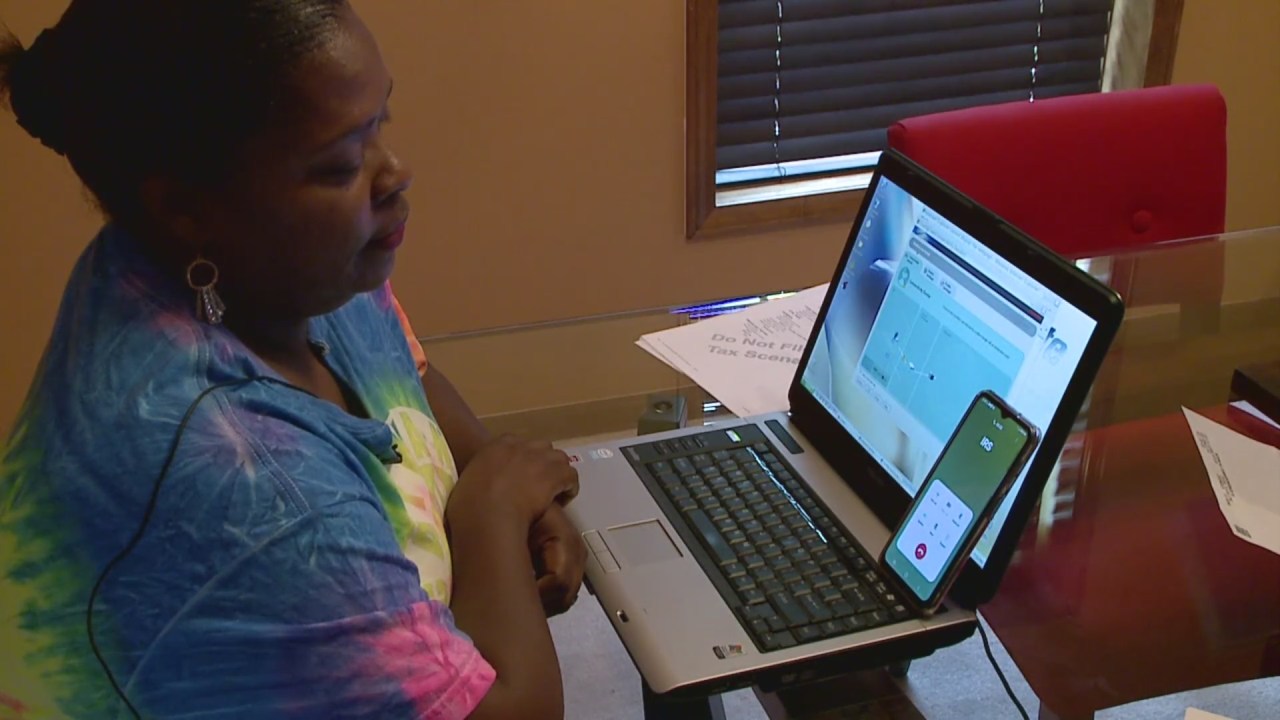 KANSAS CITY, Mo. — Jonesther Michelle Lewis-Russell dialed the number to the IRS for the 12th time in a week. Waiting on hold with the IRS has become a big part of her day.

“They usually say something about heavy call volume,” Lewis-Russell said as telephone-hold music began to play.

Each call can take 3-4 hours. Despite Lewis-Russell’s persistence, she still hasn’t reached anyone who can solve her problem. It’s a problem that began two months ago when she was trying to apply for a special IRS pin that would allow her to become a tax preparer. She kept being denied access to a pin.

To try and figure out what was wrong, Lewis-Russell dug into her own IRS online tax file. That’s when she found a document, filled out by someone at the IRS, which didn’t have her name listed correctly.

Someone at the IRS had changed her name from Jonesther Michelle Lewis-Russell to J Lewis Russ. The IRS gave her a phone number to call to solve the problem.

“So I called them several times, but they said they couldn’t do anything for me,” Lewis-Russell said.

She decided to pay a visit to the IRS office at Kansas City’s Union Station. She thought if she made an appointment to show up in person, she’d have a better chance of proving to the IRS who she really is.

“I took my driver’s license, my Social Security card, my last year’s taxes, my birth certificate and my passport,” she said.

But no one at the IRS in Union Station could help her. Instead they gave her a new number to call.

She went upstairs to get a better signal and dialed the number. It directed her back to the same number she’d already been dialing for weeks. You know, the number where she had spent hours on hold and no one could help her.

“So I went back downstairs (to the IRS office), and they said you have to have a new appointment to see them because my appointment time was over,” she said.

Getting a new appointment would take another two weeks.

Worried that she would spend the rest of her life in what was quickly becoming a Monty Python sketch, she called FOX4 Problem Solvers for help.

We asked her to call the IRS one more time, just so we could get video of her on the phone. Here’s the good news: An hour later, she actually reached someone who – finally – was able to solve her problem.

That IRS customer service agent told her that her hyphenated name was too long (although she’d been using it to file taxes for 20 years). They asked her to choose an abbreviated version of her name.

She did. Problem solved.

In a since-deleted tweet responding to a question about a potential contract extension for Kansas City Chiefs safety Tyrann Mathieu, Mathieu tweeted that he's "probably not" going to get a new deal in … END_OF_DOCUMENT_TOKEN_TO_BE_REPLACED

KANSAS CITY, Mo. — A manhole left uncovered is the source of concern after a woman damaged her car in Kansas City. The single-car crash happened at 11th Street and Tracy Avenue during the busy … END_OF_DOCUMENT_TOKEN_TO_BE_REPLACED

Kansas City, Missouri's COVID-19 emergency order was set to expire at the end of the month. But Mayor Quinton Lucas made it clear Friday that private businesses can still set their own rules.Any … END_OF_DOCUMENT_TOKEN_TO_BE_REPLACED

KANSAS CITY, MO (KCTV/AP) — All restrictions meant to slow the spread of the coronavirus were being rescinded as of midday Friday in Kansas City, Missouri, following guidance from the U.S. Centers for … END_OF_DOCUMENT_TOKEN_TO_BE_REPLACED