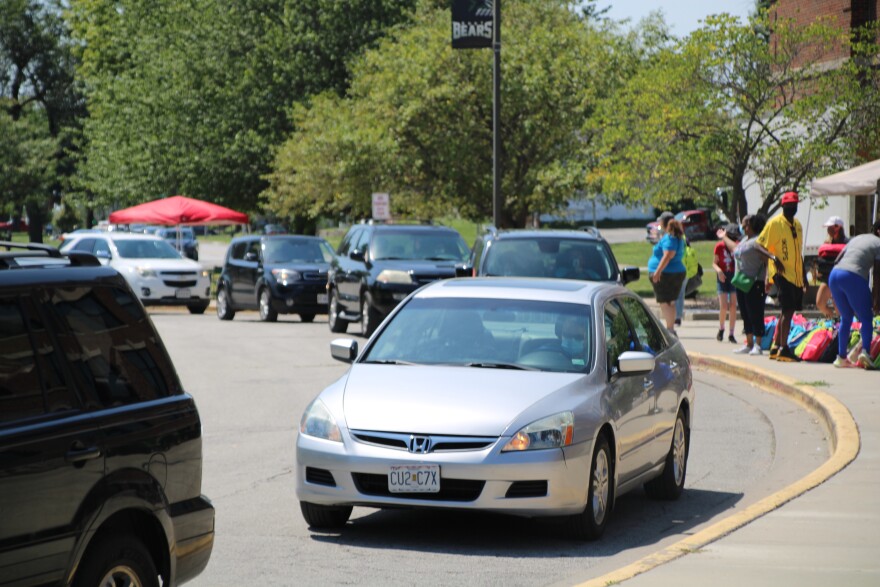 At its fifth annual Summerfest, the Kansas City Public Schools distributed backpacks filled with school supplies and offered health services to families in the district. Like last year’s event, it was a drive-through format to mitigate the spread of coronavirus.

Superintendent Mark Bedell said the parents he met were excited about sending their kids to in-person school this year.

A volunteer at KCPS’ Summerfest gives a family a backpack through a truck window.

He said one parent told him she was relieved by the end of online classes because she’d had to stay home with her five children during the school day, which kept her from going to work. Even in March, when school took place in-person some days, working parents still needed to take time off, he said.

March’s hybrid format was, according to Bedell, a “beta test” for how to conduct in-person school during the pandemic. The district also put 2,300 students through summer school but only saw one student test positive for COVID-19, a case that Bedell said happened off campus.

Bedell said he expected that level of safety to continue with the entire student population back in school.

“We think we’re going to be fine,” Bedell said. “There’s a number of school districts that had kids in full-time around the country last year that did well.”

Bedell said those school districts will serve as the “blueprint” for KCPS’ upcoming year. Additionally, KCPS is the first district in the area to require vaccinations of staff.

More than 2,500 vehicles were registered for Summerfest but even more showed up, according to a spokesperson for the Kansas City Public Schools.

Summerfest drew thousands of parents who took advantage of free school supplies, immunization clinics, physicals and COVID-19 vaccinations. Just around 2,500 people registered for the event, but many unregistered families pulled up to get backpacks too, said KCPS spokeswoman Elle Moxley.

Charlotte Lane, who was there with her two grandchildren, said she was excited to finally get back to in-person school.

“I can’t wait for the bus to roll up and for them to get on it, and then come back home at three o’clock,” Lane said.

Lane, who is retired, said she’d had the kids a lot over the past two years. She said it was difficult for the family to attend school at home, but she tried to help the kids with homework while her daughter was at work.

“The math is not like it used to be when I was in school,” Lane said, referring to the Common Core mathematics curriculum.

“In our case, the older child was able to help the younger one, but you had to wait in between classes and break periods,” she said. “So it was really frustrating.”

Another parent, Mary Amador, said she was also excited for her two kids to start the year.

“I know that they need to go back, go back to school and start getting back to some normal,” she said. 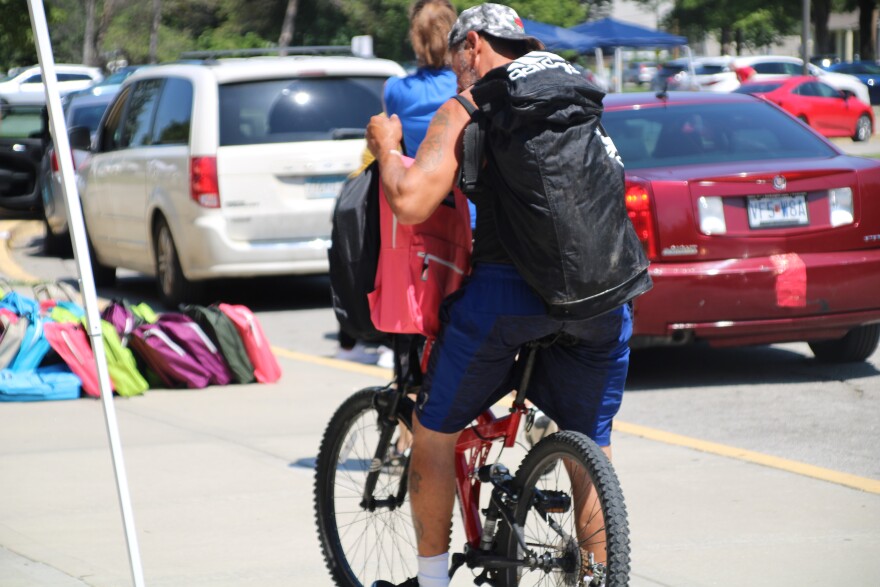 One family member rode a bicycle to pick up two backpacks of school supplies.

Margo Quiriconi, director of Community Health Initiatives at Children’s Mercy, said the best part of Summerfest is the outreach — getting to serve more members of the community than they usually do.

“We’ve seen a number of kids that haven’t been to their provider for the American Academy of Pediatrics-suggested visits, and some are behind in their immunizations,” Quiriconi said.

“We know it’s been so difficult for families,” she said. “We want to surround them with the type of services and expertise they need, so that we can get kids back into school healthy and strong.”

Bedell said having health services makes Summerfest a “one-stop shop” for families, especially those that have suffered economic loss from the pandemic.

“If we can take the burden off by working with a lot of the different funding entities here,” Bedell said, “we think we do accomplish some of the equity goals that we have.”

If you have actually thought of coming to be a qualified nursing assistant, but do not know if it corrects for you, the following list of main reasons to get into nursing might aid you make a … END_OF_DOCUMENT_TOKEN_TO_BE_REPLACED

In a since-deleted tweet responding to a question about a potential contract extension for Kansas City Chiefs safety Tyrann Mathieu, Mathieu tweeted that he's "probably not" going to get a new deal in … END_OF_DOCUMENT_TOKEN_TO_BE_REPLACED

KANSAS CITY, Mo. — A manhole left uncovered is the source of concern after a woman damaged her car in Kansas City. The single-car crash happened at 11th Street and Tracy Avenue during the busy … END_OF_DOCUMENT_TOKEN_TO_BE_REPLACED

Kansas City, Missouri's COVID-19 emergency order was set to expire at the end of the month. But Mayor Quinton Lucas made it clear Friday that private businesses can still set their own rules.Any … END_OF_DOCUMENT_TOKEN_TO_BE_REPLACED