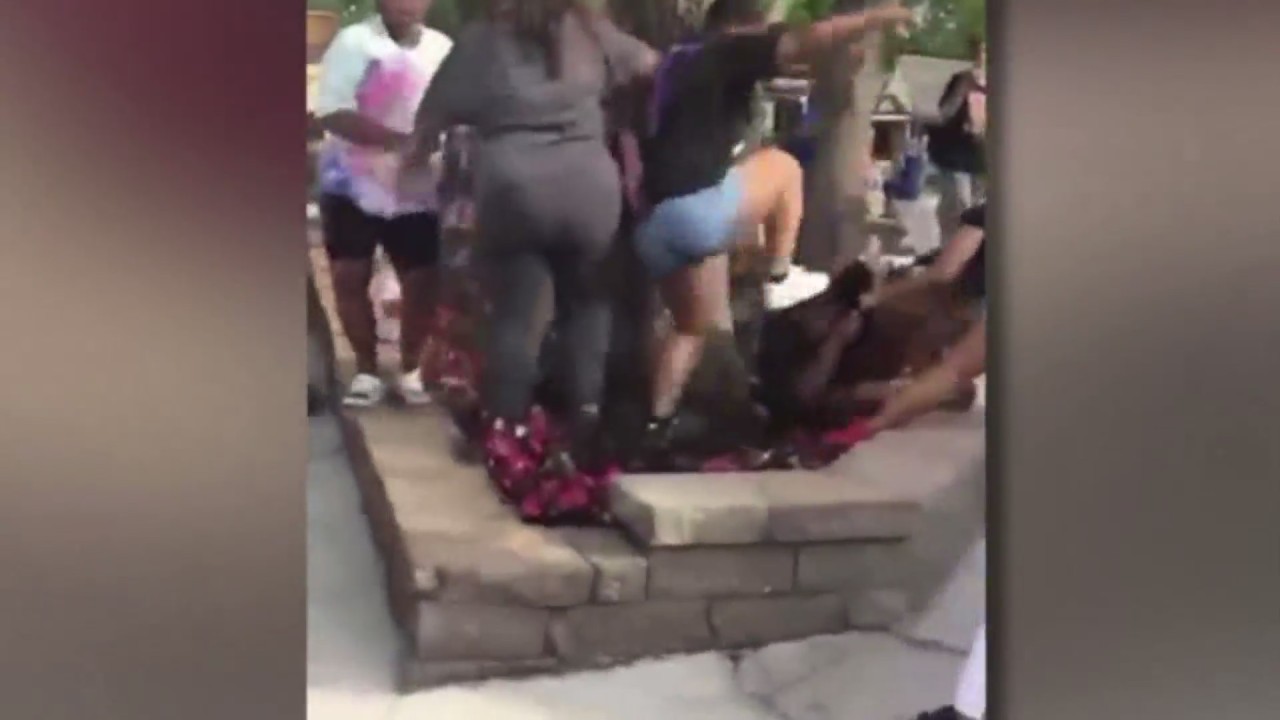 KANSAS CITY, Mo. — An attack at Worlds of Fun has some parents questioning if it’s safe to go back to the Kansas City amusement park.

Twelve-year-old cousins were attacked by what their parents described as a gang of girls. Their moms are demanding justice. They said the girls who attacked their daughters will do it again.

It was all caught on camera, and now, Kansas City police are investigating.

It was heartbreaking for Chaunell and Chauntell Tillman to watch the video taken Saturday of their daughters being attacked by girls they don’t know.

“She’s just defenseless. She did everything she could,” Chaunell Tillman said. “She was definitely defending herself on the ground. So I felt like life left my body at that moment. I felt like my soul left because my job as a parent is to protect my child and I wasn’t there to do that.”

On what should have been a fun-filled day with their grandmother, Chaunell and Chauntell’s daughters left Worlds of Fun battered and bruised. The Tillman sisters found out about it all during a tearful FaceTime from their girls, who said they had been jumped.

“And her face was all swollen, red, and it was like cuts on her, scratched up on her arms and her legs,” Chauntell Tillman said. “I was just livid. Like oh my, I just could believe it.”

The girls got checked out at Children’s Mercy Hospital for injuries like mild concussions, cuts and bruises.

The moms said the attack lasted 6 minutes. They’re upset Worlds of Fun security didn’t step in to stop it.

“For three minutes she stood up getting punched in the head. Three minutes she got kicked in her face and her head, so I’m very blessed to say that she is still here,” Chaunell Tillman said.

In a statement, Worlds of Fun confirmed the incident happened, saying:

It was a woman in gray who got in between the girls, even taking a few hits herself, who finally broke up the brawl.

“Black people stood around and was recording it and watching them, laughing,” Chaunell Tillman said. “A white woman saved my child’s life, and I thank her. And I hope she is watching this today, and I hope that I see her in court so I can give her a hug.”

These moms said their girls are carrying trauma no 12-year-olds ever should. They’re not sure if they’ll ever go back to the amusement park.

The Tillman sister said the girls who attacked the two cousins were 13-17 years old, and they won’t stop seeking justice until they’re criminally charged.

In a since-deleted tweet responding to a question about a potential contract extension for Kansas City Chiefs safety Tyrann Mathieu, Mathieu tweeted that he's "probably not" going to get a new deal in … END_OF_DOCUMENT_TOKEN_TO_BE_REPLACED

KANSAS CITY, Mo. — A manhole left uncovered is the source of concern after a woman damaged her car in Kansas City. The single-car crash happened at 11th Street and Tracy Avenue during the busy … END_OF_DOCUMENT_TOKEN_TO_BE_REPLACED

Kansas City, Missouri's COVID-19 emergency order was set to expire at the end of the month. But Mayor Quinton Lucas made it clear Friday that private businesses can still set their own rules.Any … END_OF_DOCUMENT_TOKEN_TO_BE_REPLACED

KANSAS CITY, MO (KCTV/AP) — All restrictions meant to slow the spread of the coronavirus were being rescinded as of midday Friday in Kansas City, Missouri, following guidance from the U.S. Centers for … END_OF_DOCUMENT_TOKEN_TO_BE_REPLACED