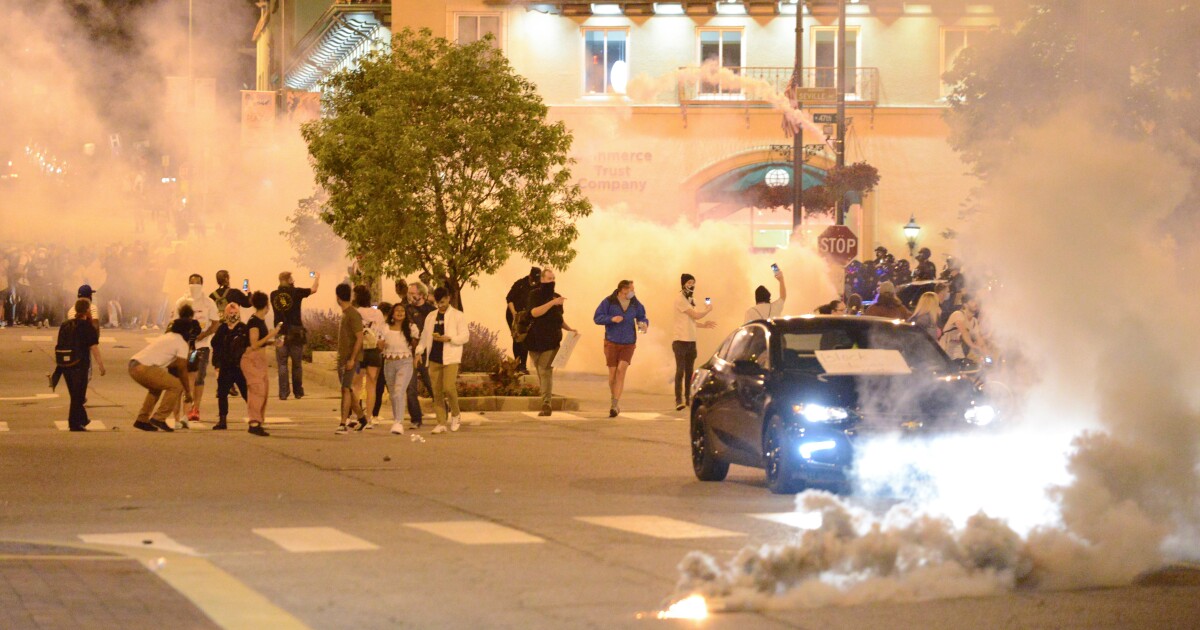 On June 3, 2020, with Kansas City reeling after a weekend of violent protests reacting to the killing of George Floyd, a coalition of civil rights groups went public with something they had been discussing for a while.

An emotional Gwen Grant, president and CEO of the Urban League of Greater Kansas City, looked into the camera during a press conference broadcast on Facebook Live, and said the city and the world was at a tipping point.

“To our protesters I say: Fear not! Use your voice, exercise your self-discipline in your fight for justice,” she said. “Do not be deterred until we see the change that is necessary for us to move forward. The time for change is now.”

But a year and a half later, the protesters are silent, Smith is still chief and the state remains in control of the department under the auspices of the Kansas City Board of Police Commissioners.

Two other efforts at reform have also failed to change anything, including Mayor Quinton Lucas’s plan to reallocate some of the police budget and a highly anticipated report from two leading business groups on police governance, which did not recommend a move to city control.

Grant, who has filed a lawsuit focused on police department spending, said she’s been disappointed that these efforts by city leaders haven’t brought about any change.

“If Black lives really matter, why then are you not stepping up in ways to dismantle the system that consistently oppresses Black people?” she said in a recent interview. “Law enforcement, economics, housing, the urban core, the infrastructure. Why are you not using your power and your resources to truly change the environment in which we live?”

“Any change in the system of governance would have to come from the state legislature,” KCPD spokeswoman Donna Drake said when asked for comment on seeking local control for Kansas City.

Last April, KCPD announced a host of reforms, including purchasing body cameras for officers and independent investigations of shootings by officers.

“The KCPD heard the calls for change from the community and has made substantive reforms in response,” a KCPD statement said.

In the past, rank-and-file officers have been against giving up state control of the department to the city. Brad Lemon, president of the local Fraternal Order of Police, Lodge 99, did not return calls seeking comment for this story.

On Nov. 16, City Councilwoman Melissa Robinson, who represents central and east Kansas City, opened the monthly Board of Police Commissioners meeting with a bang.

“I’m not particularly excited to talk about elephants in the room,” she said, “but the reality of it is, the city of Kansas City and our police department, we are in a dysfunctional relationship.”

That’s an often-heard refrain — especially from communities of color — about a police department whose creation is a relic of the Civil War.

“The state of Missouri seized control of the police departments in Kansas City and St. Louis during the Civil War,” said Richard Rosenfeld, a University of Missouri-St. Louis professor emeritus of criminology. “And that was, among other things, to gain control over the weapons arsenals that were located in the two cities.”

Although Kansas City approved a home-rule ordinance in 1932, by 1939 the police department was so corrupt under political boss Tom Pendergast that the Missouri governor returned the department to state control under commissioners that he appointed.

The issue of local control has been discussed for years, but reached a head in 2013 when St. Louis won the right to its own police force after voters approved a statewide ballot measure. That’s also the year a task force created by then-Kansas City Mayor Sly James narrowly declined to pursue moving toward local control.

Rosenfeld said he’s never been sure just why Kansas City has opted to stick with state control. The Missouri Legislature has refused to allow its two largest cities to gain control of their own police departments because of ongoing distrust between rural and urban lawmakers, he said.

Race is also a factor in the reluctance for the state to give up reins of the city departments, Rosenfeld said.

“I don’t think it’s sheer coincidence that the large majority of the Black population in Missouri resides in St. Louis and Kansas City,” he said. “I think there’s no question that race plays a major role.”

Eight years after St. Louis moved to local control, there has been no significant change in day-to-day policing, which Kansas City officials should study, Rosenfeld said.

Gwen Grant, president and CEO of the Urban League of Greater Kansas City, in a Facebook Live press conference on June 3, 2020, calling for the firing of Kansas City Police Chief Rick Smith and for removal of state control of the police force.

The Urban League’s police accountability task force talks about a statewide ballot initiative that would ask voters to approve giving control of the department back to the city, Grant said. But she said the campaign would cost roughly $3.5 million they don’t have, and she admitted that the idea doesn’t have much momentum.

St. Louis’ campaign for local control was bankrolled by multi-millionaire Rex Sinquefield. It was criticized by the ACLU, among others, for not including a Civilian Review Board nor access to police disciplinary records.

In July, after months of study and listening sessions, the Greater Kansas City Chamber of Commerce and the Civic Council of Greater Kansas City presented a report that found “broad dissatisfaction” with the current process of investigating officer misconduct cases and complaints from the public about officers and KCPD leadership.

The report was a response to the previous summer’s protests and to the city’s high rate of violent crime, as well as a recognition that “public safety is a critical component to creating inclusive economic growth for our region,” Civic Council Board Chair Steve Edwards said when the report was released.

One of the report’s recommendations said the city and the Board of Police Commissioners should “engage in dialogue — rather than litigation — to find common ground regarding the department’s current budget and other contentious issues.” But the report did not recommend moving to the police force to the city’s control.

The chamber’s report “fell flat” in the Black community, Grant said, adding she was “extremely disappointed” in it. The report sidestepped an opportunity to truly address public safety and have an impact on rebuilding and restoring community trust, she said.

Although she wouldn’t comment on it, Grant’s next concern will be the lawsuit she filed in Jackson County Court. In September, Grant sued the Kansas City Board of Police Commissioners, saying the board is violating taxpayers’ and African-Americans’ rights.

Grant cited Missouri’s Hancock Amendment, approved by voters in 1980, which limits taxing and spending and can only be used by taxpayers.

“This case is about taxation without representation,” the lawsuit states.

Pending, too, is the July call from a coalition of civil rights groups for the U.S. Department of Justice to step in and investigate KCPD, an effort supported by Jackson County Prosecutor Jean Peters Baker. Baker said KCPD has “no accountability to our community.”

In a since-deleted tweet responding to a question about a potential contract extension for Kansas City Chiefs safety Tyrann Mathieu, Mathieu tweeted that he's "probably not" going to get a new deal in … END_OF_DOCUMENT_TOKEN_TO_BE_REPLACED

KANSAS CITY, Mo. — A manhole left uncovered is the source of concern after a woman damaged her car in Kansas City. The single-car crash happened at 11th Street and Tracy Avenue during the busy … END_OF_DOCUMENT_TOKEN_TO_BE_REPLACED

Kansas City, Missouri's COVID-19 emergency order was set to expire at the end of the month. But Mayor Quinton Lucas made it clear Friday that private businesses can still set their own rules.Any … END_OF_DOCUMENT_TOKEN_TO_BE_REPLACED

KANSAS CITY, MO (KCTV/AP) — All restrictions meant to slow the spread of the coronavirus were being rescinded as of midday Friday in Kansas City, Missouri, following guidance from the U.S. Centers for … END_OF_DOCUMENT_TOKEN_TO_BE_REPLACED