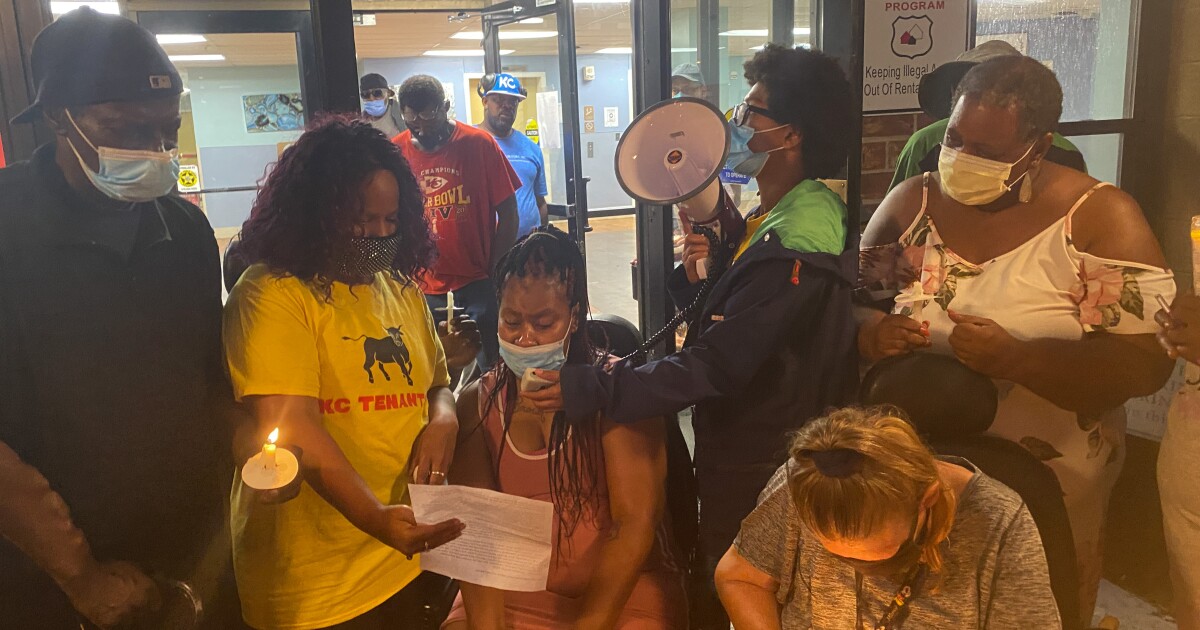 Neighbors and housing activists held a candlelit vigil Thursday night to honor Jessie Bey, who they said died from unsafe conditions at his apartment building.

KC Tenants, a local housing advocacy group, said in a press release that Bey was “robbed and left for dead” in his apartment at Gabriel Tower Apartments.

The Kansas City Police Department said there is no ongoing investigation into the death and that Bey died after being taken to the hospital on Aug. 6. A spokesperson said the department would have been notified by the hospital or medical examiner if there were indications of foul play or trauma.

The Gabriel Tower Tenants Union says Bey’s death was preventable and a result of a lack of security at the complex.

“If he could’ve got some help sooner, if security monitored some cameras around here or something, then they could have seen somebody in his apartment, whoever went in and robbed him or whatever,” said James “Pappy” Stone, president of the Gabriel Tower Tenants Union. “Somebody could have got some help for him then maybe he might still be here.”

For more than a year, the union has been organizing against Millennia Companies, an Ohio-based housing corporation that owns Gabriel Tower and other properties in Kansas City.

Millennia Companies did not provide comment on the circumstances surrounding Bey’s death. A Millennia spokesperson provided a general statement on its security policies, not in connection with Bey’s death, stating that there are frequent patrols at the apartment complex from an onsite security officer.

The union claims they do not see frequent patrolling at the apartment and that people are allowed to enter and leave the building unchecked, making tenants feel unsafe.

Stone said he was not sure of the circumstances regarding Bey’s death and that rumors began to spread and the lack of security only added to the confusion. He said Bey’s daughters confirmed that there was a robbery.

“If we had security or management who would communicate with us, we wouldn’t have to wonder about this. We wouldn’t have to run around here scared thinking that maybe there’s a killer on the loose or something,” Stone said.

Neighbors of Jessie Bey gathered at Gabriel Tower Apartments to hold a candle vigil in his honor.

The group has also accused the corporation of neglecting its residents, who primarily are elderly or have disabilities. Tenants raised concerns earlier this year about rodents and pests, a lack of air conditioning and unsafe levels of mold at the apartment building.

The group claims Bey is not the first tenant at Gabriel Tower whose death was caused by the unsafe housing conditions and that some residents are now “terrified” to leave their apartments.

“We are all tenants who are elderly and/or have some kind of disability. We are not able to secure the building ourselves and are left to the wolves by Millennia,” Charisse Crawford, the union’s vice president, read in a statement at the vigil.

Crawford said the union is demanding the company require security to monitor doors, check people in and out, and check IDs. They also asked for a way to contact security and for 24/7 monitoring.

Secretary of Housing and Urban Development Marcia Fudge agreed to launch a full investigation this summer into Millennia Companies after pressure from the union. The group later claimed that the department had scaled back its investigation.

In response to the union’s claims of the building’s poor conditions, a Millennia spokesperson said the company has “satisfactorily complied” with all local and HUD inspections and plans to conduct a “substantial rehabilitation” of the building through the Low Income-Housing Tax Credit program.

In a since-deleted tweet responding to a question about a potential contract extension for Kansas City Chiefs safety Tyrann Mathieu, Mathieu tweeted that he's "probably not" going to get a new deal in … END_OF_DOCUMENT_TOKEN_TO_BE_REPLACED

KANSAS CITY, Mo. — A manhole left uncovered is the source of concern after a woman damaged her car in Kansas City. The single-car crash happened at 11th Street and Tracy Avenue during the busy … END_OF_DOCUMENT_TOKEN_TO_BE_REPLACED

Kansas City, Missouri's COVID-19 emergency order was set to expire at the end of the month. But Mayor Quinton Lucas made it clear Friday that private businesses can still set their own rules.Any … END_OF_DOCUMENT_TOKEN_TO_BE_REPLACED

KANSAS CITY, MO (KCTV/AP) — All restrictions meant to slow the spread of the coronavirus were being rescinded as of midday Friday in Kansas City, Missouri, following guidance from the U.S. Centers for … END_OF_DOCUMENT_TOKEN_TO_BE_REPLACED