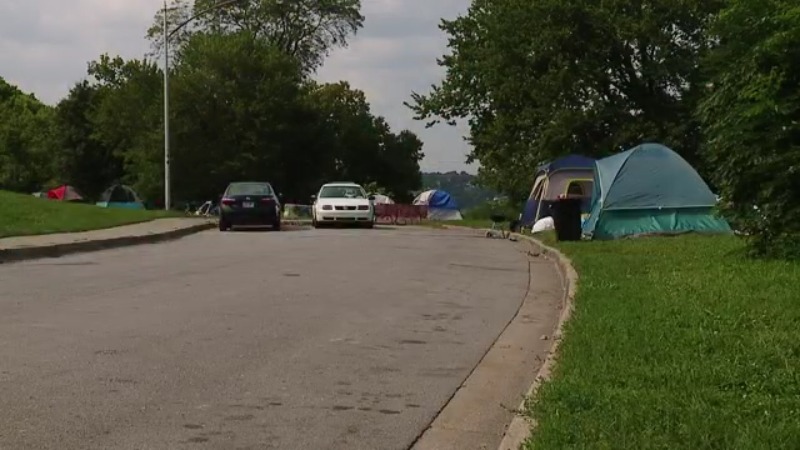 KANSAS CITY, Mo. – A Kansas City homeless camp could be on the move again.

Public Works moved Camp 6ixx out of a median in Westport Sunday. Monday Interim Parks and Recreation Department Director Roosevelt Lyons said the city is violating its own ordinances.

A camp at Penn Valley Park had grown to about 20 tents by Tuesday. One Park Place’s HOA President Jerry Katlin said the city never discussed plans to bus homeless to the park next to the residential building. The Parks Department says it didn’t authorize the move either.

‘All we want is a proper place to stay’: Homeless community camp gets moved out of Westport

“There’s a lot of skaters, there’s some times tennis players me and my brother will come out here and play basketball,” Lauren McDougald said.

“It’s kind of the symbol of Kansas City,” Katlin said.

But now there’s a new symbol of a months-long debate over Kansas City’s homeless issues, tents lining the park’s walkway to the Scout statue.

Sunday Kansas City’s Public Works department cleared the homeless out of Westport as part of what it called an effort “focused on litter, improper storage and tenting in the public right of way.” They moved in when a 90 day program to house homeless in area hotels expired July 15th.

Homeless told FOX4 they were shipped on busses to Penn Valley Park.

“All we want is a proper place to stay,” one woman told FOX4.

“My phone started blowing up Sunday from residents who were concerned about the tents popping up,” Katlin said.

Neighbors weren’t the only ones concerned. Lyons told Kansas City’s 4th District Council Monday night ordinances prohibit anyone from camping in Kansas City parks, or being in them past a Midnight curfew.

“I think there was some misinformation or miscommunication where those individuals could go so they got the impression they could camp out at Penn Valley Park which was not authorized by Parks Department,” Lyons said.

Katlin wants to know who thought it was a good idea?

“Near Scout there’s no sanitation facilities, water, it just doesn’t seem to be a good place for living,” Katlin said.

City officials didn’t answer our questions Tuesday about who authorized the relocation or potential violations of city ordinance.

Kansas City Media Relations Manager Maggie Green offered the following statement, “KCMO Parks and Public Works Departments continue to offer services and connect residents with housing options as we also ask houseless residents to not tent or litter in public right-of-way. There are multiple social service agencies that can help and plenty of space available.”

Lyons said his department will give homeless time to connect with resources and find an alternate locations, but did plan to begin cleaning up the area soon. Homeless who spoke with FOX4 said they hadn’t been told they’d be moved.

Kansas City’s Finance and Governance Committee will discuss a $1.7 million proposal to add bed space to shelters at 10 a.m. Wednesday.

In a since-deleted tweet responding to a question about a potential contract extension for Kansas City Chiefs safety Tyrann Mathieu, Mathieu tweeted that he's "probably not" going to get a new deal in … END_OF_DOCUMENT_TOKEN_TO_BE_REPLACED

KANSAS CITY, Mo. — A manhole left uncovered is the source of concern after a woman damaged her car in Kansas City. The single-car crash happened at 11th Street and Tracy Avenue during the busy … END_OF_DOCUMENT_TOKEN_TO_BE_REPLACED

Kansas City, Missouri's COVID-19 emergency order was set to expire at the end of the month. But Mayor Quinton Lucas made it clear Friday that private businesses can still set their own rules.Any … END_OF_DOCUMENT_TOKEN_TO_BE_REPLACED

KANSAS CITY, MO (KCTV/AP) — All restrictions meant to slow the spread of the coronavirus were being rescinded as of midday Friday in Kansas City, Missouri, following guidance from the U.S. Centers for … END_OF_DOCUMENT_TOKEN_TO_BE_REPLACED