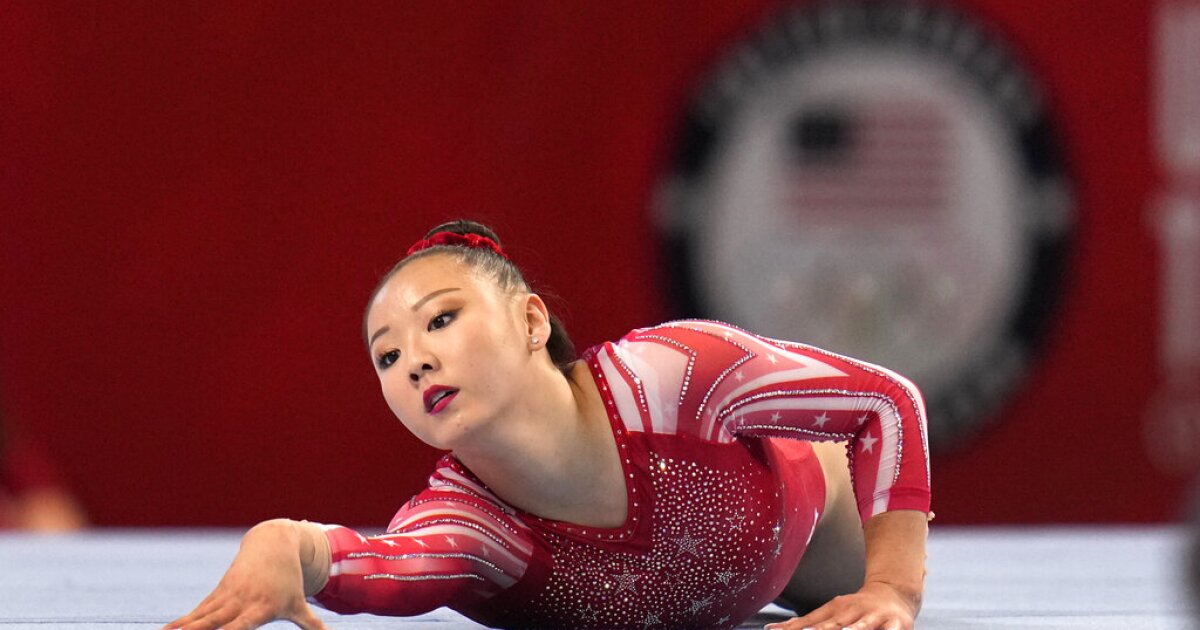 On the final night of the USA Gymnastics Olympic trials, Kara Eaker, 18, of Grain Valley, Missouri, said it meant so much to her to have her training partner, Leanne Wong of Overland Park, Kansas, traveling with her to Tokyo as an alternate on the USA women’s gymnastics team.

Now both of them are in quarantine after Eaker tested positive for COVID and Wong because of contact tracing. Eaker’s positive test comes after she said, June 27, that she had been vaccinated. That same night, Wong said she had not been vaccinated.

Gymnast Kara Eaker, circled in photo, is joined on the podium by her teammate Leanne Wong, pictured to the right of Olympian Simone Biles, at the 2019 U.S. Championships in Kansas City. Both Eaker and Wong are now isolated in Tokyo due to coronavirus protocols.

“I’m so honored to be able to go with these girls,” said Eaker after learning that she had been selected as an alternate. She finished seventh in all-around competition at the trials.

USA Gymnastics said in a statement after Eaker’s positive test on Sunday, July 18, at the pre-Games training camp that Eaker and Wong would be subject to additional quarantine restrictions although the extent of the restrictions weren’t stated.

The statement continued: “Accordingly, on Monday, the Olympic athletes moved to separate lodging accommodations and a separate training facility, as originally planned, and will continue their preparation for the Games.”

Al Fong and his wife, Armine Barutyan-Fong, the co-owners of Great American Gymnastics Express (GAGE) where Eaker and Wong train, are not quarantined, but will remain with the gymnasts.

When Eaker was asked about traveling with Wong, she said, “I work with Leanne every day and I know how much that she puts in and that we do together.”

Now, together, they’ll need to work through the most difficult moments of their gymnastics careers.

In a since-deleted tweet responding to a question about a potential contract extension for Kansas City Chiefs safety Tyrann Mathieu, Mathieu tweeted that he's "probably not" going to get a new deal in … END_OF_DOCUMENT_TOKEN_TO_BE_REPLACED

KANSAS CITY, Mo. — A manhole left uncovered is the source of concern after a woman damaged her car in Kansas City. The single-car crash happened at 11th Street and Tracy Avenue during the busy … END_OF_DOCUMENT_TOKEN_TO_BE_REPLACED

Kansas City, Missouri's COVID-19 emergency order was set to expire at the end of the month. But Mayor Quinton Lucas made it clear Friday that private businesses can still set their own rules.Any … END_OF_DOCUMENT_TOKEN_TO_BE_REPLACED

KANSAS CITY, MO (KCTV/AP) — All restrictions meant to slow the spread of the coronavirus were being rescinded as of midday Friday in Kansas City, Missouri, following guidance from the U.S. Centers for … END_OF_DOCUMENT_TOKEN_TO_BE_REPLACED