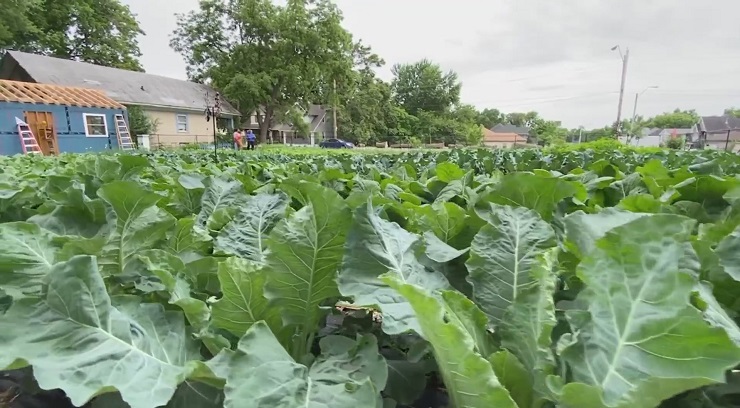 Fresh fruit and vegetables are sprouting right at the corner of 39th Street and Wayne Avenue. This urban farm was a hobby for the Young family. Farmers said it’s now a source for the community.

“The people in this area have limited or no access to quality foods,” farmer Alana Henry said. “So when we think about how impactful that is or how significant that is for quality of life, I think more people will understand why this is such a big deal.”

Young Family Farm is in a food desert, but this family of farmers are hoping to change that narrative.

The farm has been around since 2017, and farmers were selling produce at the Farmer’s Market.

But the pandemic caused farmers to re-invent their business plan when the shutdown happened.

They moved their produce online, and starting next week people can come to the farm and purchase products.

“This is 39th Street,” AY Young said. “Like you’re driving down 39th Street, and you have the opportunity to grab an apple off the tree. Like this is incredible.”

While this is the beginning of a brand new leaf, these local farmers said they hope their mission inspires people to eat healthy and strive for change.

“It’s stimulating the local economy, and it’s bringing people together,” Young said. “This is showing you anything is possible, and the world needs more of it.”

In a since-deleted tweet responding to a question about a potential contract extension for Kansas City Chiefs safety Tyrann Mathieu, Mathieu tweeted that he's "probably not" going to get a new deal in … END_OF_DOCUMENT_TOKEN_TO_BE_REPLACED

KANSAS CITY, Mo. — A manhole left uncovered is the source of concern after a woman damaged her car in Kansas City. The single-car crash happened at 11th Street and Tracy Avenue during the busy … END_OF_DOCUMENT_TOKEN_TO_BE_REPLACED

Kansas City, Missouri's COVID-19 emergency order was set to expire at the end of the month. But Mayor Quinton Lucas made it clear Friday that private businesses can still set their own rules.Any … END_OF_DOCUMENT_TOKEN_TO_BE_REPLACED

KANSAS CITY, MO (KCTV/AP) — All restrictions meant to slow the spread of the coronavirus were being rescinded as of midday Friday in Kansas City, Missouri, following guidance from the U.S. Centers for … END_OF_DOCUMENT_TOKEN_TO_BE_REPLACED