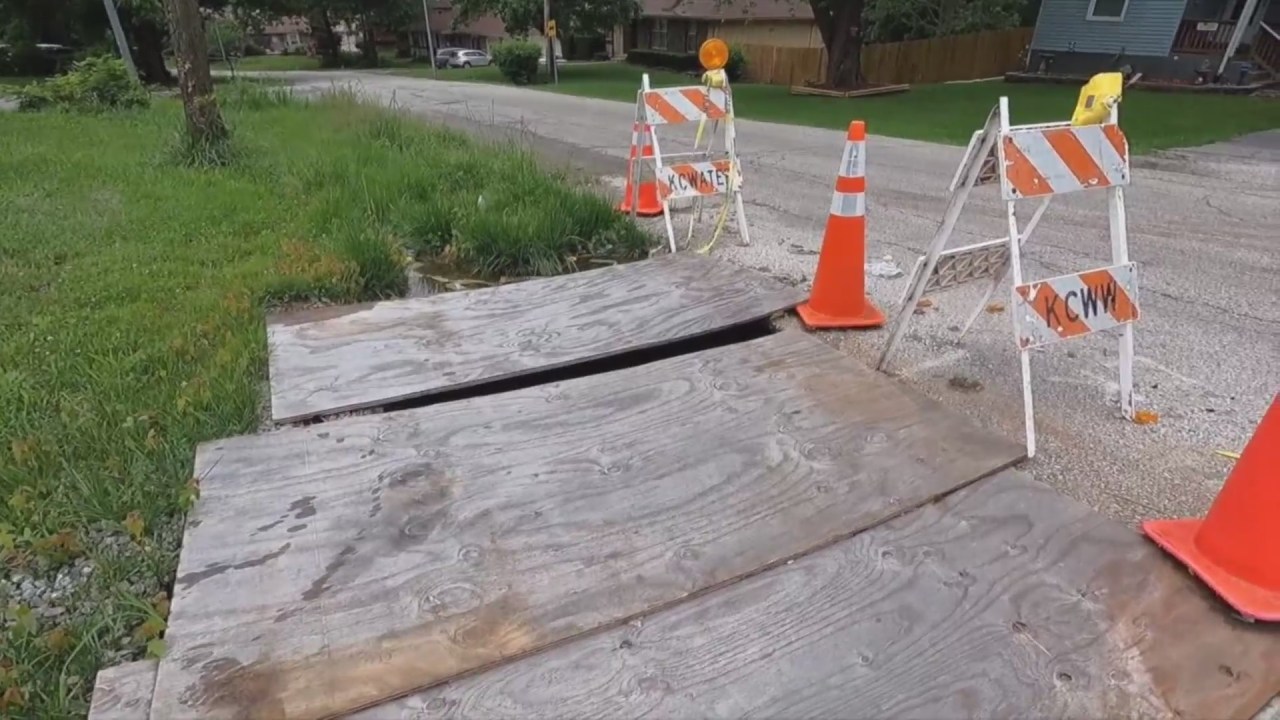 KANSAS CITY, Mo. – A deep hole in a Kansas City neighborhood is not only annoying a homeowner, she says it’s treacherous.

“This is dangerous,” said Drenda Slayden, pointing to a large 4-foot-deep hole at the edge of her yard near E. 99th Terrace and Richmond Avenue.

The Kansas City Water Department dug the hole back in December to fix a broken water main, but never returned to fill it back in. Instead, the Water Department covered the hole with few a plywood boards and put saw horses around it. That’s it.

There’s been a slew of problems ever since.

“We’ve had a deer that got stuck in that hole,” Slayden said. “The neighbors had to get it out, along with a dog.“

Slayden and her neighbors have repeatedly reported the problem to 311, Kansas City’s help line. But no luck.

“They won’t come back and do anything as far as fixing this,” Slayden said.

She’s worried about children falling in the hole, which is now filled with water from the rain. She said the plywood boards placed on top are too flimsy to provide much protection.

Congolese family moves to Kansas City to escape civil war, only to be scammed out of life savings

“It moves even if a 2-year-old stands on it,” said Slayden who operates a daycare from her home.

Plus it’s an obstacle every time she mows the lawn. There’s so much moisture released from the rain water trapped inside the hole that it’s impossible to mow that portion of her yard.

“This is not OK,” she said, referring to the hole. “I can’t keep my yard like this, or I would get a citation.”

That’s why she called FOX4 Problem Solvers. She had our sympathy. Seven months is at least six months too long to be waiting for a problem like this one to be solved.

We called the Kansas City Water Department where a spokeswoman told us a crew would be out next week to solve the problem. She apologized for the months-long delay and said Water Department officials are trying to determine why this problem was never taken care of before now.

In a since-deleted tweet responding to a question about a potential contract extension for Kansas City Chiefs safety Tyrann Mathieu, Mathieu tweeted that he's "probably not" going to get a new deal in … END_OF_DOCUMENT_TOKEN_TO_BE_REPLACED

KANSAS CITY, Mo. — A manhole left uncovered is the source of concern after a woman damaged her car in Kansas City. The single-car crash happened at 11th Street and Tracy Avenue during the busy … END_OF_DOCUMENT_TOKEN_TO_BE_REPLACED

Kansas City, Missouri's COVID-19 emergency order was set to expire at the end of the month. But Mayor Quinton Lucas made it clear Friday that private businesses can still set their own rules.Any … END_OF_DOCUMENT_TOKEN_TO_BE_REPLACED

KANSAS CITY, MO (KCTV/AP) — All restrictions meant to slow the spread of the coronavirus were being rescinded as of midday Friday in Kansas City, Missouri, following guidance from the U.S. Centers for … END_OF_DOCUMENT_TOKEN_TO_BE_REPLACED