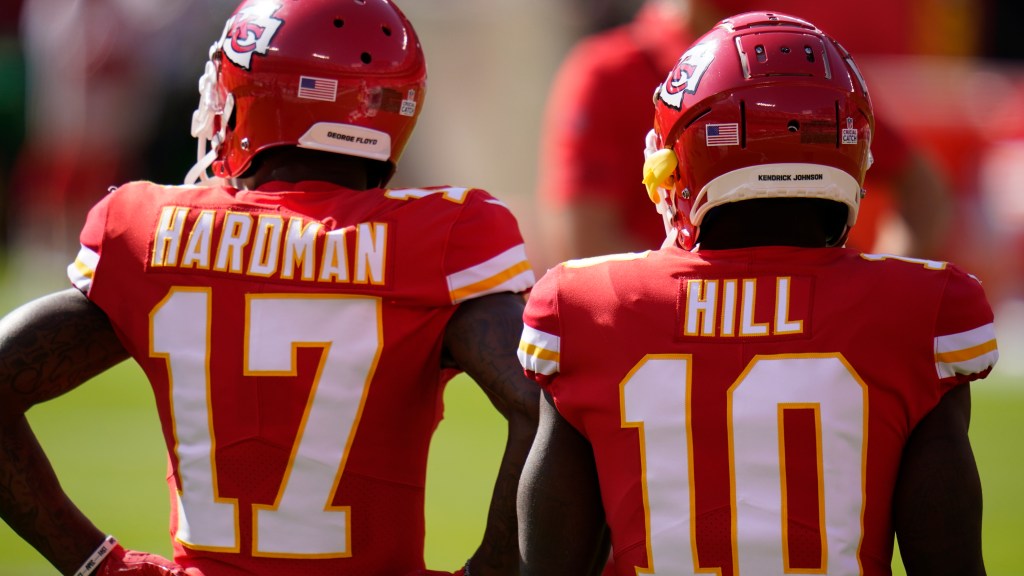 Kansas City Chiefs players are enjoying their brief break before the start of training camp next month. We’ve seen players take to social media with clips enjoying time with family and other non-football-related activities during this time.

Mecole Hardman and Tyreek Hill are constantly competing with each other in a sibling sort of way, and have done so since Hardman’s rookie season. They’re especially competitive when it comes to speed. The duo most recently sparked interest in having another race to prove who is the fastest player on the team.

A Twitter conversation on the topic started with Hardman asking his followers if anyone was interested in a Mario Kart tournament at Dave and Busters in Overland Park, Kansas. His veteran teammate chimed in requesting a real race, with Hardman graciously accepting the challenge without hesitation.

You scared to race me again 🤷🏾‍♂️ https://t.co/c1CGmSrP1W

The innocent Twitter banter caught the attention of entrepreneur J.T. Holmes, who requested details on the results of the first race. Hardman admitted that Hill was victorious in their first encounter.

“He won the first one. I wasn’t loose,” said Hardman. “But he don’t wanna race again, and I don’t blame him.”

He won the first one I wasn’t loose .. but he don’t wanna race again and I don’t blame him

The next question that needs answering: When will Hardman officially get his rematch?

In a since-deleted tweet responding to a question about a potential contract extension for Kansas City Chiefs safety Tyrann Mathieu, Mathieu tweeted that he's "probably not" going to get a new deal in … END_OF_DOCUMENT_TOKEN_TO_BE_REPLACED

KANSAS CITY, Mo. — A manhole left uncovered is the source of concern after a woman damaged her car in Kansas City. The single-car crash happened at 11th Street and Tracy Avenue during the busy … END_OF_DOCUMENT_TOKEN_TO_BE_REPLACED

Kansas City, Missouri's COVID-19 emergency order was set to expire at the end of the month. But Mayor Quinton Lucas made it clear Friday that private businesses can still set their own rules.Any … END_OF_DOCUMENT_TOKEN_TO_BE_REPLACED

KANSAS CITY, MO (KCTV/AP) — All restrictions meant to slow the spread of the coronavirus were being rescinded as of midday Friday in Kansas City, Missouri, following guidance from the U.S. Centers for … END_OF_DOCUMENT_TOKEN_TO_BE_REPLACED