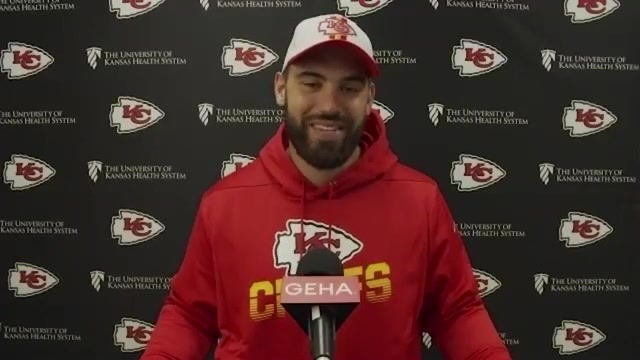 The list of those present includes offensive lineman Laurent Duvernay-Tardif, who opted out of last season to work on the frontlines during the pandemic.

“The last time I put a helmet on before today was at the Super Bowl in Miami, and we won it,” Duvernay-Tardif said.

Now he’s finding his place as part of the Chiefs new offensive line.

“It’s a new group out there, but it’s crazy how they welcomed me today. I really love that. I feel like we’re going to have a great group of guys. I know Wiley, I know Allegreti, but everybody else is new,” Duvernay-Tardif told reporters Tuesday.

“We have a tremendous amount of depth this year and I’m excited to contribute.”#Chiefs

Duvernay-Tardif spent the past year and a half using his medical degree to help fight COVID-19 at a long-term care facility in his native Quebec.

“I don’t regret my decision. I was in the right place in the right moment and was able to put my medical degree to use,” Duvernay-Tardif said.

The lineman doesn’t have any regrets, but that doesn’t mean he didn’t miss the game.

“Football is in your DNA. Throughout November, December and as we were heading to the playoffs, sometimes on Thursdays I would wake up and be like, ‘OK, is it a shell project? Is it a full speed practice?’ I kept asking myself those questions,” Duvernay-Tardif said.

As for staying in shape, the gyms in Canada have been closed because of the pandemic; still, Duvernay-Tardif said he was still motivated to stay in shape. But there’s nothing like getting out on the field.

“I feel like I’m in great shape. I want to use that to my advantage. And it’s just making sure that I didn’t lose any of the IQ football stuff, the speed of the game and so on. For me, watching film is going to be big this year,” Duvernay-Tardif said.

Duvernay-Tardif said during his break from football, it hit that being a professional athlete is temporary. He’s currently pursuing a masters in public health at Harvard University.

In a since-deleted tweet responding to a question about a potential contract extension for Kansas City Chiefs safety Tyrann Mathieu, Mathieu tweeted that he's "probably not" going to get a new deal in … END_OF_DOCUMENT_TOKEN_TO_BE_REPLACED

KANSAS CITY, Mo. — A manhole left uncovered is the source of concern after a woman damaged her car in Kansas City. The single-car crash happened at 11th Street and Tracy Avenue during the busy … END_OF_DOCUMENT_TOKEN_TO_BE_REPLACED

Kansas City, Missouri's COVID-19 emergency order was set to expire at the end of the month. But Mayor Quinton Lucas made it clear Friday that private businesses can still set their own rules.Any … END_OF_DOCUMENT_TOKEN_TO_BE_REPLACED

KANSAS CITY, MO (KCTV/AP) — All restrictions meant to slow the spread of the coronavirus were being rescinded as of midday Friday in Kansas City, Missouri, following guidance from the U.S. Centers for … END_OF_DOCUMENT_TOKEN_TO_BE_REPLACED