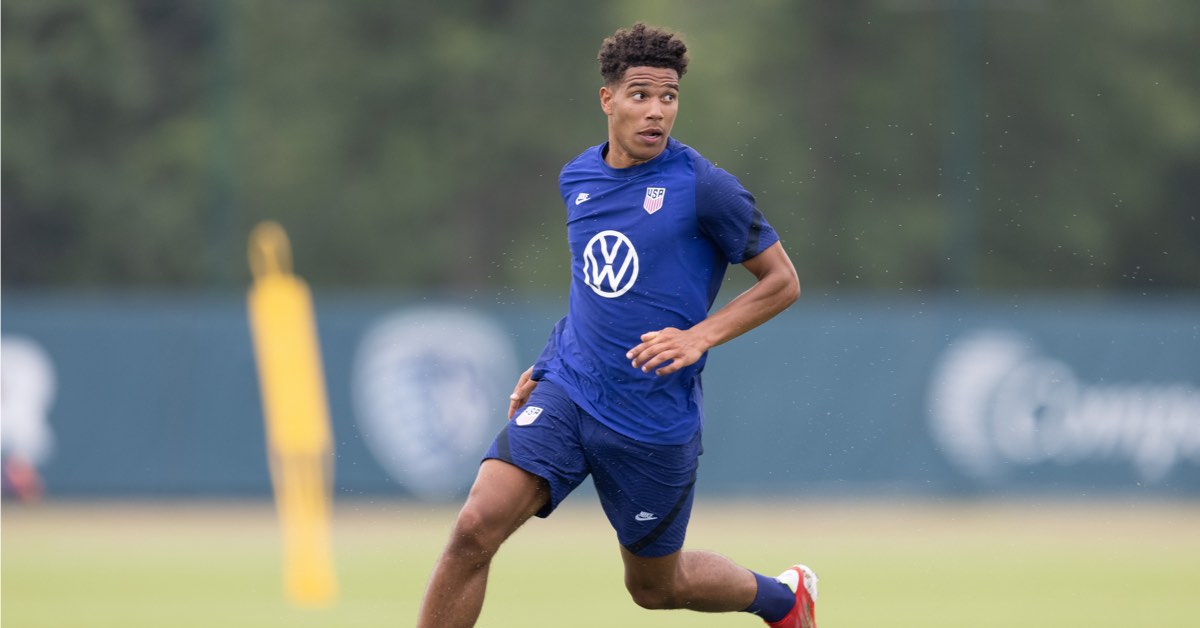 “Kansas City is really home for me,” he said on Tuesday. “I’ve lived in a bunch of places. I just feel I’m back to where I came from, and where maybe eventually I belong.”

Gioacchini belongs to the USMNT during the Concacaf Gold Cup. The Americans will play three Group B matches at Children’s Mercy Park in Kansas City, Kansas. They kick off the tournament Sunday, July 11 against Haiti, then face Martinique on July 15 and Canada on July 18.

“Being able to hopefully play in front of all the people of my home, my town, would be great and fantastic,” said Gioacchini, who expects about 10 friends and family at games, including his mother and sister flying in from Paris. “I couldn’t be happier.”

While living in Overland Park his first eight years, the youngster saw Sporting Kansas City, (then called the Kansas City Wizards), play only once before his family moved to Italy. They returned to the USA four years later in Bethesda. Then it was back to Europe. Gioacchini signed with Paris FC in 2017, joining Caen II the next year and moving to the first team in 2019.

🎙NEW POD! 🎙@Nicholas_gioacc on his fast rise to the #USMNT, his memorable two-goal performance vs. 🇵🇦 and the mentality that keeps him striving for more.

Can’t miss this episode of The U.S. Soccer Podcast!

He made his international debut as a 79th-minute substitute in a scoreless draw at Wales on Nov. 12, 2020 and scored twice in his first start in a 6-2 victory against Panama in Austria four days later.

Greater challenges lie ahead in the Gold Cup, and an opportunity to impress head coach Gregg Berhalter to be included on World Cup qualifying rosters this fall. During the team’s first training session on Tuesday, Gioacchini played both on the wing and at forward.

Gioacchini, who turns 21 on July 25, has become a student of the game.

“I look at players, individuals, and gather information,” he said. “That’s not necessarily to replicate it, but be influenced by it. As a forward I look at top forwards. I even look at some of the forwards’ work here on the National Team because we can learn from everyone, and try out different movements, different things, then see what works and what doesn’t.”

In a since-deleted tweet responding to a question about a potential contract extension for Kansas City Chiefs safety Tyrann Mathieu, Mathieu tweeted that he's "probably not" going to get a new deal in … END_OF_DOCUMENT_TOKEN_TO_BE_REPLACED

KANSAS CITY, Mo. — A manhole left uncovered is the source of concern after a woman damaged her car in Kansas City. The single-car crash happened at 11th Street and Tracy Avenue during the busy … END_OF_DOCUMENT_TOKEN_TO_BE_REPLACED

Kansas City, Missouri's COVID-19 emergency order was set to expire at the end of the month. But Mayor Quinton Lucas made it clear Friday that private businesses can still set their own rules.Any … END_OF_DOCUMENT_TOKEN_TO_BE_REPLACED

KANSAS CITY, MO (KCTV/AP) — All restrictions meant to slow the spread of the coronavirus were being rescinded as of midday Friday in Kansas City, Missouri, following guidance from the U.S. Centers for … END_OF_DOCUMENT_TOKEN_TO_BE_REPLACED