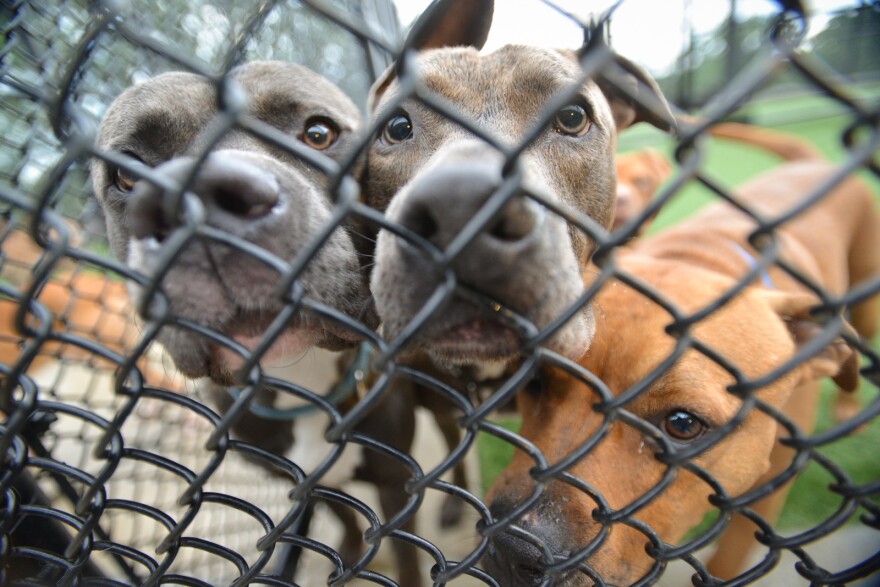 It’s been a record-setting summer for the KC Pet Project. The animal shelter took in its highest-ever number of animals in June: 1,400, compared to its usual 1,000.

It’s one of the only shelters in Kansas City that isn’t allowed to turn away animals. And now, it’s overflowing. Staff have set up extra kennels in their building to keep all the extra dogs. The organization is offering cheap adoptions, but even with discounted fees, the number of pets going out is less than the number coming in. And the shelter is “desperate” for people to foster pets on a temporary basis, said chief communications officer Tori Fugate.

“We are so full and at capacity that we can’t keep up with the volume of animals coming in,” Fugate said.

The summer often brings more animals who are hit by a car or a bullet, Fugate said. But this year, she says more owners are surrendering pets because they can’t afford to care for them. Another contributing factor: housing issues like evictions, moving to a new place where pets aren’t allowed or not being able to afford a pet deposit or pet rent.

“We are seeing a lot of people that unfortunately are going through evictions and they can’t find a place to live with their pets,” Fugate said. “There simply is not enough affordable housing in Kansas City for people and pets, and especially for people that own large-breed dogs.”

A litter of six kittens clambers on their kennel Thursday morning at KC Pet Project where “kitty litter” season has added to the overcrowding of animals.

In June alone, 591 animals were surrendered to the KC Pet Project by their owners. It’s another record for the organization and an 88% increase over last June, Fugate said.

Other Kansas City animal shelters say that throughout the COVID-19 pandemic, they’ve seen more people giving up their pets or seeking assistance to take care of them.

The Humane Society of Greater Kansas City said between January and June 2021, 56 cats were given to the shelter by owners who had housing issues like hoarding, evictions or moving to a new place where pets are not allowed. In all of 2020, only 17 cats were relinquished by owners with housing issues.

The shelter is now over capacity and has had to turn away many animals, said Meagan Parks, director of business development. It usually cares for 65 dogs and 165 cats — divided between the shelter and foster families. Currently, the organization is caring for about 100 dogs and 200 cats. Workers have put kennels in offices to house extra dogs. Meanwhile, staff are overwhelmed and many volunteers still haven’t come back, Parks said.

“There’s never enough resources,” she said. “Turning people away when they need help is just the worst feeling.”

Geoff Hall, president of Wayside Waifs, said his shelter hasn’t seen a noticeable rise in owners giving up their pets due to evictions during the pandemic. But over the past year, he said he has observed more people using his organization’s pet food pantry because they can’t afford to feed their pets.

“While they may not be surrendering their pets, they are looking for additional assistance,” he said. “It’s usually loss of income for a temporary basis. That is the thing that we mostly see.”

Michelle Rivera, founder and CEO of the Pet Resource Center of Kansas City, said she saw a rise in people seeking the affordable veterinary care and free pet food offered by her organization.

“A lot of people were struggling financially through loss of jobs,” she said.

Pets play an essential role in making people happy, especially if those people are already vulnerable and feeling disconnected from society, Rivera said. Some people who seek help at the Pet Resource Center credit their pets with keeping them alive.

“The homeless, people who don’t have anybody else in their family — their pets are all they have sometimes,” Rivera said. “Especially during COVID and these troubling times, being able to turn towards a pet for unconditional love and support is really important.”

Sheltered dogs at KC Pet Project take time out of their kennels to get exercise Thursday morning.

The federal Centers for Disease Control and Prevention have issued a moratorium on evictions across the U.S. But that doesn’t mean people aren’t getting evicted in Kansas City, said Rachel North, a staff attorney at Legal Aid of Western Missouri, an organization that offers assistance with housing, immigration and other civil legal issues.

The moratorium only applies to evictions due to nonpayment of rent, North said. So it’s possible people are getting evicted for other reasons. And local judges can interpret the moratorium in different ways, choosing to rule that a person should be evicted, even if the moratorium prevents that person from actually being removed from a home right now.

North said people facing eviction may not know about the CDC moratorium and might not have submitted a required CDC declaration to the court and their landlord, North said.

“People might not know that they’re protected,” she said. “You have to take affirmative steps.”

According to Princeton University’s Eviction Lab, there were 511 evictions in Kansas City in June 2021. It’s the highest number of evictions in a single month since February 2020, but it’s still far below the pre-pandemic average of 823 eviction filings in a typical June.

North said she’s not sure which of her clients have been evicted because of their pets or have had to give up their pets because of their housing situations. But she said it’s a common issue for people who are being evicted. She expects the number of evictions to rise when the federal moratorium lapses at the end of this month.

“We’re kind of on that borderline where this protection is going to run out,” North said. “We don’t have a local protection in place in Kansas City.”

Fugate, with the KC Pet Project, also said she doesn’t expect things to slow down.

“This is going to be our reality for the whole summer,” she said. “We’re going to need our community’s help to get through this.”

In a since-deleted tweet responding to a question about a potential contract extension for Kansas City Chiefs safety Tyrann Mathieu, Mathieu tweeted that he's "probably not" going to get a new deal in … END_OF_DOCUMENT_TOKEN_TO_BE_REPLACED

KANSAS CITY, Mo. — A manhole left uncovered is the source of concern after a woman damaged her car in Kansas City. The single-car crash happened at 11th Street and Tracy Avenue during the busy … END_OF_DOCUMENT_TOKEN_TO_BE_REPLACED

Kansas City, Missouri's COVID-19 emergency order was set to expire at the end of the month. But Mayor Quinton Lucas made it clear Friday that private businesses can still set their own rules.Any … END_OF_DOCUMENT_TOKEN_TO_BE_REPLACED

KANSAS CITY, MO (KCTV/AP) — All restrictions meant to slow the spread of the coronavirus were being rescinded as of midday Friday in Kansas City, Missouri, following guidance from the U.S. Centers for … END_OF_DOCUMENT_TOKEN_TO_BE_REPLACED