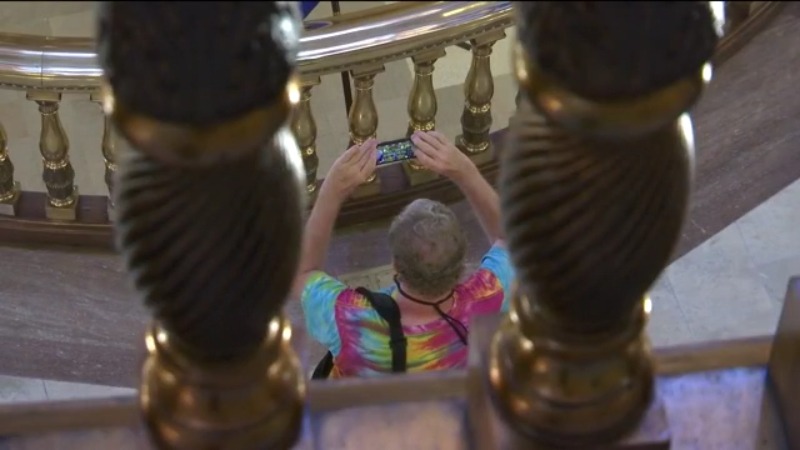 TOPEKA — Things are getting back to normal at the Kansas Statehouse as visitors are making their way into the historic building.

Paul Kiely is in the middle of visiting all 50 state capitols. He said he’s somewhere in the 30 in how many he has toured. On Monday, he was the first person to take a guided tour of the Kansas Capitol since March 2020.

Unemployed Kansans now have this new requirement to get benefits

“I’m here because it’s the next on the list,” Kiely said.

The Kansas Capitol has been closed to the public since lawmakers returned to Topeka in January.

“I planned this trip around the closure of state legislatures so there would be minimal crowds and easy parking,” Kiely said.

He said his trip to the Sunflower State was well worth it.

“This is very welcoming and very photogenic, very easy access. And the murals are stunning, and the dome is stunning. Everything is really nice. I mean, I’d recommend this place to anybody,” Kiely said.

Computer science to count as core credit in Kansas high schools; What led to the change?

Tour guides said people have been clamoring to get back into the Capitol for months.

“Definitely saw that during the pandemic when there were no tours allowed. People called in, or people just around the building being like, ‘Why are there no tours?’” tour guide Quan Nguyen said.

Nguyen started as a guide in February 2020, but the pandemic interrupted his new job that he was excited to get the hang of.

“Really interested in history. I’m a history minor at Washburn, and it was just a nice fit, a job that I actually cared about,” Nguyen said.

Now he’s ready for crowds to start to filling the building.

The Capitol gift shop is also open for the first time in 15 months, but dome tours to the top aren’t happening yet.

You can check out hours of operation here.

In a since-deleted tweet responding to a question about a potential contract extension for Kansas City Chiefs safety Tyrann Mathieu, Mathieu tweeted that he's "probably not" going to get a new deal in … END_OF_DOCUMENT_TOKEN_TO_BE_REPLACED

KANSAS CITY, Mo. — A manhole left uncovered is the source of concern after a woman damaged her car in Kansas City. The single-car crash happened at 11th Street and Tracy Avenue during the busy … END_OF_DOCUMENT_TOKEN_TO_BE_REPLACED

Kansas City, Missouri's COVID-19 emergency order was set to expire at the end of the month. But Mayor Quinton Lucas made it clear Friday that private businesses can still set their own rules.Any … END_OF_DOCUMENT_TOKEN_TO_BE_REPLACED

KANSAS CITY, MO (KCTV/AP) — All restrictions meant to slow the spread of the coronavirus were being rescinded as of midday Friday in Kansas City, Missouri, following guidance from the U.S. Centers for … END_OF_DOCUMENT_TOKEN_TO_BE_REPLACED