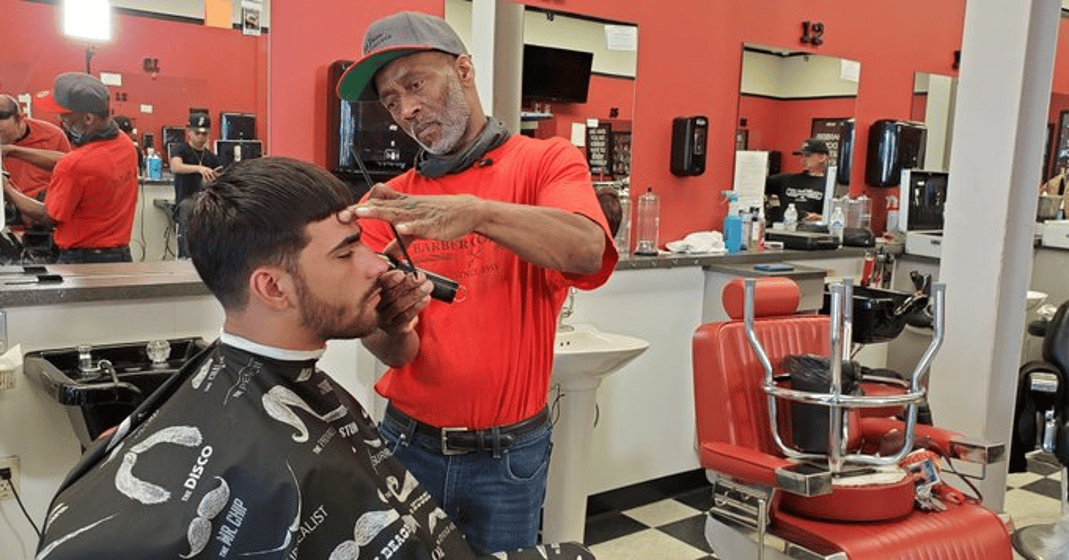 WICHITA, Kan. (KAKE) – Many consider being unemployed practically a crime. Yet for folks like Dwight Carter and Carl Gray, who have an actual criminal record, those job openings often remain out of reach.

“A lot of people have a stigma on people that have been to prison. They assume that they’re just all bad people,” said Carter.  “If you have any felonies, get any felonies, usually that deters you from getting the job.”

No matter how hard they try, as Gray found out.

“I knew I wanted to work.  I didn’t want to go back to the same stuff that I was doing before I was let out,” Gray said.

Yet, despite getting certified as a welder, he still couldn’t find work.

“Some of them went back and resorted to what got them into prison the first time because they couldn’t find the work,” Carter said of friends he knew who ended up back in prison.

On the other hand, helping former felons find a job means lower unemployment and less crime for everyone.  Plus, it helps them support their families, pay taxes, even pump more spending money into your community.

Which is why, after years of a growing worker shortage, the State of Kansas is encouraging employers to hire applicants with criminal histories as part of a statewide public private partnership.

“If we just had a blanketed, you know, we’re not going to hire you, policy, we miss out on the opportunity for a lot of talent,” said Monica Stopczynski, who works HR for Koch Industries.

Stopczynski says about a third of the U.S. work force has a criminal past. That’s why her employer has joined that public private partnership.

“We all have made a mistake in our lives and we don’t want to be known for our worst day,” she said. “If we don’t give people opportunity, then they’re going to be forced to revert to other ways to survive.”

“Their criminal record doesn’t come into play, if you will, until after we’ve made the offer,” Buckley said.

At that point, the company has a team that considers the applicant’s background.  Some charges they no longer worry about at all.  Others, a specialized team from HR will discuss before moving forward, performing what they call a risk assessment.

“We look at the individual, the role that they’re applying for, what the offense is, and it’s a very individual approach,” Stopczynski explained.

Once employed, the company treats them no differently than any other worker, no extra supervision, no double checking on them.  They’re direct supervisors and co-workers never know about their pasts.

It’s a hiring system Buckley now works to share with other companies.  He says at first there was some worry about how well this approach would work.

“I think everybody was open to the idea. They saw the mutual benefit to all those people I just laid out for you.  But there was some apprehension. ‘Well, my gosh, I don’t want somebody that’s had some criminal past in my workforce,’ and that’s sort of human nature,” he said.

But, Buckley added once companies started making hires they quickly realized those employees became some of the most loyal workers on the payroll.

“They see the quality of the employee who is extremely grateful, and they become very loyal to the company who took a risk on them,” he said.

That’s something Gray understands well.  It wasn’t until he came to the Old Town Barber College in Wichita that he finally found a career that helped him make ends meet.

“It kind of made me smile, that made me feel good about myself,” Gray said.

In a since-deleted tweet responding to a question about a potential contract extension for Kansas City Chiefs safety Tyrann Mathieu, Mathieu tweeted that he's "probably not" going to get a new deal in … END_OF_DOCUMENT_TOKEN_TO_BE_REPLACED

KANSAS CITY, Mo. — A manhole left uncovered is the source of concern after a woman damaged her car in Kansas City. The single-car crash happened at 11th Street and Tracy Avenue during the busy … END_OF_DOCUMENT_TOKEN_TO_BE_REPLACED

Kansas City, Missouri's COVID-19 emergency order was set to expire at the end of the month. But Mayor Quinton Lucas made it clear Friday that private businesses can still set their own rules.Any … END_OF_DOCUMENT_TOKEN_TO_BE_REPLACED

KANSAS CITY, MO (KCTV/AP) — All restrictions meant to slow the spread of the coronavirus were being rescinded as of midday Friday in Kansas City, Missouri, following guidance from the U.S. Centers for … END_OF_DOCUMENT_TOKEN_TO_BE_REPLACED