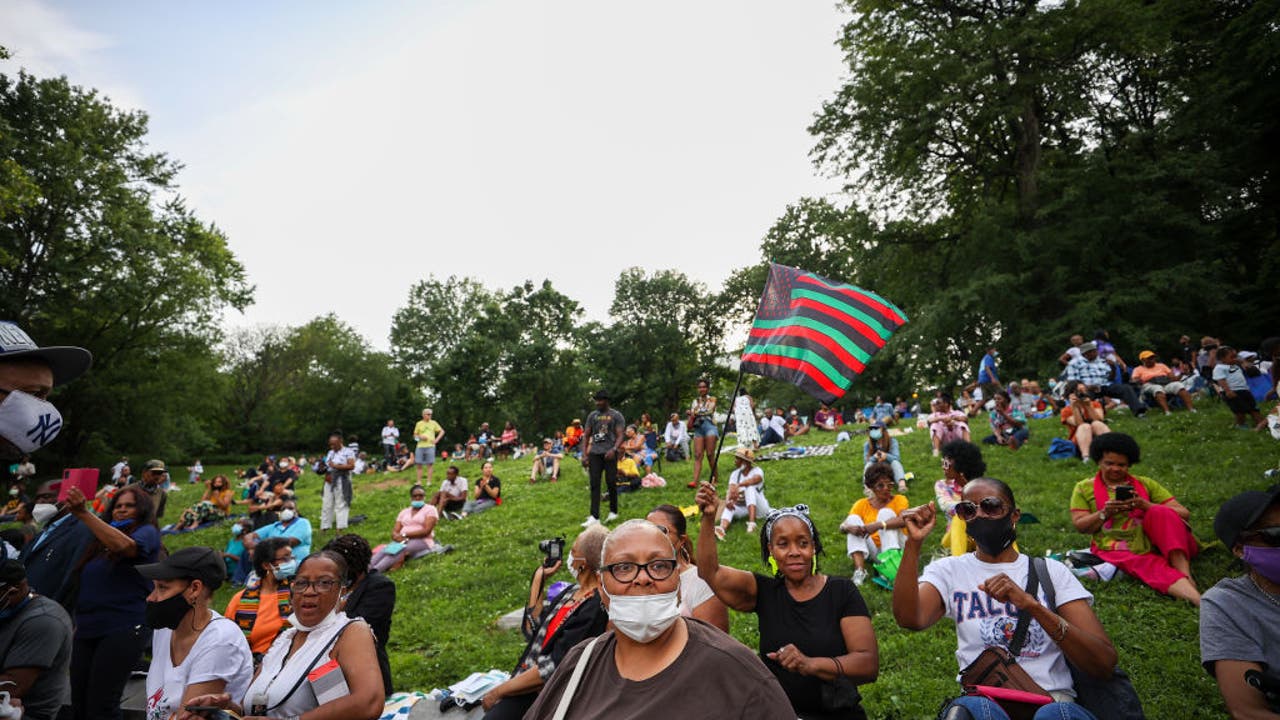 President Joe Biden tweeted in observance of Juneteenth Saturday, two days after signing the bill into law that makes the day that commemorates the end of slavery in the United States a federal holiday.

“Juneteenth marks both the long, hard night of slavery and subjugation – and the promise of that brighter morning to come. It’s a day of profound weight and power. Today and every day, we must work to ensure our nation finally lives up to its promise of equality for all,” he tweeted.

Biden signed the bill Thursday that was passed by Congress to set aside Juneteenth, or June 19th, as a federal holiday.

Cities, businesses and organizations all over the country are holding events such as parades, picnics and lessons.

A new national holiday was “really awesome. It’s starting to recognize the African American experience,” said Detroit artist Hubert Massey, 63. “But we still have a long way to go.”

In Detroit, which is 80% Black, students from University Prep Art & Design High School dodged rain to repaint Massey’s block-long message, “Power to the People,” which was created last year on downtown Woodward Avenue.

The ‘o’ in “Power” was a red fist in memory of George Floyd and other victims of excessive force by police, Massey said.

“We did the original,” said Olivia Jones, 15, leaning on a long paint roller. “It’s important that we return and share that same energy.”

Juneteenth commemorates June 19, 1865, when Union soldiers brought the news of freedom to enslaved Black people in Galveston, Texas, two months after the Confederacy had surrendered. It was about 2 1/2 years after the Emancipation Proclamation freed slaves in Southern states.

The next year, the now-free people started celebrating Juneteenth in Galveston.

Then, more than a hundred years later, Texas became the first state to declare Juneteenth a holiday in 1979. It was thanks to the work of state Rep. Al Edwards, who passed away in April 2020.

A statue of Edwards stands in Galveston, which is the birthplace of the holiday and where the biggest Juneteenth celebration occurs.

RELATED: Juneteenth: What its path to federal holiday status looked like

This year, celebrations included the dedication of a 5,000-square-foot mural titled “Absolute Equality.” Opal Lee, 94, who was at Biden’s side when he signed the bill, returned to Fort Worth, Texas, to lead a 2.5-mile walk symbolizing the 2 1/2 years it took for slaves in Texas to find out they’d been freed.

Officials in Bristol, Rhode Island, unveiled a marker that describes the seaport’s role in the slave trade. The marker was placed at the Linden Place Museum, a mansion built by Gen. George DeWolf, who was a slave trader. The Rhode Island Slave History Medallion organization raises public awareness about the state’s role in slavery.

Food, live music, games and poetry readings were on the agenda at a park in Kansas City, Missouri, at an event organized by Black Rainbow, a relatively new group advocating for oppressed people.

“Given the last year of trauma, brutality and grief that the Black community suffered on a daily basis, it is essential to our survival that we make moments for joy, for love and for celebrating our resilience,” said co-founder Ryan Sorrell.

Hundreds of people gathered for a free concert in New York’s Times Square organized by The Broadway League, the trade group for the Broadway entertainment industry.

A Juneteenth parade was held in Evanston, Illinois, a Chicago suburb that is using tax revenue from marijuana sales to offer housing grants to Black residents for past discrimination and the lingering effects of slavery.

New York civil rights activist the Rev. Al Sharpton offered a tough message during a speech at his National Action Network, saying Senate Republicans who voted unanimously to make Juneteenth a federal holiday should also support Democratic bills that change voting laws and make it easier to crack down on rogue police officers.

Meanwhile, Black Americans rejoiced after the president made Juneteenth a federal holiday and many agree more is still needed to be done to change policies that are disadvantageous to them.

On Thursday, during a bill-signing ceremony, Biden agreed and singled out voting rights as an area for action.

Republican-led states have enacted or are considering legislation that activists argue would curtail the right to vote, particularly for people of color. Legislation to address voting rights issues, and institute policing reforms demanded after Floyd’s death and other unarmed Black men’s, remains stalled in the Congress that acted swiftly on the Juneteenth bill.

Other people want the federal government to make reparations or financial payments to the descendants of slaves in an attempt to compensate for those wrongs.

Meanwhile, efforts are also afoot across the country to limit what school districts teach about the history of slavery in America.

RELATED: Juneteenth: These films on race, inequality and emancipation are free to stream

This story was reported from Detroit. The Associated Press contributed.

In a since-deleted tweet responding to a question about a potential contract extension for Kansas City Chiefs safety Tyrann Mathieu, Mathieu tweeted that he's "probably not" going to get a new deal in … END_OF_DOCUMENT_TOKEN_TO_BE_REPLACED

KANSAS CITY, Mo. — A manhole left uncovered is the source of concern after a woman damaged her car in Kansas City. The single-car crash happened at 11th Street and Tracy Avenue during the busy … END_OF_DOCUMENT_TOKEN_TO_BE_REPLACED

Kansas City, Missouri's COVID-19 emergency order was set to expire at the end of the month. But Mayor Quinton Lucas made it clear Friday that private businesses can still set their own rules.Any … END_OF_DOCUMENT_TOKEN_TO_BE_REPLACED

KANSAS CITY, MO (KCTV/AP) — All restrictions meant to slow the spread of the coronavirus were being rescinded as of midday Friday in Kansas City, Missouri, following guidance from the U.S. Centers for … END_OF_DOCUMENT_TOKEN_TO_BE_REPLACED