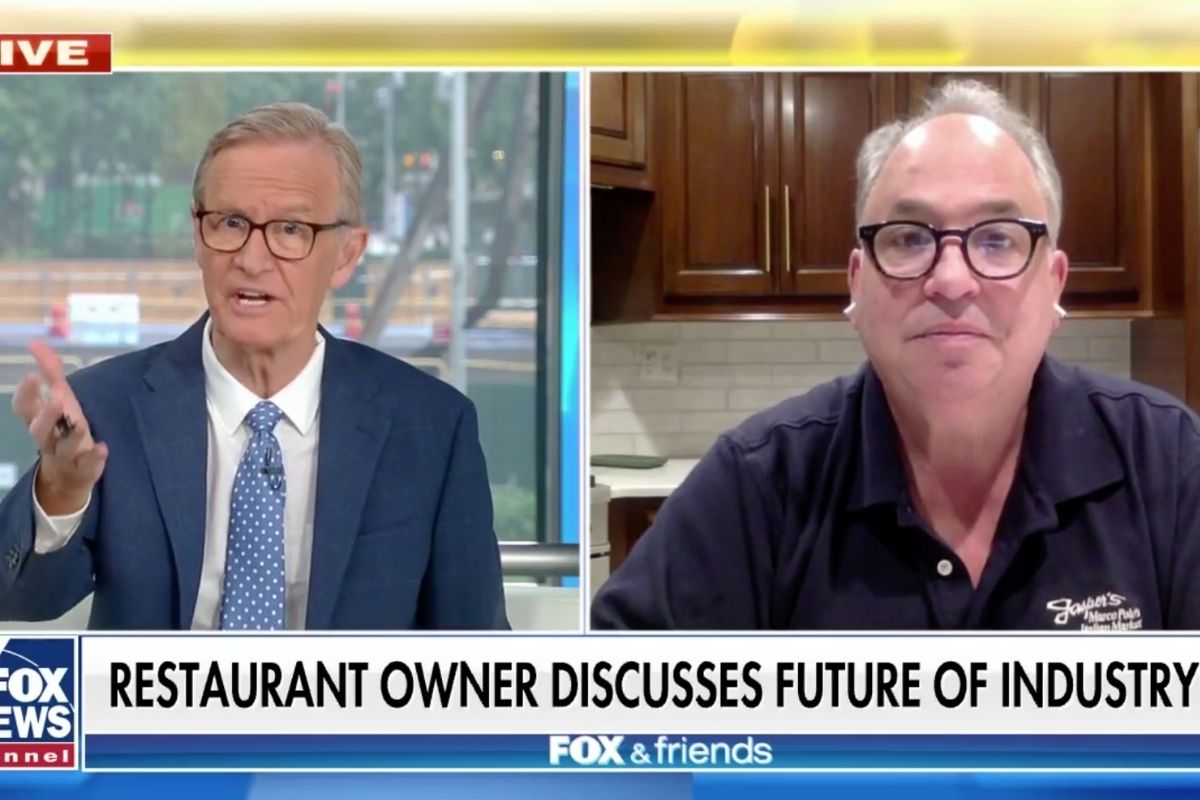 The COVID-19 pandemic and the subsequent quarantine has revealed a lot of things. For some, it’s just knowing where your family, friends, or neighbors stand when it comes to vaccines and science. And for others, it’s knowing the disturbing values that someone holds and the lengths they’re willing to go to in order to hold them in an ever-changing world. Jasper Mirabile, the owner of Jasper’s Italian Restaurant and Marco Polo’s Italian Market in Kansas City, just so happens to fall into the latter category.

In a Fox & Friends segment, Mirabile bemoaned the changing conditions of employment in the United States, primarily in the restaurant sector. He was worried about not having enough employees and employees expecting more money (the horror) when, by his own admission, business at his restaurants is up “22% over 2019,” and he looked down upon restaurants using Paycheck Protection Program money for signing bonuses as an incentive to bring employees back or to their restaurants in the first place. And honestly, the privilege is showing from top to bottom when it comes to this business owner.

First of all, people aren’t just sitting on their couches and waiting for a handout, like host Steve Doocy said. What people are realizing is that they don’t have to work a grueling job that barely pays them a living wage. Instead, they can work from home in a new industry, start a business of their own, or work on their education as a means of getting a better job in the future. And this narrative that people are just sitting around instead of working shows how ignorant Mirabile is.

Secondly, businesses offering more money for these positions isn’t some sort of evil that needs to be watched carefully, like Fox & Friends wants you to believe. It’s paying employees a fair wage for the hard work they do that makes the business’s existence possible at all. It’s making sure employees don’t have to stretch themselves thin over multiple jobs to pay the rent, put food on their table, and provide for their family. And it’s about setting a standard where these employees won’t get taken advantage of anymore.

And lastly, using PPP money for signing bonuses to get people to work at your restaurant isn’t a bad idea. People are hurting right now but still looking for better options for themselves and their families, and using PPP to bring them in could be that weight off the employee’s shoulder that they needed. But what about next year, Mirabile and Doocy ask? I thought your restaurant had been doing really well, Mirabile? So much so that I’m wondering why you got a PPP loan in the first place—not to mention a $500,000 grant to revitalize the restaurant in the wake of the pandemic.

Wild how he can somehow afford to completely close down for over a week for annual “vacation time” but paying employees a decent amount of money is a financial stressor 🤔 pic.twitter.com/D1AJAYDJrn

Not only is Mirabile confused as to why he’s short on employees when he’s been publicly calling his prospective staffers lazy for a while now:

Jasper’s been wilding on this for a while. Surely one of his many friends in local PR/media could mention that debasing the people you’re trying to hire on “Fox & Friends” is not a winning strategy. https://t.co/PYWNAZ6ejz

But if you click on the article in the above tweet, you may notice it contains an interesting detail: “In the 67 years that Jasper’s has been in business, the family has never had a hard time finding people to work.” You may then look at that “67” and do a double take at the man in the Fox News clip—and then some things about his sense of entitlement may start to click into place.

Jasper’s was originally founded by his grandparents and father, Jasper Mirabile Sr., before arriving at its current location after a long history, including: “In 1997, the Mirabile’s shocked their loyal patrons by making the decision to sell out to Walgreen’s. They moved further south to a shopping center they owned where they could expand, have more parking and merge many of their popular dishes into a new space.”

“Football team owners, Hollywood stars, and other celebrities including Walter Cronkite, Ed McMahon, and several sitting presidents have come into the restaurant,” and yet Mirabile complains of employees wanting to make roughly $62,000–$73,000 per year, based on the hourly rates he brought up.

Sure, Mirabile himself trained as a chef, and apparently “Leonard, Leonard’s son Jasper III (aptly nicknamed 3J) and J.J. [Jasper Mirabile of Fox News segment fame] continue to work together. There is always a Mirabile on the clock at Jasper’s.” But joining an already successful business with his family owning their own storefronts certainly gave him enough advantages that it’s hard to listen to him begrudge others a helping hand they didn’t get from family, or more compensation for carrying out the business of a restaurant that’s doing better than ever.

Why do all the recipients of enhanced pandemic unemployment benefits and people who want a fair wage not just inherit their family business and commercial real estate to run it out of? They just want a handout, I guess.

Want more stories like this? Become a subscriber and support the site!

—The Mary Sue has a strict comment policy that forbids, but is not limited to, personal insults toward anyone, hate speech, and trolling.—

Have a tip we should know? [email protected]

In a since-deleted tweet responding to a question about a potential contract extension for Kansas City Chiefs safety Tyrann Mathieu, Mathieu tweeted that he's "probably not" going to get a new deal in … END_OF_DOCUMENT_TOKEN_TO_BE_REPLACED

KANSAS CITY, Mo. — A manhole left uncovered is the source of concern after a woman damaged her car in Kansas City. The single-car crash happened at 11th Street and Tracy Avenue during the busy … END_OF_DOCUMENT_TOKEN_TO_BE_REPLACED

Kansas City, Missouri's COVID-19 emergency order was set to expire at the end of the month. But Mayor Quinton Lucas made it clear Friday that private businesses can still set their own rules.Any … END_OF_DOCUMENT_TOKEN_TO_BE_REPLACED

KANSAS CITY, MO (KCTV/AP) — All restrictions meant to slow the spread of the coronavirus were being rescinded as of midday Friday in Kansas City, Missouri, following guidance from the U.S. Centers for … END_OF_DOCUMENT_TOKEN_TO_BE_REPLACED