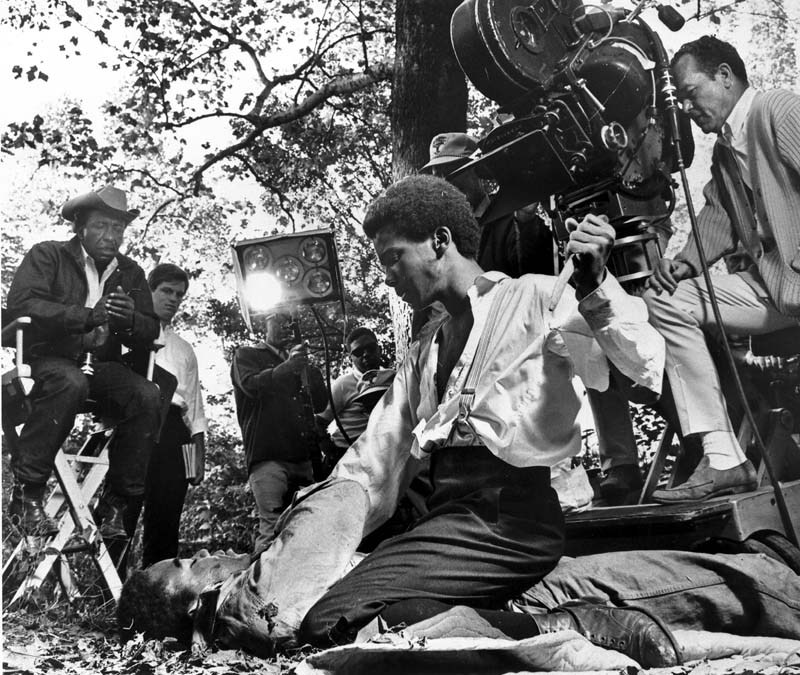 The Kansas Reflector welcomes opinion pieces from writers who share our goal of widening the conversation about how public policies affect the day-to-day lives of people throughout our state. Kirk Sharp is executive director of the Gordon Parks Museum at Fort Scott Community College.

“The Learning Tree“ was produced by Warner Brothers-Seven Arts Studios. Parks not only directed the film, he also wrote and produced it and composed the soundtrack.

“The Learning Tree” is based on Parks’ semi-autobiography 1963 novel of the same title, about growing up in a Midwestern small town in the mid-late 1920s when life was made difficult by segregation and poverty. The film is centered on the lead character, Newt Winger. Parks portrays Newt as a young teenager who struggles with racism, discrimination and poverty, while also having to deal with the emotions of love, conflict, and fear of death in the fictional town of Cherokee Flats, Kansas.

Parks chose his hometown of Fort Scott to film this momentous movie in 1968. In 1989, “The Learning Tree” was among the first 25 important films to be placed in the Library of Congress’ National Film Registry to increase awareness and preservation.

This is a coming of age story about a young man who grows up dealing with bigotry, poverty, violence, conflict and love, along with the unwavering support and love of his hardworking family. The film realistically portrays the severity of social and racial injustices and inequality. There are several moving and emotional scenes throughout the film; one of them is when Newt talks with his mother, Sarah, about living in Cherokee Flats and dealing with his conflicted emotions about his home and who he is growing to be.

Probably the most powerful scene takes place in a courtroom, when the judge reprimands white community residents in the gallery as they shout viciously with racial epithets and other expressions of hate and anger toward the accused. The judge vividly reminds the courtroom of the racial divide within the community and how every person has a right to a fair trial in a court of law and how they took that right away with their hate.

Even though “The Learning Tree” is set in the 1920s, it has obvious parallels with today’s struggles against racial inequity and social injustice still fed by the same hate that existed when Gordon Parks was a boy.

This film breaks all racial stereotypes of how Black families are perceived on the big screen. It continues to provide an important message we all can learn from, showing us how to learn to live and love and not love to hate. It illustrates the importance of equity and social justice for all, not just for the select or privileged. We are inspired to learn to accept and respect the differences in people in other races and cultures, not to judge, disenfranchise and suppress others with different standards, boundaries and obstacles. We are reminded that everyone has worth and feelings, and not to devalue, shame or discourage.

We can all learn from watching “The Learning Tree.” Along with Parks’ other films, and his photography, books, music, poetry and a long list of lifetime achievements, it provides an enduring legacy that should make all Kansans proud.

Those of us at the Gordon Parks Museum in Fort Scott are dedicated to celebrating his life and work, and to using his remarkable life story to teach others about artistic creativity, cultural awareness and the role of diversity in our lives. Our goal is to keep his legacy alive and well for generations to come. The museum collections include many of his famous photographs, awards, medals and honorary degrees, as well as replica furnishings from his apartment in New York.

The camera was Gordon Parks’ choice of weapon to fight against racism, discrimination and poverty. If you are far away and unable to travel to Fort Scott, you can still always appreciate his work and legacy like we do.

Now is a perfect time to watch, or re-watch, “The Learning Tree.”

KANSAS CITY, Mo. — Kansas City, Missouri, leaders once again will look into renaming city streets in honor of Dr. Martin Luther King Jr. The city's Board of Parks and Recreation Commissioners will … END_OF_DOCUMENT_TOKEN_TO_BE_REPLACED

Kansas City, Missouri police are investigating a shooting in the area of E. 60th and Highland Avenue. It happened at 8:40 p.m. Saturday. Police initially said one person was in critical condition, but … END_OF_DOCUMENT_TOKEN_TO_BE_REPLACED