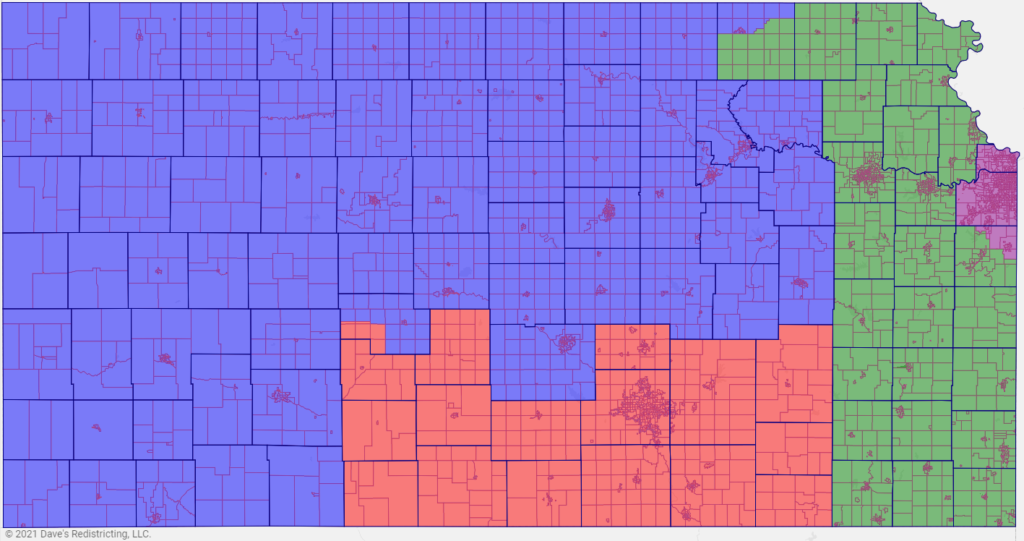 In October 2020, Susan Wagle, a Republican who was then president of the Kansas Senate, said Republicans could redraw self-serving legislative and congressional districts as long as they have a two-thirds majority in the Statehouse to override a veto by Gov. Laura Kelly. (Screen capture from video tweeted by Davis Hammet)

The Kansas Reflector welcomes opinion pieces from writers who share our goal of widening the conversation about how public policies affect the day-to-day lives of people throughout our state. Richard Pund is an electrical engineer interested in improving elections at all levels of government. He lives in Overland Park.

Redistricting will be a major topic for the next year, and for good reason. The Kansas Legislature will draw maps that will affect our elections for the next decade.

Leading Republicans involved in this process have openly described this as an opportunity to draw congressional districts that will take out Democratic 3rd District U.S. Rep. Sharice Davids and give Republicans an advantage. The way things are currently set up, politicians have both the means and the incentive to gerrymander district maps to their favor. If there’s a Republican-held district that’s turning more purple, why wouldn’t the party try to give it some more Republican neighborhoods to make sure it doesn’t flip?

This problem is actually due to how our elections work. Because the margin of victory doesn’t matter, voting blocs can be packed together or divided up to amplify the reach of some groups at the expense of others. In other words, a district’s boundaries play as much of a role in who wins elections as the candidates and voters do.

An independent redistricting committee would certainly be an improvement by taking the fox out of the henhouse, though the districts drawn by that committee would still influence the outcome of future elections.

As the maps below demonstrate, it’s about as easy to draw a congressional map of Kansas that (keeping all counties intact) elects two Democratic representatives and two Republican as it is to draw one that elects 4 Republican representatives.

The current congressional map used in the 2020 election:

A map of Kansas showing its current congressional districts, including counties and precincts, available on the Dave’s Redistricting app: www.davesredistricting.org.

A hypothetical congressional map drawn along county lines, based on 2020 Senate election results, that has two D-leaning districts and two R-leaning: 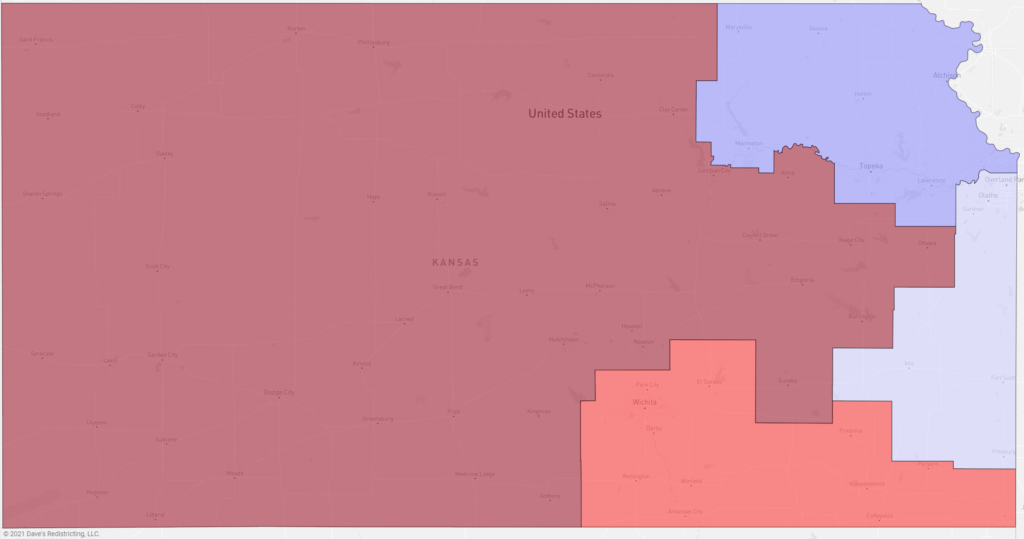 A hypothetical congressional map drawn along county lines, based on 2020 Senate election results, where all four districts lean R: 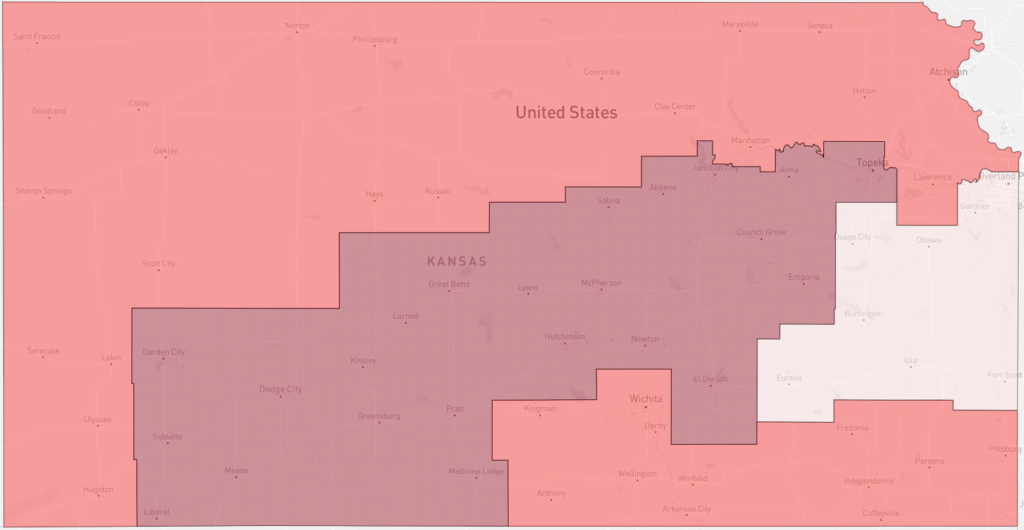 A better solution may be to get rid of the lines entirely and change to proportional representation.

The Fair Representation Act introduced in Congress last month would fundamentally change districting and the election process. Kansas would become one statewide district that elects four representatives. A multi-winner form of ranked-choice voting would be used to produce results that more proportionally reflect the vote total. In a four-winner district, candidates are elected once they win more than 20% of the total vote.

While 20% doesn’t sound like a lot, in 2020 that comes out to be about 271,000 votes. This is about 50,000 more than any of the congressional candidates received. With this system, more voters end up with a representative who they personally voted for.

This proportional system would be more responsive to changes in the electorate than before. Right now, it doesn’t matter if the margin of victory is 1% or 20%. As shown in an earlier Kansas Reflector commentary about proportional representation, our current elections allow a single political party to win 100% of the seats with less than 60% of the vote. With proportional representation, the number of seats won by each party would more closely track the percentage of votes their candidates receive.

While the Fair Representation Act is for federal elections, the Kansas Legislature could work to enact this proportional system for Kansas House and Senate elections by asking voters to pass a constitutional amendment. While a statewide 125-seat district would be impractical to say the least, districts of three to five seats could be drawn and use the same election method as in the Fair Representation Act.

There would be fewer lines to draw than before, and because candidates are elected proportionally, the usual gerrymandering tools of cracking and packing voters would be less effective.

The real beneficiaries of this reform would be the voters. In last year’s election, 45 Kansas House districts representing about 1 million people only had one candidate on the general election ballot. Proportional representation would make these districts more competitive and give voters a meaningful choice.

The Kansans who currently live in these safe districts, whether they are in Kansas City or Greeley County, should be the ones who decide their representative rather than politicians making that choice for them.

In a since-deleted tweet responding to a question about a potential contract extension for Kansas City Chiefs safety Tyrann Mathieu, Mathieu tweeted that he's "probably not" going to get a new deal in … END_OF_DOCUMENT_TOKEN_TO_BE_REPLACED

KANSAS CITY, Mo. — A manhole left uncovered is the source of concern after a woman damaged her car in Kansas City. The single-car crash happened at 11th Street and Tracy Avenue during the busy … END_OF_DOCUMENT_TOKEN_TO_BE_REPLACED

Kansas City, Missouri's COVID-19 emergency order was set to expire at the end of the month. But Mayor Quinton Lucas made it clear Friday that private businesses can still set their own rules.Any … END_OF_DOCUMENT_TOKEN_TO_BE_REPLACED

KANSAS CITY, MO (KCTV/AP) — All restrictions meant to slow the spread of the coronavirus were being rescinded as of midday Friday in Kansas City, Missouri, following guidance from the U.S. Centers for … END_OF_DOCUMENT_TOKEN_TO_BE_REPLACED