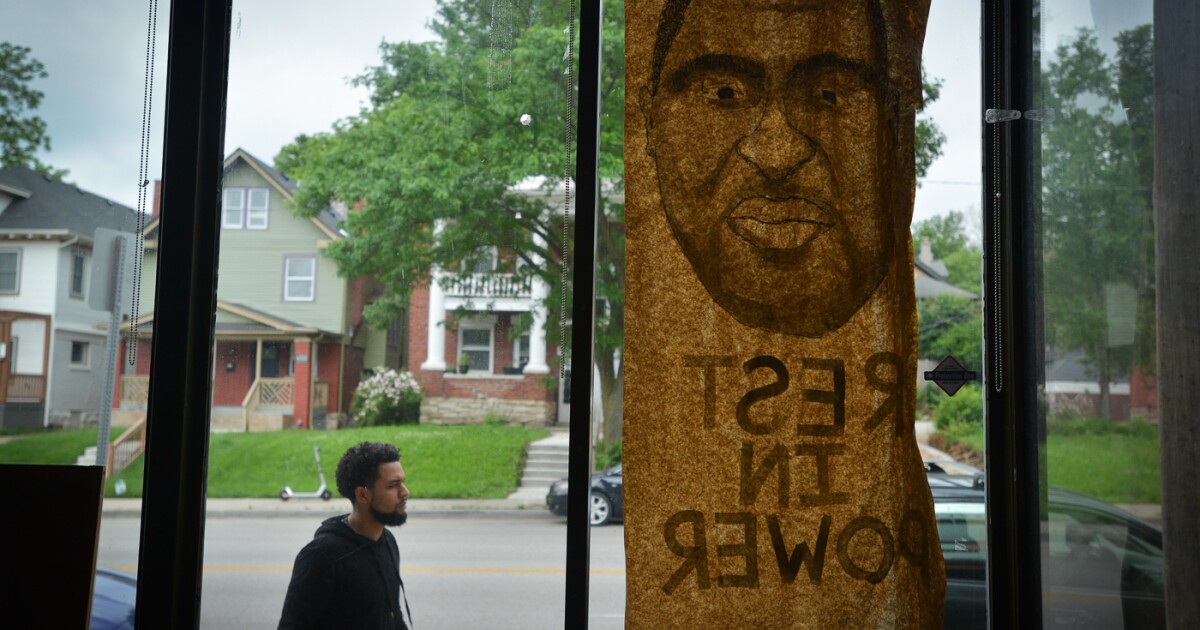 About 100 people marched through the Country Club Plaza on Tuesday night to commemorate the one-year anniversary of George Floyd’s killing and to protest racial injustice.

The crowd occasionally blocked traffic as it moved through the shopping district and chanted the names of local victims of police violence.

“These are all people that KCPD has taken away from their families,” said Steve Young, an organizer with the local racial equity group Black Rainbow.

Black Rainbow organizers also said they plan to hold protests at Kansas City police headquarters every Friday beginning in June, something the group did throughout much of last year.

Debbie Hendrix, another protest leader, said they picked the location for Tuesday’s event to send a message to the rest of Kansas City.

“Look how uncomfortable these cars is — look around,” she shouted through a megaphone as frustrated drivers honked their horns or looked for alternate routes.

“They hate to see us come down here, but we here. And we’re going to be down here all summer long,” she said.

Law enforcement was largely absent from the protests until the tail end of the march, when protesters returned to find Mill Creek Park cordoned off.

Protesters block the intersection of Ward Parkway and Broadway Boulevard on the Plaza at a march marking one year since the killing of George Floyd.

Police at the scene said an unrelated crime occurred while the protesters were away.

Earlier in the day, Dontavius Young, the owner of Equal Minded Cafe near 43rd Street and Troost Avenue, said he was using his business as an informal staging area for the march, and as a place for people to commiserate, socialize and learn more about the fight for racial justice.

“I like to stand for the people who can’t, and the people who don’t have a voice in those areas,” he said. “And I also just love finding solutions to things, so this is like the biggest problem that needs a solution in front of me.”

Being part of such a congregation is what poet and copywriter Darrien Case said he was doing to take care of himself on a day that was especially heavy with emotion for African Americans.

“Today I want to take fellowship and … just be mindful and present and let others enlighten me as I try to enlighten them as well,” said Case, who had never protested before Floyd’s murder. “This is a safe space for me.”

The commemoration of Floyd’s death came about a month after the conviction of Derek Chauvin, the former Minneapolis police officer who knelt on Floyd’s neck for more than nine minutes. That conviction, though, brought little solace for some Black Kansas Citians like Case.

“There’s no justice that can be attributed when a person dies (that) — you can’t give that breath back to their body,” he said. “There was accountability on the officer’s part, that’s all that happened, accountability for the first time in a long time.”

That verdict was one of only a few examples of progress over the last year that organizers and protesters were able to identify.

Steve Daniels, who has attended protests in Kansas City and Iowa, said the biggest change he has seen as a result of last year’s protests was more people talking about race and white privilege.

“But at the same time, it feels like we have such a long ways to go when it comes to this, because the level of activism went down so much a few months afterward,” said Daniels, who is white. “It felt like there’s sort of a complacency that kicked in, especially amongst the white populations that really turned out in the beginning.”

Young, the cafe owner, put it a different way.

“The challenges that (African Americans) go through, the hardships, a lot more people are aware of it, but there’s not very many people actually creating action steps on it,” he said. “It’s almost as if everyone is a visionary and no one wants to be an integrator, no one wants to do the groundwork.”

Any rhetorical headway made in the last year, though, came alongside more police killings and a major backlash in the form of a “Blue Lives Matter” movement.

“If we’re going to remember George Floyd, then we need to remember everybody,” said John Gilmore, an entrepreneur and mentor to African American youth. “We’d be doing this every day of the year, remembering a person who has been beaten and taken advantage of by police.”

This story has been updated to include information about a protest that took place on the Country Club Plaza Tuesday night.

In a since-deleted tweet responding to a question about a potential contract extension for Kansas City Chiefs safety Tyrann Mathieu, Mathieu tweeted that he's "probably not" going to get a new deal in … END_OF_DOCUMENT_TOKEN_TO_BE_REPLACED

KANSAS CITY, Mo. — A manhole left uncovered is the source of concern after a woman damaged her car in Kansas City. The single-car crash happened at 11th Street and Tracy Avenue during the busy … END_OF_DOCUMENT_TOKEN_TO_BE_REPLACED

Kansas City, Missouri's COVID-19 emergency order was set to expire at the end of the month. But Mayor Quinton Lucas made it clear Friday that private businesses can still set their own rules.Any … END_OF_DOCUMENT_TOKEN_TO_BE_REPLACED

KANSAS CITY, MO (KCTV/AP) — All restrictions meant to slow the spread of the coronavirus were being rescinded as of midday Friday in Kansas City, Missouri, following guidance from the U.S. Centers for … END_OF_DOCUMENT_TOKEN_TO_BE_REPLACED